Geneva, – New estimates released earlier this year by the World health Organization (WHO) suggest that in 2012 around 7 million people died – one in eight of total global deaths – as a result of air pollution exposure.

This finding more than doubles previous estimates and confirms that air pollution is now the world’s largest single environmental health risk. Reducing air pollution could save millions of lives.

In particular, the new data reveal a stronger link between both indoor and outdoor air pollution exposure and cardiovascular diseases, such as strokes and ischaemic heart disease, as well as between air pollution and cancer. This is in addition to air pollution’s role in the development of respiratory diseases, including acute respiratory infections and chronic obstructive pulmonary diseases.

The new estimates are not only based on more knowledge about the diseases caused by air pollution, but also upon better assessment of human exposure to air pollutants through the use of improved measurements and technology. This has enabled scientists to make a more detailed analysis of health risks from a wider demographic spread that now includes rural as well as urban areas. 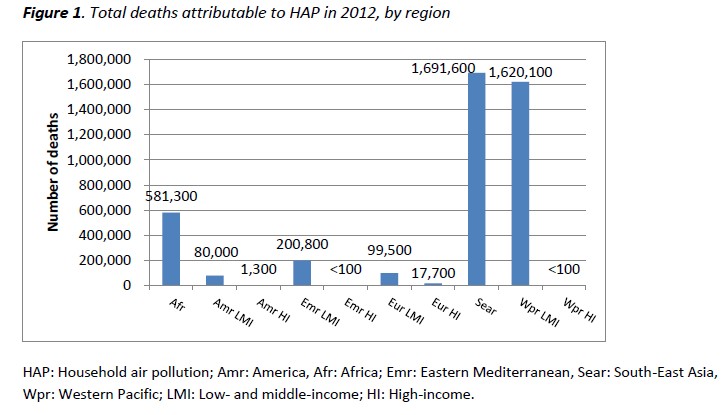 “Cleaning up the air we breathe prevents non-communicable diseases as well as reduces disease risks among women and vulnerable groups, including children and the elderly…” Dr Flavia Bustreo, WHO Assistant Director-General Family, Women and Children’s Health

“Cleaning up the air we breathe prevents noncommunicable diseases as well as reduces disease risks among women and vulnerable groups, including children and the elderly,” says Dr Flavia Bustreo, WHO Assistant Director-General Family, Women and Children’s Health. “Poor women and children pay a heavy price from indoor air pollution since they spend more time at home breathing in smoke and soot from leaky coal and wood cook stoves.”

Included in the assessment is a breakdown of deaths attributed to specific diseases, underlining that the vast majority of air pollution deaths are due to cardiovascular diseases as follows:

The new estimates are based on the latest WHO mortality data from 2012 as well as evidence of health risks from air pollution exposures.

Estimates of people’s exposure to outdoor air pollution in different parts of the world were formulated through a new global data mapping. This incorporated satellite data, ground-level monitoring measurements and data on pollution emissions from key sources, as well as modelling of how pollution drifts in the air.

Risks factors are greater than expected

“The risks from air pollution are now far greater than previously thought or understood, particularly for heart disease and strokes,” says Dr Maria Neira, Director of WHO’s Department for Public Health, Environmental and Social Determinants of Health. “Few risks have a greater impact on global health today than air pollution; the evidence signals the need for concerted action to clean up the air we all breathe.”

After analysing the risk factors and taking into account revisions in methodology, WHO estimates indoor air pollution was linked to 4.3 million deaths in 2012 in households cooking over coal, wood and biomass stoves. The new estimate is explained by better information about pollution exposures among the estimated 2.9 billion people living in homes using wood, coal or dung as their primary cooking fuel, as well as evidence about air pollution’s role in the development of cardiovascular and respiratory diseases, and cancers.

In the case of outdoor air pollution, WHO estimates there were 3.7 million deaths in 2012 from urban and rural sources worldwide.

Many people are exposed to both indoor and outdoor air pollution. Due to this overlap, mortality attributed to the two sources cannot simply be added together, hence the total estimate of around 7 million deaths in 2012.

“Excessive air pollution is often a by-product of unsustainable policies in sectors such as transport, energy, waste management and industry. In most cases, healthier strategies will also be more economical in the long term due to health-care cost savings as well as climate gains,” says Dr Carlos Dora, WHO Coordinator for Public Health, Environmental and Social Determinants of Health. “WHO and health sectors have a unique role in translating scientific evidence on air pollution into policies that can deliver impact and improvements that will save lives.”

Chexk here for an Informative Fact Sheet on Premature Deaths

The release of data is a significant step in advancing a WHO roadmap for preventing diseases related to air pollution. This involves the development of a WHO-hosted global platform on air quality and health to generate better data on air pollution-related diseases and strengthened support to countries and cities through guidance, information and evidence about health gains from key interventions.

Later this year, WHO will release indoor air quality guidelines on household fuel combustion, as well as country data on outdoor and indoor air pollution exposures and related mortality, plus an update of air quality measurements in 1600 cities from all regions of the world. 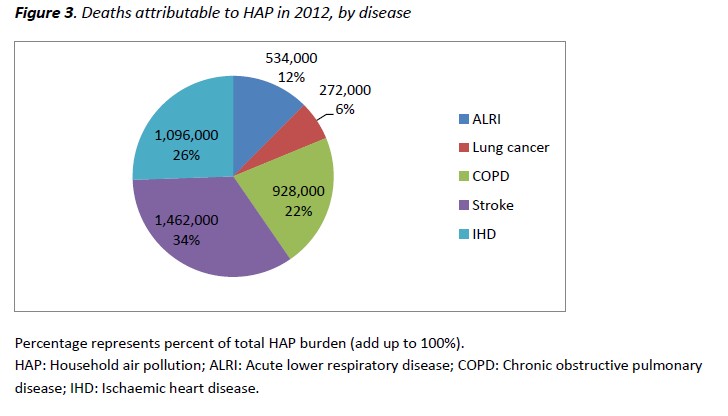 Reducing the environmental impacts of fracking