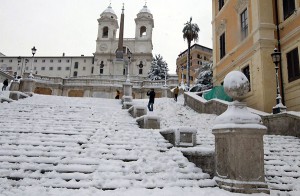 Snow and ice on the Spanish Steps in Rome

Patterns of winds and pressure systems traced by researchers to the decline in Arctic sea ice can transport cold air further south and create harsher winters in Eurasia.

LONDON, October 30, 2014 − A less-icy Arctic could mean that parts of Europe and Asia are twice as likely to experience severe winters, according to new research from Japan.

Masato Mori and fellow climate system researchers at the University of Tokyo report in Nature Geoscience that they see a connection between the loss of ice in the Barents and Kara Seas and the increased probability of colder winters in Eurasia.

Notoriously, the Arctic is one of the fastest warming regions of the planet, and scientists have repeatedly warned that the whole Northern seas could be free of ice by the summer of 2050.

The Japanese team performed 200 different simulations of global atmospheric circulation to disentangle the Eurasian winter effect. As sea ice declined in the two Arctic waters, so there arose persistent patterns of winds and pressure systems that, since 2004, have enabled the transport of cold air further south, and made a big freeze more likely.

There have already been suggestions that changes in Arctic sea ice could be linked to the ferocious recent winter in the north-eastern United States, and there is consistent evidence that the great Arctic melt will continue.

“We can expect these weather extremes to continue to occur, and maybe worsen”

But the researchers also ran their models forward well into the 21st century, and they don’t think things will get frostier in the long run for southern Russia, Mongolia and other such tracts of the interior.

“We conclude that the sea-ice-driven cold winters are unlikely to dominate in a warming future climate, although uncertainty remains,” they warn

Such calculations are provisional, and the Japanese scientists know their findings are tentative. But earlier research has suggested similar conclusions.

Peter Wadhams, who heads the Polar Ocean Physics Group at the University of Cambridge in the UK, said the study supported other, earlier analyses.

He warned: “Annual average global temperatures continue to rise, but the distribution of temperature through the year is giving us more extremes, which is highly damaging to food production. As ice continues to retreat, we can expect these weather extremes to continue to occur, and maybe worsen.”

Colin Summerhayes, a marine geologist and oceanographer with the Scott Polar Research Institute at the University of Cambridge, also said that more research was needed. But he added: “The counter-intuitive effect of the global warming that led to sea ice decline in the first place makes some people think that global warming has stopped. It has not.

“Although average surface warming has been slower since 2000, the Arctic has gone on warming rapidly throughout this time.” – Climate News Network