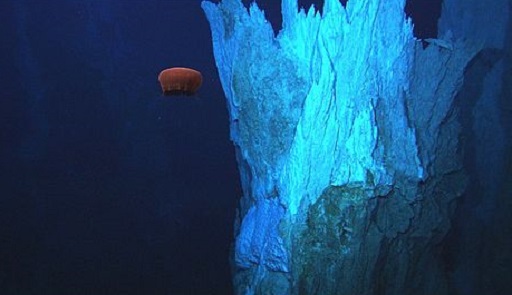 A jellyfish floats just above the seafloor of the deep Atlantic Ocean
Image: NOAA/OAR/OER via Wikimedia Commons

Researchers analyzing millions of oceanographic measurements believe they may finally have got to the bottom of the conundrum about why there is a slowdown in global warming despite greenhouse gas emissions rising.

LONDON, 22 August, 2014 − For years, researchers have puzzled over the temperature rises that haven’t happened – but scientists in China and the US believe they have cracked the mystery of the missing heat.

While calculations indicate that global average temperatures should be rising predictably, the planetary thermometers tell a different story.

But now Xianyao Chen, an oceanographer at the Ocean University of China in Ongdao, and Ka-Kit Tung, an atmospheric scientist at the University of Washington in Seattle, report inScience journal that they think they know where the notional extra heat has gone. It is at the bottom of the Atlantic Ocean.

And this time their conclusion isn’t based only on mathematical models and computer simulations. In their research − funded by the US National Science Foundation and theNational Natural Science Foundation of China – they analysed millions of measurements of temperature and salinity taken by oceanographic instruments since 1970, and tracked the pathways that the heat must have taken since the beginning of the 21st century.

But first, a restatement of the conundrum. For more than a century, climate scientists have known that higher levels of carbon dioxide in the atmosphere mean higher atmospheric temperatures. For more than 30 years, every investigation has confirmed this link. And for the last 30 years of the 20th century, as greenhouse gas emissions increased, so did average temperatures.

This rise has continued, with 13 of the 14 warmest years ever recorded all falling in the 21st century, but the rate of increase unexpectedly slowed.

Researchers had expected that there would be some sort of heat hiatus, but not during the first years of the century, and they have been scratching their heads and examining the data again.

Some think that the measurements may be incomplete, or that natural cycles, such as thePacific cooling event called La Niña, may be at play. Some have suggested that the pattern of trade winds may have a role in taking the warmth into the deep ocean, and some have suspected all along that the heat could be found far below the oceanic surface.

In the same week as the publication in Science, Reto  Knutti, a climate physicist at the federal technology institute ETH Zurich, and his colleague, Markus Huber, reported in Nature Geoscience that the apparent slowdown could be attributed to a cocktail of causes: a longer period of weaker solar irradiance – the sun has its own cycles of intensity − and to the cycle of El Niño and La Niña weather phenomena in the Pacific, and also to incompletely measured data.

But the Science report authors think they have an in-depth solution. “Every week, there’s a new explanation of the hiatus,” said Ka-Kit Tung. “Many of the earlier papers had focused on symptoms at the surface of the Earth, where we see many different and related phenomena. We looked at observations in the ocean to try to find an underlying cause.”

The oceans cover 70% of the planet, and are capable of storing 90% of the planet’s heat content. So the two Science report authors argue that a sudden shift in ocean salinity that corresponded with the slowdown of global warming could have triggered the movement of the heat to much deeper waters.

Saltier water is denser, sinks faster, and takes surface heat with it. As the two scientists see it, the depths of the North and South Atlantic have absorbed more heat in the last 14 years than the rest of the global ocean system put together.

This does not mean that global warming is not a problem: heat in the deep oceans is likely to come back to the surface, and to the atmosphere, sooner or later.

The changes in the Atlantic ocean circulation system are part of a natural cycle that seems to date back many centuries. The surprise discovery by Chen and Tung is that the heat is tucked away in the Atlantic and Southern Oceans, rather than the Pacific − the suspected hiding place until now.

The argument is a complex one, and the latest research probably hasn’t settled the matter.

“All these analyses of ocean heat content are interpreting small changes in ocean temperature, and it will need to be picked over and repeated by others before being fully accepted,” said Professor Andrew Watson, head of the Marine and Atmospheric Science group at the University of Exeter, UK.

And Piers Forster, professor of climate change at the University of Leeds in the UK, said: “Most importantly, this paper is another nail in the coffin of the idea that the hiatus is evidence that our projections of long-term climate change need revising down.

“Variability in the ocean will not affect long-term climate trends, but may mean we have a period of accelerated warming to look forward to.” – Climate News Network