Australia’s economy at risk if climate change not addressed

Australia risks increasing repair bills from extreme weather events and being unable to access capital for major projects if it does not get its response to climate change right, according to a new report. 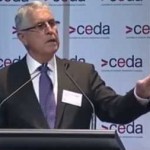 GLOBE-Net, July 22, 2014 – The Chief Executive of CEDA, the Committee for the Economic Development of Australia, the Hon. Stephen Martin, says climate change is both an environmental and an economic issue, despite recent comments from senior politicians that seemed to question the latter.

His comments accompanied the release of a major review of the impacts of climate on Australia’s economy (The Economics of Climate Change) released last month, in Melbourne.

“The undeniable fact is that Australia’s economy will be critically exposed on two significant economic fronts if we do not ensure an appropriate response to climate change,” he said.

“The first area that leaves our economy exposed if we don’t take action, relates to the consequences of increasing extreme weather events and the economic and social impact that these events have on Australia’s production capacity.

“We only have to look at the news in recent years, both at home and abroad to see the devastation of these events Cyclone Yasi, Black Saturday, the Queensland Floods, Hurricane Sandy, Hurricane Katrina and the repeated UK floods.

“Where these events have occurred in Australia they have had a direct impact on industry and on the hip pocket of most Australian’s from taxes used to fund drought relief packages to the Queensland flood recovery levy implemented in 2011.

“While most Australians are happy to help others in need during or following these events, if there are options to reduce impacts before they happen then we should be looking at them now.”

Professor Martin said a good example of where action could have made a significant difference is Roma, Queensland. Roma has endured several significant floods in recent years.

“If a levee to protect the town had been built in 2005, it would have cost $20 million. However, since 2008 $100 million has been paid out in insurance claims and since 2005 a repair bill of over $500 million has been incurred by the public and private sectors,” he said.

“Statistics show that the number of catastrophic weather events is increasing and the economic losses associated with these events are also trending up which is why we need a national approach to address these risks.

“What Australia requires is a framework for assessing climate risks and considering possible actions that may lower those risks.

“The first step in managing these risks should be the introduction by the Federal Government of a national risk register. This should include strategies to manage risks of adverse climate events both in the public and private sector.”

The second area where Australia stands exposed economically to the effects of climate change relates to the availability of capital to fund its infrastructure and other critical needs.

“Applying climate-related risk assessments when considering investment and financing decisions is an emerging trend globally. This trend is likely to have consequences for nationally significant industries in Australia, such as the resources sector, and associated asset values.

“Australian businesses and governments need to ensure they keep in step with international developments and have the options available to move to less carbon intensive industries and energy sources if we are to remain globally competitive.

Professor Martin said these could be undertaken through a ‘direct action policy’ if it was appropriately funded and targeted.

However, he said alone it is still unlikely to be enough to keep us in step with other economies, such as the two biggest – China and the US – who are both pursuing emissions reduction plans and are vitally important to our economy.

“In fact we appear to be one of the only countries trying to wind back its legislative approach to greenhouse gas emissions. Perhaps it’s time for a policy rethink on an emissions trading scheme,” he said.

Read more about the report – The Economics of Climate Change

Download the report – The Economics of Climate Change (pdf)