Biggest year ever for green bonds

Following a landmark green bond growth year in 2013, the labelled green bond market has once again experienced a year of incredible growth in 2014,

By year-end there had been $36.6bn of green bonds issued by 35 different issuers – that’s more than a tripling of the market! The final figure was boosted by a late flurry of green municipal bonds. 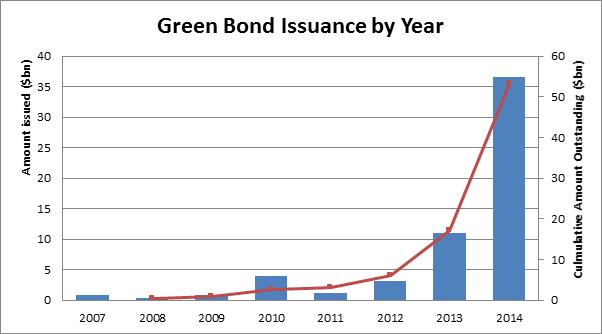 This exponential growth takes the total amount of green bonds outstanding to $53.2bn by the end of 2014.

So, what happened to cause this tripling of issuance? Well, corporate and municipal bond issuers joined the green party – big time – while development banks continued to be the backbone of green bond issuance. Let’s go through them each in a bit more detail.

True to form the big development banks still account for the majority of issuance with 44% ($16bn) of total green bond issuance in 2014. This is split amongst new green bond issuers and the veterans (EIB, EBRD, World Bank and IFC). 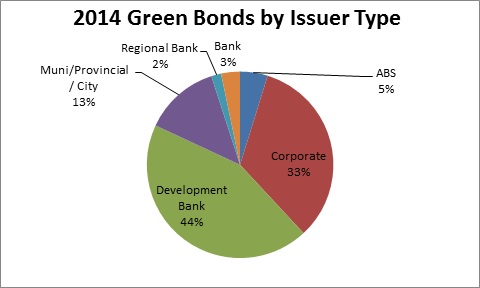 New entrants to the market were mainly national development banks that had been waiting in the wings for the right moment to issue a green bond.

These include banks such as Germany’s KfW, France’s AFD and Netherland’s NWB Bank. In addition to new issuers, we saw a diversification in product types with the World Bank issuing a series of retail investor focused green bonds, as well green bonds across 6 different currencies.

EIB continued to be a prolific issuer of green bonds (although they call them Climate Awareness bonds) and ended the year on top of the issuer table, across all issuer types, with $5.6bn green bonds issued in 2014. 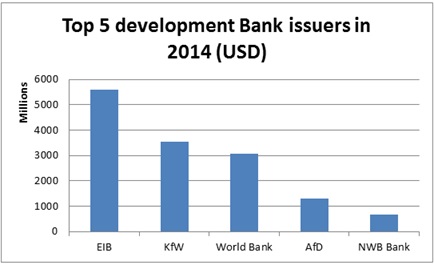 A new type of green bonds also came to the market; Toyota kicked the year off with a bang with a  $1.75bn green asset-backed bond in Q1. This bond showcased how proceeds from a bond backed by car leases and loans can be earmarked for future green vehicles.

Green corporate “earmarked” bonds helped create depth in the green market. Not only did the corporates bring scale, accounting for $12bn issuance, but they also offered a range of currencies -both great for liquidity in the market.

The largest corporate deal of the year was GDF Suez’s $3.4bn green bond (split into a EUR 1.2bn and EUR 1.3bn tranches) with proceeds going towards renewable energy and energy efficiency projects.

As the corporate green bond market matured, we also saw a move down the ratings with NRG Yield (rated Bb1 by Moodys) and Abengoa Greenfield SA (rated B by S&P) bringing high yield green bonds to the market in Q3. 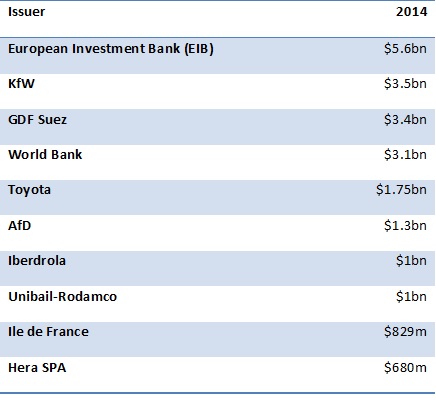 For example, Credit Agricole CIB used their green loan book to back $478m green retail bonds for Japanese investors over the year. This is great, as banks play a crucial role in the capital pipeline by providing loans and project financing to green issuers and projects.

After a successful inaugural bond, NRW, the German regional bank, chose to get a second opinion on its next offering, which proved its green credentials.  NAB (National Australia Bank) took it a step further with its inaugural green bond having certification against the Climate Bond Standard. 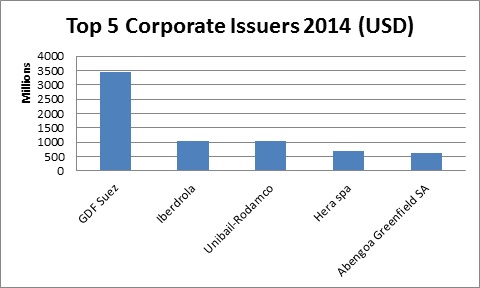 Green city bonds became popular mid-year with issuances from the Swedish City of Gothenburg and South Africa’s City of Johannesburg. Gothenburg was a trailblazing green city issuer with repeated green issues through the year, while Jo’burg was the first to show how green bonds can work for emerging market issuers.

Now, Bloomberg New Energy Finance’s 2014 green bond total is $38bn but it includes unlabeled ABS or project bonds. If we include CBI’s list of project bonds, which total $2.5bn in 2014, to our green labelled figure we make it $39bn!  Amazingly close to our $40bn prediction for 2014. 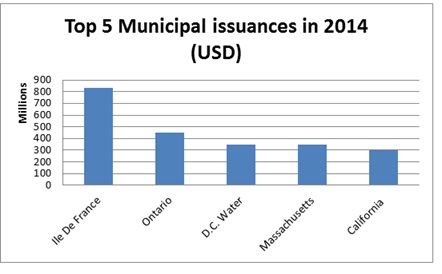 This difference in the end total is likely to be around how we carve up the numbers. CBI uses the Bloomberg announcement date for inclusion in the 2014 figures.

Here are the top 5 unlabeled project and ABS bonds with proceeds for green from 2014: 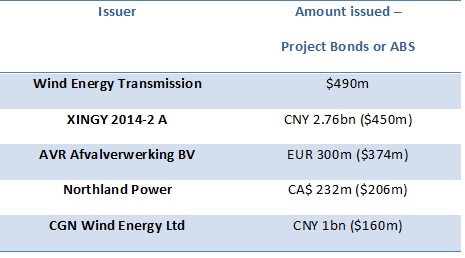 Not to be missed: A bunch of unlabeled project and ABS bonds funding green assets

Notes on the figures:

This article first appeared in Climate Bonds and is reprinted here with the kind permission of the authors and of Climate Bonds,