The tool, which can assess how companies might fare in the carbon-constrained economy, is now on the desks of the world’s most influential investors. 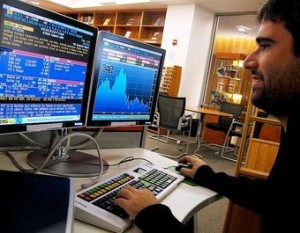 Bloomberg LP is now offering a Carbon Risk Valuation Tool through its terminal subscription service (seen here), which is available to more than 300,000 high-end traders, analysts and others. Credit: CUNY Graduate School of Journalism

Adding the analysis tool to Bloomberg’s customer network doesn’t guarantee that Wall Street analysts and large-scale investors will embrace it. But Bloomberg’s financial data, news and analysis is widely used throughout the financial community to help guide investment strategies, making it an influential platform from which to launch new valuation concepts. Subscribers pay about $20,000 a year for the service.

“As a company, we recognize that we have this distributive power,” Ravenel said. “So when we introduce things like this, we do have a unique ability to elevate the conversation a bit.”

“It’s a tall order and an ambitious kind of product because companies don’t disclose all the information that you need,” Gheit said. But, he added, “People are beginning now to say, ‘You know what, there’s something there—maybe we should pay more attention to this.'”

Bloomberg’s Ravenel said the inspiration for the new tool started with a report by the Carbon Tracker Initiative that concluded that the fossil fuel reserves already claimed by companies contain enough carbon to warm the world’s atmosphere well beyond the 2 degree Celsius limit over the next 40 years—and that those reserves may therefore become “unburnable.”

The reports described how a range of forces could devalue the carbon assets of many oil, natural gas and coal companies, and stressed that global limits on carbon emissions was merely the most obvious risk, not the only one.

[/stextbox]”We believe that investors are mistaken in assuming that there is only one pathway to stranding carbon assets, and in believing that continued uncertainty about the likelihood and timing of coordinated action by governments can justify a strategy of ignoring their carbon exposure,” the Generation Foundation said in its most recent report. “We believe that any such strategy is not only unwise, but increasingly reckless.”

Some of the other threats include regional, national or local carbon policies; regulations to cut pollution, limit water use or reduce health risks; mandates for saving energy or using alternative sources; advances that make rival power sources more attractive; and sociopolitical pressure from movements such as the fast-growing campaign to get universities, foundations and others to purge fossil fuel stocks from their investment portfolios.

Despite those risks, fossil fuel companies have plowed ahead with expensive new oil, gas and coal projects that will require funding in the billions of dollars. There are, for instance, about 1,200 coal plants on the books right now worldwide.

“I’ve talked to quite a few oil and mining companies about stranded assets, and the most consistent message that the companies give is ‘we’re not worried about stranded assets, because if you look at the [International Energy Agency] forecast, the Wood Mackenzie forecast and the BP Energy Outlook, demand is going to keep growing for coal and for oil up to 2030 or 2040. So this is not an issue,'” said Mackenzie of the Scottish Widows investment fund.

However, given climate-related regulatory threats and signs that energy demand in China might fall short of expectations, “it’s quite possible that the world will be radically different from the energy sector view,” Mackenzie said. “So it’s really important that the investment community doesn’t get sucked into one view of the world—and that’s where the Bloomberg [tool] comes in. It provides us with a different view of the world.”