GLOBE-Net, November 4, 2013 – According to a new PwC analysis, the world is on track to blow the 2°C carbon budget, estimated by the Intergovernmental Panel on Climate Change (IPCC) for the next 89 years, within 21 years.

This puts the world on a path consistent with potential global warming of around 4°C by 2100, the most extreme scenario presented in the recent IPCC 5th Assessment Report on climate science.

The results, from the 5th annual PwC Low Carbon Economy Index, examine the amount of energy-related carbon emitted per unit of GDP needed to limit global warming to 2°C.

The report warns that this level of warming “will have serious and far reaching implications.” Current investment planning cycles for major business and infrastructure investments now need to factor this into their decision making.

It finds that policies and low carbon technologies have failed to break the link between growth and carbon emissions in the global economy. The world’s energy mix remains dominated by fossil fuels: 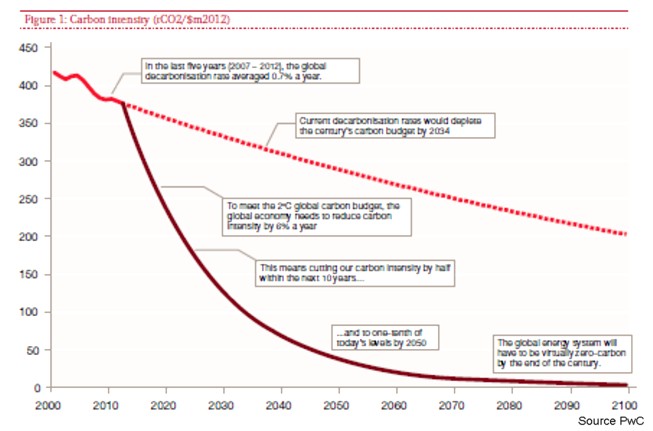 If the world continues at current rates of decarbonization, the carbon budget outlined by the IPCC for the period 2012 to 2100 would be spent in less than a quarter of that time, and be used up by 2034.

Emissions over and above that budget would be increasing the chances of dangerous climate change, with average warming of surface temperature projected to be beyond 2°C.

According to Jonathan Grant, director, PwC Sustainability & Climate Change, “G20 countries are still consuming fossil fuels like there’s no tomorrow. Despite rapid growth in renewables, they still remain a small part of the energy mix and are overwhelmed by the increase in the use of coal. The results raise real questions about the viability of our vast fossil fuel reserves, and the way we power our economy. The 2 degrees carbon budget is simply not big enough to cope with the unmitigated exploitation of these reserves.”

Energy efficiency progress was one bright spot in the analysis. 92% of the small reduction in carbon intensity achieved last year is down to improvements in energy efficiency with the remaining 8% through a shift towards a cleaner energy mix. Italy, the UK and Turkey rank as the most energy efficient economies in the G20, consuming less energy for every $m of GDP generated than their counterparts. But the report warns that there is a limit to which we can cut energy use per unit of GDP.

Five years ago, our global decarbonization target was 3.5% per annum, now the challenge nearly doubles to 6%. This is over eight times our current rate of decarbonization, a level never achieved before, let alone sustained over decades.

To achieve what the IPCC deems the ‘safe’ amounts of carbon in the atmosphere to limit the extreme impacts of climate change, would require halving carbon intensity within the next ten years, and reducing it to one-tenth of today’s levels by 2050. By 2100, the global energy system would need to be virtually zero-carbon.

Jonathan Grant, director, PwC sustainability and climate change, noted “Our analysis assumes long term moderate economic growth in emerging economies, and slow steady growth in developed economies.  But, failing to tackle climate change is unlikely to result in such a benign scenario of steady growth. Something’s got to give, and potentially soon. This has implications for a raft of investments in carbon intensive technologies that are currently being planned and executed today.”