17 February 2015 – Despite the dramatic recent weakening in global energy markets, ongoing economic expansion in Asia – particularly in China and India – will drive continued growth in the world’s demand for energy over the next 20 years. According to the new edition of the BP Energy Outlook 2035, global demand for energy is expected to rise by 37% from 2013 to 2035, or by an average of 1.4% a year.

The Outlook looks at long-term energy trends and develops projections for world energy markets over the next two decades. The new edition was launched today in London by Spencer Dale, BP’s group chief economist, and Bob Dudley, group chief executive.

“After three years of high and deceptively steady oil prices, the fall of recent months is a stark reminder that the norm in energy markets is one of continuous change,” said Spencer Dale. “It is important that we look through short term volatility to identify those longer term trends in supply and demand that are likely to shape the energy sector over the next 20 years and so help inform the strategic choices facing the industry and policy makers alike.”

The Outlook projects that demand for oil will increase by around 0.8% each year to 2035. The rising demand comes entirely from the non-OECD countries; oil consumption within the OECD peaked in 2005 and by 2035 is expected to have fallen to levels not seen since 1986. By 2035 China is likely to have overtaken the US as the largest single consumer of oil globally.

[stextbox id=”custom” float=”true” align=”right” width=”300″ bcolor=”d2d0d1″ bgcolor=”dbdbdb” image=”null”]The US becomes energy self-sufficient by 2021. And by 2035 could be exporting 9% of its total energy supply. Meanwhile, China overtakes the EU as the world’s largest importing country/region by 2025.[/stextbox]

By the 2030s the US is likely to have become self-sufficient in oil, after having imported 60% of its total demand as recently as 2005.

Demand for natural gas will grow fastest of the fossil fuels over the period to 2035, increasing by 1.9% a year, led by demand from Asia.

Half the increased demand will be met by rising conventional gas production, primarily in Russia and the Middle East, and about a half from shale gas. By 2035, North America, which currently accounts for almost all global shale gas supply, will still produce around three quarters of the total.

Coal had been the fastest growing of the fossil fuels over the past decade, driven by Chinese demand. However over the next 20 years the Outlook instead sees coal as the slowest growing fossil fuel, growing by 0.8% a year, marginally slower than oil. The change is driven by three factors: moderating and less energy-intensive growth in China; the impact of regulation and policy on the use of coal in both the US and China; and the plentiful supplies of gas helping to squeeze coal out from power generation.

As demand for gas grows, there will be increasing trade across regions and by the early 2020s Asia Pacific will overtake Europe as the largest net gas importing region. The continuing growth of shale gas will also mean that in the next few years North America will switch from being a net importer to net exporter of gas.

The overwhelming majority of the increase in traded gas will be met through increasing LNG supplies. Production of LNG will show dramatic growth over the rest of this decade, with supply growing almost 8% a year through the period to 2020. This also means that by 2035 LNG will have overtaken pipelines as the dominant form of traded gas.

Increasing LNG trade will also have other effects on markets. Over time it can be expected to lead to more connected and integrated gas markets and prices across the world. And it is also likely to provide significantly greater diversity in gas supplies to consuming regions such as Europe and China.

Energy self-sufficiency in North America – which is expected to become a net exporter of energy this year – and increasing LNG trade are also over time expected to have fundamental impacts on global energy flows.

[stextbox id=”custom” float=”true” align=”right” width=”300″ bcolor=”d2d0d1″ bgcolor=”dbdbdb” image=”null”]China overtakes the US as the biggest nuclear producer with its share of the world total rising from 4% today to 30% in 2035.[/stextbox]

Increased oil and gas supplies in the US and lower demand in the US and Europe due to improving energy efficiency and lower growth will combine with continuing strong economic growth in Asia to shift the energy flows increasingly from west to east.

The Outlook also considers global CO2 emissions to 2035 based on its projections of energy markets and the most likely evolution of carbon-related policies. Its projection shows emissions rising by 1% a year to 2035, or by 25% over the period, on a trajectory significantly above the path recommended by scientists as illustrated, for example, by the IEA’s “450 Scenario.” 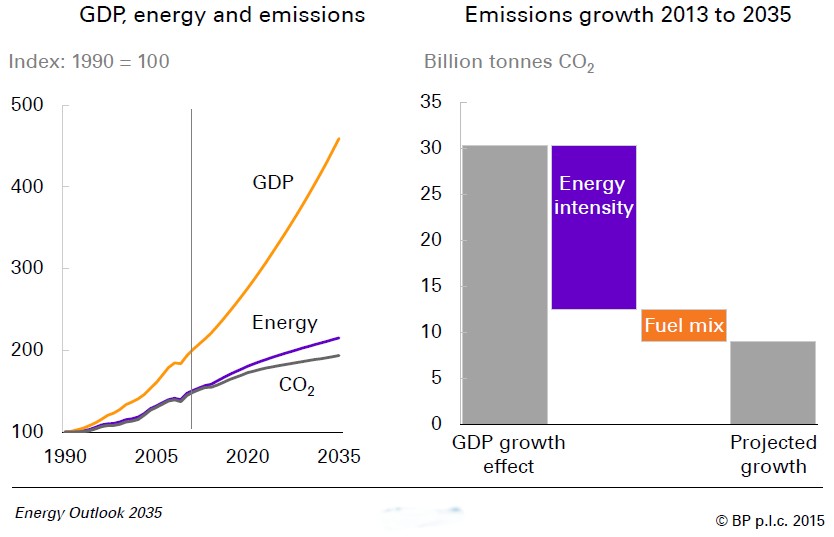 To abate carbon emissions further will require additional significant steps by policy makers beyond the steps already assumed, and the Outlook provides comparative information for possible options and their relative impacts on emissions. However, as no one option is likely to be sufficient on its own, multiple options will need to be pursued. This underlines the importance of policymaking taking steps that lead to a meaningful global price for carbon which would provide incentives for everyone to play their role in meeting the world’s increasing energy needs in a sustainable manner.

Looking ahead, the shares of nuclear and hydro continue to decline, but the scaling up of renewables is sufficient to lift the aggregate non-fossil share from 32% in 2013 to 38% by 2035. Within the OECD, renewables dominate the growth of non-fossil power, and contribute 90% of the net growth in power generation from all sources.

The cost of renewables are expected to fall significantly over the Outlook, due to technological advances, learning-by-doing, and economies of scale. Both solar PV and wind appear to be following well-established learning curves, with costs falling rapidly as production increases.

Geopolitical risks – which on some measures have increased in recent years – have potentially important implications for energy markets. On the supply side, the level of disruptions to oil in recent years has been well above the historical average.

Changing perceptions of geopolitical risks may also spur policy choices that lead to lasting changes to energy demand as well as supply. Historical examples include: the French decision to increase its dependence on nuclear energy, and the approval of the Trans-Alaska pipeline in the US (both following the early 1970s oil shocks); and China’s acceptance of growing oil imports to fuel economic development (after an extended period of policy focused on maintaining self-sufficiency).

Commenting on the Outlook, Bob Dudley concluded: “The energy industry works on strategies and investments with lifespans often measured in decades. This is why an authoritative view of the key trends and movements that will shape our markets over this long term is essential… and is precisely why this Outlook is so valuable.”

Use “Accelerators” To Achieve More and Get There Fast