The report, Building on the best: Keeping Canada’s climate promise, used analysis by Navius Research to examine the best climate change policies and solutions being used in Canada and how they can be applied at the federal level.

“By adopting the strongest policies already in place in parts of the country, Canada could develop a unifying climate change strategy that would allow us to meet our international commitments and targets,” said David Suzuki Foundation science and policy manager Ian Bruce.

As many have pointed out, including Canada’s auditor general and UN secretary general Ban Ki-Moon, Canada does not have plans in place to keep its promise to the world.”

“We have made-in-Canada solutions that are proven to work,” Bruce said. 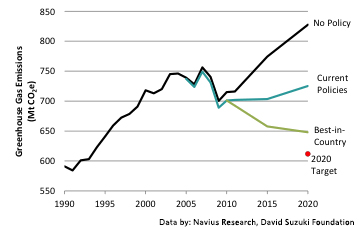 “By advancing the strongest policies that now exist at provincial and municipal levels, Canada can be a global leader while realizing the benefits of cleaner air, less traffic congestion, greater innovation and a diversified economy.”

According to the report, if Canada had adopted some key provincial policies in 2008, emissions would be 77-million tonnes lower by 2020, bringing us close (within 5.6 per cent) to the international emissions target. 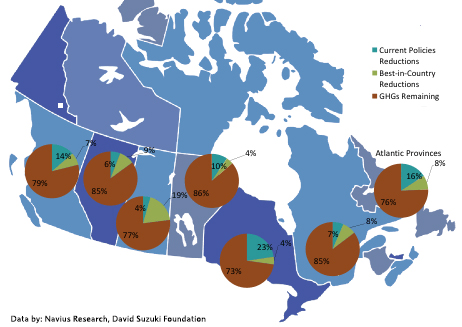 By implementing these and other policies soon, Canada could still become a leader on climate change while diversifying its economy and protecting the health of its citizens.

Some of the policies examined include the B.C. carbon tax, Ontario’s Green Energy and Economy Act and phase-out of coal-fired power, Quebec’s and Nova Scotia’s regulatory cap on emissions, public transit strategies in Ontario, and federal fuel-efficiency standards for cars.

A recent survey by the Environics Institute for Survey Research in partnership with the David Suzuki Foundation found 88 per cent of Canadians want the federal government to commit to significant new actions to reduce greenhouse gas emissions.

“We have a great opportunity to implement climate solutions in Canada and to share our knowledge,” Bruce said. “For example, adopting best-in-Canada policies on renewable energy, staged phase-out of coal power and pricing carbon pollution in Saskatchewan and Alberta would be three times more effective in reducing carbon pollution than current policies. And Canada could become an innovator and developer of clean energy solutions and export those solutions to the world.”

The federal government committed in 2009 to reduce greenhouse gas emissions by 17 per cent by 2020. In an October 2014 report, the auditor general’s office stated it was concerned that Canada was not on track to meet its international target because the federal government’s plan to shrink carbon pollution “has been ineffective and the action it has taken has been slow and not well co-ordinated” among provinces.

See GLOBE-Net article “New approach to climate change talks needed“
Governments should not insist that an agreement be an internationally legally-binding treaty.

Carbon pricing is not taboo

Carbon pricing is, perhaps, one of the most poorly understood and maligned climate policies in Canada, notes Navius Research in a Technical Annex to its report. Alberta, British Columbia and Québec have been leaders in North America in the implementation of carbon pricing. While each province has taken a different approach, the benefits of the policy have been demonstrated, it states.

Québec – California to Collaborate on Electrification of Transportation