Where does Canada stand on the Global Green Economy Index?

The Global Green Economy Index™ (GGEI) measures both the green economic performance of 60 countries and how experts assess that performance.

The GGEI was the first index of its kind, launched in 2010, and today is widely referenced and utilized by policy makers, international organizations, civil society and the private sector.  Like many indices, the GGEI is a communications tool that provides nations with a relative measure of their green economic performance and how expert practitioners judge it.  Both components of the GGEI are critical to better understanding how countries can leverage data analytics and strategic communications to advance their standing in the global green economy.

Who are the top Green Economy countries?

The GGEI results reveal a similar observation for a variety of non-European states – including Ethiopia, Mauritius, Rwanda in Africa and Colombia, Chile and Peru in Latin America – again suggesting a need for these states to better position their green economies on the international stage.

Where does Canada stand? 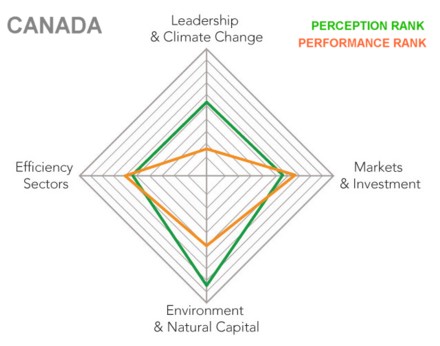 On the one hand, Canada’s green economy is quite strong, both in terms of perception where it ranks near the top 10 overall and performance, where Canada does very well on the Efficiency Sectors and Markets & Investment dimensions.

But Canada’s performance score near the bottom of the Leadership & Climate Change dimension drags down its overall result significantly. The country’s head of state, media coverage, behavior in international forums and climate change performance are all extremely low as measured by the GGEI.

While these areas obviously need improvement from a performance point of view, the survey respondents don’t appear to take much notice, as Canada still ranks near the top 20 of the GGEI perception survey on Leadership & Climate Change.

The full report and the survey methodology are available here.

Climate Finance for Cities and Buildings: A Handbook for Local Government