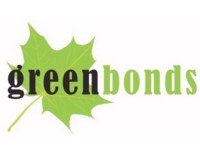 December 8, 2014 – Investors embraced Canadian climate-themed bonds in a big way in 2014, pushing the total holdings of Canadian issuers to US$26-billion in funds that are aimed primarily at projects to combat climate change and mitigate its impact.

This is  according to Sustainable Prosperity’s Canadian companion to the third annual Bonds & Climate Change report prepared by the UK-based Climate Bonds Initiative.

What the report found is that there was – within the broader universe of “climate-themed” bonds – a significant increase in Canadian-issued investments labelled specifically as “green bonds”.

Canadian-issued “green bonds” grew from zero in mid-2013 to US$1.2-billion by October 2014 thanks to three issuers: TD Bank, Export Development Canada and the Province of Ontario.(See Globe-Net article “Ontario to become first government in Canada to issue “green bonds”)

The global market for “green bonds” is over US$51bn outstanding according to the latest Bonds & Climate Change report.Climate-themed bonds are used to finance or re-finance projects that address climate.

They range from wind farms and solar and hydropower plants, to rail transport and building sea walls in cities threatened by rising sea levels. Only a small portion of these bonds have actually been labelled as green or climate bonds by their issuers.

The total investment in Canadian-issued climate-themed bonds in 2014 was recorded at US$26-billion, an increase of 78 per cent over 2013 due in part to the inclusion of $15.7-billion in unlabelled bonds issued by Hydro-Quebec.

Many large hydro companies were not included in previous reports due to concerns over assets in tropical areas. Hydro Quebec, which has no tropical hydro assets, is now included.

In addition to the growing scale and frequency of green bond issuances, the market is experiencing the steady development of market infrastructure and standards.

Some of the largest green bond issuers, investors, and underwriters came together this past year to create the Green Bond Principles, with a view to building the transparency of and confidence in the green bonds market.

Alex Wood, Senior Director of Policy and Markets at Sustainable Prosperity says the explosive growth of green bonds over the past 18 months, particularly in Canada, shows that they are now mainstream investments.

“Three years ago, bonds labelled as ‘green’ or ‘climate’ were a niche market pioneered by a handful of multilateral development banks such as the World Bank and International Finance Corporation,” says Wood.

“This has now changed with the issuance of bonds labelled as ‘green’ or ‘climate’ growing rapidly in the past year in Canada and worldwide, and the work that has gone into standardizing practices in the green bonds market by private sector investors.

Wood adds that all three “green bond” issues in Canada in 2014 were over-subscribed, which indicates a pent-up demand for this type of investment. A big part of the attraction is the high quality of the Canadian issues, with 92 per cent rated as investment grade. 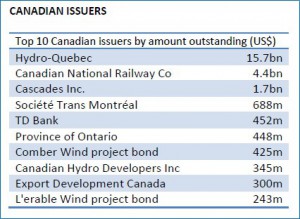 “The result is the creation of large pools of capital to fund green infrastructure projects that help the environment and the economy,” he says.

Wood expects another bond issue from the province of Ontario, which has said it foresees at least $1billion a year in future issuances. Other provinces and municipalities could follow suit with climate-themed bonds of their own.

The success of the TD Bank and EDC issuances may spur other Canadian financial institutions to issue green labelled bonds as well, he adds. There are also opportunities for small scale green investments such as community bonds to finance local green infrastructure projects.

“In the year ahead there will be significant developments in Canada and the rest of the world,” says Wood.

“The challenge will be to ensure that all market operators work to demonstrate that the market is truly shifting capital to climate solutions rather than facilitating green wash. The Climate Bonds Initiative and Sustainable Prosperity will continue to work together to grow the scale of the market and the capital available to sustainable economic development in a way that is both rapid and credible.”

The Expert Technical Committees that work on expanding the Standard’s coverage of assets (water, agriculture & forestry and bioenergy) rely on the expertise of the Industry Working Group to ensure that proposed eligibility for assets that can be used to back climate bonds are bond-market friendly. Essentially, the Industry Working Group’s role is to create a bridge between climate science and the bond market.

Why invest in energy efficiency