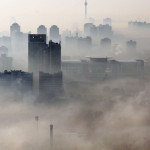 BEIJING (November 14, 2014) — China can achieve economic development, energy security and reduce pollution at the same time, according to a major new study conducted by Tsinghua University.

The study, China and the New Climate Economy, was released in Beijing on the back of a landmark announcement by China and the United States on their climate change targets. It provides details of the policy and regulatory framework that would enable China to meet its new climate change and air pollution targets.

The study was undertaken as part of a series of country studies linked to the work of Global Commission on the Economy and Climate. A similar study Seeing Is Believing: Creating a New Climate Economy in the United States, was released in Washington this October. It outlined a number of specific measures to reduce emissions that would be economically beneficial for the United States.

China is facing a series of challenges as it attempts to secure sustainable economic growth and cleaner air, while also reducing the risk of dangerous climate change. China and the New Climate Economy highlights how, with good policies, it can meet these challenges while maintaining growth of up to 7-8% in the near-term and 5% by 2030.

It indicates that China can ensure healthy economic development, improve energy security and reduce climate risks through collaborative governance on economic, energy and environmental goals.” said Chen Yuan, Vice Chairman of the National Committee of the CPPCC, who is also a member of the Global Commission on the Economy and Climate.

The report finds that targets for reducing coal and limiting greenhouse gas emissions can also help promote technological innovations and improvements in resource productivity. Such improvements will be critical for China to avoid the middle income trap as investment-driven growth declines and the country faces increasing resource constraints.

Simply relying on end-of-pipe regulation will not be sufficient to tackle the air pollution problem in China. Even with the strictest end-of-pipe treatment measures, almost half of Chinese cities risk failing to meet air quality standards in 2030

They will also help China increase energy security by decreasing reliance on imported fossil fuels. Without these measures dependence on foreign supply is expected to reach 75% for oil and over 40% for natural gas by 2030, leaving key sectors of the Chinese economy exposed to the risk of price volatility.

Speaking at the launch of the report, former President of Mexico Felipe Calderón, Chair of the Global Commission on the Economy and Climate said: “We do not need to choose between fighting climate change or growing the world’s economy. That is a false dilemma. This important study highlights the significant opportunities for China to continue to develop while reducing air pollution and the risk of dangerous climate change.”

To meet air quality targets a combination of accelerated economic restructuring, energy conservation, fuel switching will also be necessary. Such measures will be particularly important in the Jing-Jin-Ji and Yangtze River Delta regions where pollution is most severe.

The report indicates that enforcing these accelerated measures would not only achieve overall air quality improvements in Chinese major cities, but also have a significant impact on greenhouse gas emissions. The environmental and health benefits of these measures would help offset the small economic costs of climate action.

Teng Fei, Professor at the Institute of Energy, Environment, and Economy, at Tsinghua University and an author of the report said: “China has the opportunity to prove to the world that it is possible to achieve the goals of increasing people’s standard of living, while reducing the risk of climate change at the same time. We can expect better access to education in cities, more employment opportunities as well as better air quality and health. This is not only the ‘Chinese Dream’, but also the world’s dream. China will lead the world to by providing a blueprint for a new climate economy.”

Speaking at the event, Andrew Steer, President and CEO of World Resources Institute, a think-tank headquartered in Washington DC, said: “In a week when the leaders of the United States and China stood shoulder-to-shoulder and made serious commitments to tackle climate change, it is heartening to see this study which provides detail of the policies needed to make these commitments real.”

Read the report at http://newclimateeconomy.net/content/china-and-new-climate-economy