It’s been called an historic agreement − a game changer in the battle to combat climate change. But can China and the US fulfill the promises in their announcement of plans to cut carbon emissions?

LONDON, 13 September, 2014 − China went to considerable lengths to make sure that this week’s Asia Pacific Economic Co-operation summit in Beijing was a successful affair.

Factories were shut down, car traffic and even cremations were restricted, and schools and most government offices were closed. As a result, delegates experienced blue skies over the Chinese capital, rather than the city’s notorious smog.

But the most newsworthy and surprising event came on the summit sidelines, with President Xi Jinping and President Obama warmly shaking hands as they unveiled plans for radical cutbacks in emissions of CO2 − the most potent of the climate-changing greenhouse gases (GHGs).

China and the US are by far the world’s biggest emitters of CO2, with China accounting for more than 20% of total global CO2 emissions and the US 15%.

Meanwhile, China for the first time announced a date when it says its CO2 emissions will peak − 2030 − and then taper downwards. It also said it would be ramping up its already ambitious renewables programme, with the potential of cutting back on CO2 emissions at an earlier date.

In addition, Obama and Xi – despite their considerable differences on territorial, trade and other issues − announced plans to expand co-operation on various research and technology projects related to climate change.

“The United States of America and the People’s Republic of China have a critical role to play in combating global climate change, one of the greatest threats facing humanity,” said a White House statement.

“ The seriousness of the challenge calls upon the two sides to work constructively together for the common good.”

Christian Figueres, the executive secretary of the United Nations Framework Convention on Climate Change (pictured right), said the Beijing announcement was an important step towards a better and more secure future for human kind.

“Together, these announcements send a clear signal to the private sector and the financial markets on where global policy is now heading,” Figueres said. 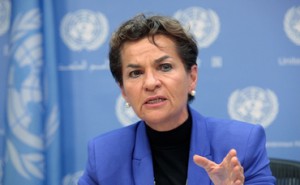 “These announcements have the potential to unleash and accelerate the kinds of entrepreneurship and innovation needed to propel all economies towards ever greater levels of ambition – if not significantly exceeding their ambitions – en route to a low-carbon, resilient world over coming years and decades.”

However, amid the euphoria, some big questions remain:

Global CO2 emissions are still increasing, despite years of climate change negotiations and increased warnings from the scientific community about the dire consequences of a warming world. Experts say cutbacks have to be achieved much sooner than 2030 in order to halt runaway climate change.

Doubts persist about how realistic these cutbacks are. Under the plans, China will need to produce an extra 800 to 1,000 gigawatts of power from wind, solar and nuclear sources over the next 15 years − more power than its coal plants produce today. And experts point out that Beijing’s timeline for reducing emissions does not represent a binding target.

Obama is going to have a tough time pushing these plans through. Republicans, who now control both houses of Congress, have already denounced the measures, saying they will seriously damage the US economy.

Negotiations on tackling climate change and limiting emissions of GHGs have been held on a worldwide basis under UN auspices. Such bilateral agreements as the one announced by the US and China could undermine the global consensus and weaken UN processes.

But the news from Beijing has been generally welcomed in the scientific community. 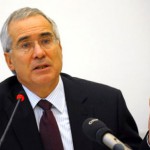 Nicholas Stern, lead author of the 2006 Stern Review on the economics of climate change, says the US/China announcement will give momentum to a new global deal on climate due to be negotiated in Paris late next year.

“President Obama and President Xi should be congratulated for demonstrating real leadership with this historic announcement,” Stern told the Financial Times in London. – Climate News Network

Communities and Energy – Builders and Developers Leading the Way