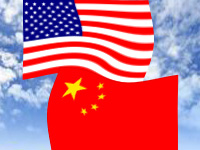 New research suggests that global emission reduction targets are achievable if China and the US – the world’s worst emitters of greenhouse gases − work together to reduce pollution levels.

LONDON, 29 October, 2014 – Tentative steps have been taken by China and the US towards co-operating on climate change − mainly focusing on relatively modest technological schemes connected with more efficient and less polluting power generation.

But a new report calls on the two countries to be far more ambitious, and says that if the two adopt global best practice on climate change policy, total global greenhouse gas emissions (GHGs) would be radically reduced, and the goal of limiting the global average temperature rise to 2˚C by 2050 could be achieved.

Limiting the temperature rise to 2˚C above pre-industrial levels by 2050 is considered to be essential if catastrophic climate change is to be averted, although some in the scientific community have questioned the relevance of having such a target.

The new report − a collaboration between the Ecofys energy consultancy, the Climate Analytics research group and the Potsdam Institute for Climate Impact Research (PIK) – says that, together, China and the US are responsible for about 35% of global GHG emissions.

“If they scale up action to adopt the most ambitious policies from across the world, they would both be on the right pathway to keep warming below 2˚C,” says Bill Hare, senior scientist at PIK.

“This needs to include dramatically reducing their use of coal, in order to achieve the deep decarbonisation needed in getting CO2 emissions from coal back to 1990 levels by 2030.”

The report compares the actions of both countries in their most energy intensive sectors – electricity production, buildings and transport.