Cleantech To Rebound in 2014 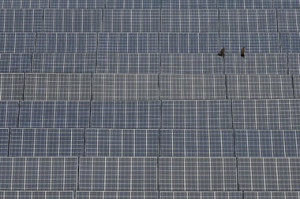 GLOBE-Net, December 9th, 2013 – Continuing an annual tradition, Kachan & Co., leading providers of market research and advisory services for the global cleantech industry, today issued predictions for clean technology markets in 2014 and found more reason to be optimistic about cleantech in the new year than in the two previous years.

The company, with offices in San Francisco, Toronto and Vancouver, has just published its latest annual set of predictions for the cleantech sector in detail.

In brief, the predictions include:

Gradual cleantech recovery in 2014
Kachan finds parallels in the cleantech wave to other technology booms of the last 50 years, and a number of reasons for optimism when comparing the cycles. A recent downturn in venture capital investing in cleantech becomes less threatening, the company asserts, when viewed in the historical context of how venture capital always spikes early in emerging categories, later to be augmented with other sources of capital.

In addition to an analysis of patterns in venture funding in previous bubbles vs. what’s occurring today in cleantech, the company also cites overall investment levels into clean and green innovation and projects, examines cleantech’s position on the Gartner hype cycle, contemplates lessons from models like the technology adoption life cycle and factors in a recent recovery in publicly traded cleantech funds and other metrics. 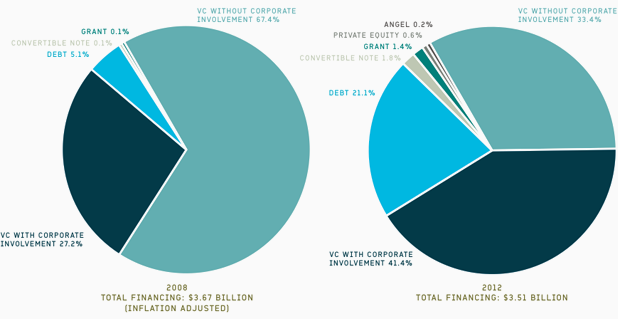 While venture capital was the dominant source of clean technology financing in California in 2008, it played a lesser role in 2012. Source: CB Insights, Collaborative Economics. Excludes project finance and unattributed investments.

“After 20 years in technology, the more we looked at the data, the more we realized we’d seen this movie before,” said Kachan Managing Partner Dallas Kachan. “After an initial frothiness and correction, there’s always a resetting of expectations and execution and a gradual ‘climb out’ of the trough. And climbing out of the trough is where we are today in cleantech.”

Term cleantech to stay alive and well
While some believe the phrase cleantech has fallen from favor, Kachan expects the term to persist in the global business lexicon through 2014 and beyond.

The peak in global search traffic for the term cleantech and its subsequent decrease and stabilization mirrors the Gartner hype cycle. Is a gradual climb up again in the cards, as the hype cycle suggests? We predict yes. Source: Google Trends.

Some high profile investors, lawyers and global multinationals had started distancing themselves from the phrase in recent years, but the company notes that the majority of the world, citing Google search data, is still enthusiastically embracing the term as shorthand for environmental and efficiency-related technology innovation.

The company predicts investors and service providers who recently distanced themselves from the cleantech meme may restore cleantech-related teams at their firms, noting that demand at the largest companies in the world for clean and green products and services is driving the cleantech recovery.

Crowdfunding emerges as viable in unexpected ways
In 2014, Kachan expects equity and debt-based crowdfunding platforms to catch their stride and serve as legitimate channels for cleantech vendors and project developers to raise modest amounts of capital.

Kachan predicts that certain capital efficient cleantech companies will be able to raise hundreds of thousands of dollars for themselves in equity or debt using horizontal crowdfunding platforms like AngelList or FundersClub, or vertical industry-specific debt and equity portals like Mosaic, SunFunder or other emerging platforms. Under current regulations, such crowdfunded raises may ultimately be feasible up to $1 million per company per year in the U.S.

“The key to success in crowdfunding in 2014 and beyond will be marketing,” says Kachan, pictured left. “Don’t count on a web site to spread the word about your offering. Be in a position to market your offering yourself.” Dallas Kachan will be a featured speaker at GLOBE 2014. Check out GLOBE 2014 here.

Underperformance in EV sales, and risks to growth rates
Electric vehicles (EVs) are selling slower than analysts’ predictions. Only 150,000 are expected to be sold worldwide in 2013. Kachan believes 2014 will see continued slower-than-expected growth.

The company partly cites fuel efficiency innovations in internal combustion engines (ICE) and related technologies for undermining the aggressive uptake once expected for electric vehicles. It also cites an increasing number of fuel cell vehicle announcements in 2013 from the world’s leading automakers—which also caused a surprise doubling or more in the share price of many automotive fuel cell companies in 2013.

Rare earth profits to be made in unexpected places
Kachan does not expect fortunes will be made in 2014 in rare earth element mining companies. In the short term, it predicts recycling will be one of the few rare earth plays with upward motion.

Much of the industry has been focused on new mines to meet growing demand for rare earths. But Kachan cites a Belgian company at the forefront of recycling technologies for critical metals that is recovering rare earths like tellurium, and a U.S. Department of Energy program that involves melting old magnets in liquid magnesium to tease rare earths out.

Watch for more companies to be introducing rare earth recycling plays, Kachan forecasts, and for electronics manufacturers to design their products to be easier to break apart for rare earth element recovery.

Other potentially appealing rare earth plays in 2014 include new processes at existing mines to improve processing yields and the development of alternative materials to obviate the need for rare earth elements, according to Kachan.

Read the firm’s predictions for cleantech / greentech in 2014 in their entirety.

About Kachan & Co.
Kachan & Co. is a cleantech research and advisory firm with offices in San Francisco, Toronto and Vancouver. The company publishes research reports on clean technology trends, data for industry professionals via its Cleantech Watch™ service, and offers consulting services to large corporations, governments, service providers and cleantech vendors. Kachan staff have been covering, publishing about and helping propel clean technology since 2006. For more information visit www.kachan.com

EU vote attempts to drive up price of carbon-trading credits