The emerging power of microgrids

Across the globe, regulators, policy makers and businesses are collaborating on creating a new and better electricity delivery system — one that will be more stable and secure, cleaner and cheaper, and able to accommodate larger shares of variable renewable energy sources. Prepare for the arrival of the renewable energy microgrid.

July 3, 2014 — Over many decades, the centralized power grid — a one-way flow of electricity, generated by large, remote power plants and distributed over miles of transmission lines to homes and businesses — succeeded in delivering electricity across continents to billions.

But in recent years the system’s shortcomings have become increasingly evident. The conventional grid is largely dependent on planet-warming fossil fuels. And because it’s so big and interconnected, it’s vulnerable to massive disruption by natural disasters and susceptible to physical or cyberattack.

In August 2003, 50 million people in parts of Ontario, Canada, and eight U.S. states lost electricity when a sagging power line in a suburb of Cleveland touched an overgrown tree limb and malfunctioned, triggering a cascading sequence of events resulting in the largest blackout in American history. More recently, Superstorm Sandy in the U.S. and Typhoon Haiyan in the Philippines have shown the havoc extreme weather can wreak.

Across the globe, regulators, policy makers and businesses are collaborating on creating a new and better electricity delivery system — one that will be more stable and secure, cleaner and cheaper, and able to accommodate larger shares of variable renewable energy sources. Prepare for the arrival of the renewable energy microgrid.

Most of the time, a microgrid will deliver electricity within its boundary — a military base, say, or university campus — while maintaining a connection to the larger electricity grid. But in an emergency, such as a wildfire, earthquake or hurricane, a microgrid can be safely isolated from the conventional grid and continue to deliver power.

The precursors to microgrids are simpler  systems consisting largely of a central power plant serving a single building or campus with backup provided by diesel generators. But these systems have drawbacks. By relying on a single generator, they are less secure, and because they usually burn fossil fuels to generate electricity, they perpetuate dependence on finite fuels that fluctuate in price and contribute to climate change. 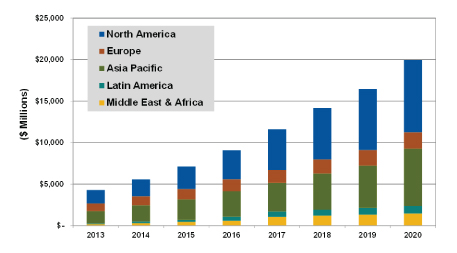 Microgrid vendor revenue is expected to nearly triple by 2020 as concern about conventional grid vulnerability grows while the cost of energy storage and renewable energy infrastructure decline.

Microgrids under development today benefit from two trends: the declining cost of energy storage and the increasing affordability of renewable energy, especially wind and solar power. Lithium-ion battery prices have fallen by 40 percent since 2010.

Solar panels are 80 percent cheaper than five years ago. Wind turbine prices have fallen up to 35 percent from their 2008 high. With affordable energy storage, surplus solar or wind electricity can be stored for later use, enabling microgrids to dispatch power as needed and operate around the clock.

Taken together, the price reductions make it possible to bring together variable clean energy and storage into renewable energy microgrids that can support, or operate independently from, the main electricity grid.

Renewable Energy to power 25 percent of electricity in the Americas