Ottawa, February 27, 2015 – Investments in Greenhouse Gases (GHG) emissions-reduction technology funded in part by the Climate Change and Emissions Management (CCEMC) Corporation will add more than $2.4 billion (2007 $) and 15,017 person-years of full-time jobs to the Canadian economy.

These conclusions are part of a Conference Board of Canada analysis, Investing in GHG Emissions-Reduction Technology: Assessing the Impact.

As part of Alberta’s climate change strategy, the CCEMC was established in 2009 as an independent organization with a mandate to reduce GHG emissions and help Alberta adapt to climate change. From 2011 to 2016, it is estimated that the CCEMC will help contribute over $1.3 billion (2007 $) to projects aimed at reducing GHG emissions.

These investments are mainly concentrated in Alberta. However, Quebec, Ontario, Manitoba, Saskatchewan, and British Columbia have and will also receive direct funding for projects.

Investments leveraged through the CCEMC program will contribute $1.95 billion to Alberta’s economy and add 12,244 person-years of full-time-equivalent employment. Some of the largest supply-chain and induced impacts are occurring in the construction, manufacturing, and commercial services industries. 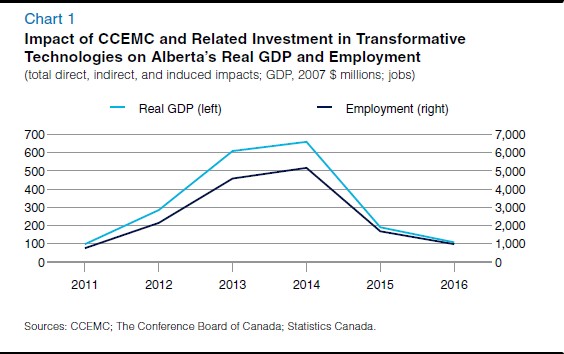 While the bulk of the supply-chain impacts are occurring in Alberta, benefits from investments leveraged through the CCEMC program are also taking place in Quebec, Ontario, Manitoba, Saskatchewan, and British Columbia.

Ontario will benefit the most, with real GDP expected to rise by $240 million. British Columbia, Quebec, Manitoba and Saskatchewan will also benefit from sizeable lifts to economic activity and employment. The real GDP gains range from $22 million in Manitoba to $106 million in British Columbia.

Controlling GHG emissions will continue to be an important policy priority in Canada and around the world, notes the report. Promoting investments in new technologies that curb emissions can help slow global warming, generate new industries, and diversify Alberta’s economy. This study does not address these additional benefits of CCEMC and related investments, however.

The report, Investing in GHG Emissions-Reduction Technology: Assessing the Impact, was funded by the Climate Change and Emissions Management (CCEMC) Corporation and is available from the Conference Board’s e-Library.

The Conference Board of Canada will host a live webinar, Clearing the Air: The State of Greenhouse Gas Emissions in Canada, on Wednesday, April 22, 2015 at 11:00 AM EDT