GLOBE-Net, August 15, 2014– Last month  the National Hockey League released its 2014 Sustainability Report, the first of its kind for the League and considered by many to be one of the most significant sustainability assessments of this magnitude produced by a professional sports league.

Increasing energy efficiency and reducing energy demand have become a top priorities for all NHL arena operators, and the energy that goes into making those shiny ice surfaces that make professional hockey such a joy to watch is high on the list of things to do.

One challenge noted was the energy intensive nature of hockey games, including energy and water use, which accounts in large part for the league’s enormous “carbon footprint”–approximately 530,000 metric tons of greenhouse gas emissions per year.

‘The solution may lie in an experimental program, tested in British Columbia, earlier this year.’

Since January 2014, 10 selected ice arenas throughout BC have been busy testing an innovative ice making technology called REALice that promised to reduce the electrical and gas energy used in making arena ice.

The traditional ice resurfacing process still in use in many places around the world involves preheating the resurfacing water to remove micro air bubbles so that the water will freeze hard and strong.

REALice technology achieves the same result, by using a different process. Instead of applying heat to remove air bubbles, the water is spun in a vortex – like a whirlpool or tornado – forcing any trapped air bubbles to be sucked out of the water. The beauty of this process is that it requires no moving parts or heat; it simply relies on water pressure and uses ambient temperature water.

Image one: Tornado. Natural phenomena creating a strong low pressure zone alone the axis – uncontrolled! Image two: Vortex Process Technology cut open – creating a stable and constant low pressure zone only with the pressure of the water in a controlled environment. Image three: Illustration of the multiple vortices spun together like a rope. Image four: degassing process: collecting of the air bubbles in the low pressure zone.

The technology has been specifically designed and manufactured using a 3D printing process to create a controlled vortex as the water flows through the device. The intense and structured vortex creates hydrodynamic cavitation and increases the velocity of the water to promote the separation of air bubbles from the water source. The technology has its roots from nature looking at a tornado creating a strong low pressure zone in the center.

The FortisBC efficient ice rink resurfacing pilot is now completed and 9 of the 10 arenas have now successfully adapted their operations to use the REALice technology. Ice at these facilities has been reported to be clear, hard, and strong, with ratings of ice quality ranging from ‘acceptable’ to ‘excellent’. Since the pilot program, 4 more arenas have started using REALice – saving on energy costs and lowering emissions.

Considering that ice resurfacing occurs up to 2,400 times per season with over 600 liters  each session, the ability to switch to cold water offers big potential energy savings.

Across the 10 pilot arenas, an increase of the slab temperature was required at all sites and an average increase of 3°F was observed. This means that the refrigeration plant runs 3°F warmer. Each 1.8°F in temperature equals approx. 20,000 kWh. A reduction in the ice slab thickness on average by 0.25 – 0.5 inch was also noted. Adding these together, the reductions in electrical usage were estimated to be 60,000 kWh and higher.

The Kerry Park Recreational Center compared average electricity consumption for 2011 – 2013 to consumption in 2014 after the system was installed. No other major energy changes were performed in that time. Performance period savings showed 720 kWh per day. 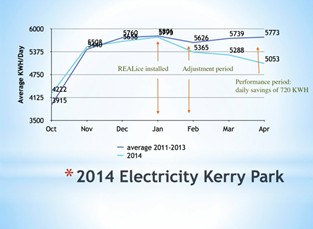 FortisBC quantified the average savings across the participating arenas in this large scale pilot at 330 GJ in natural gas per year.

Other Cost Savings and Advantages

FortisBC reports the REALice technology will be eligible to receive incentives through the company’s Commercial Custom Design Retrofit Program and these rebates could be available for FortisBC customers sometime early 2015.

The full FortisBC report and internal reports from some participating arenas are available for download here: