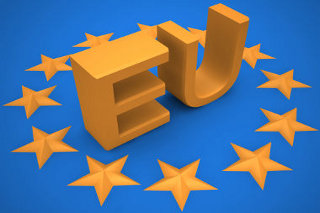 The proposals also mean lower environmental impacts and reduced greenhouse gas emissions. The plans ask Europeans to recycle 70 per cent of municipal waste and 80 per cent of packaging waste by 2030, and ban burying recyclable waste in landfill as of 2025. A target is also included for reducing marine litter along with food waste reduction objectives.

The review to strengthen waste targets in existing directives is put in the context of an ambitious drive towards fundamental transition from a linear to a more circular economy. Instead of extracting raw materials, using them once and throwing them away, the new vision is for a different economic model. In a circular economy, re-use, repair and recycling become the norm, and waste is a thing of the past.

Keeping materials in productive use for longer, reusing them, and with improved efficiency would also improve EU competitiveness on the global stage. This approach is set out in a Communication which explains how innovation in markets for recycled materials, new business models, eco-design and industrial symbiosis can move us towards a zero-waste economy and society. 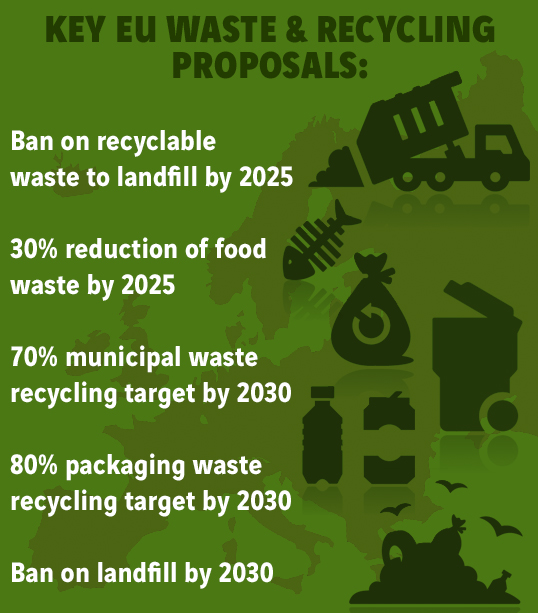 Environment Commissioner Janez Potocnik argued: “We are living with linear economic systems inherited from the 19th Century in the 21st Century world of emerging economies, millions of new middle class consumers, and inter-connected markets. If we want to compete we have to get the most out of our resources, and that means recycling them back into productive use, not burying them in landfills as waste.

Moving to a circular economy is not only possible, it is profitable, but that does not mean it will happen without the right policies. The 2030 targets that we propose are about taking action today to accelerate the transition to a circular economy and exploiting the business and job opportunities it offers.”

European Commissioner for Research, Innovation and Science Máire Geoghegan-Quinn commented: “Research and innovation are the keys to success for the Circular Economy, which is why we are proposing a joined-up approach today. Alongside a supportive regulatory framework, our new Horizon 2020 programme will contribute the know-how necessary to shape a resource-efficient, green and competitive low-carbon economy in the EU.”

The Communication shows how new growth and job opportunities will emerge from a more efficient use of resources. Greater efficiency will be driven by innovative design, better performing and more durable products and production processes, forward-looking business models and technical advances to turn waste into a resource.

The package that accompanies the Communication aims to create a framework to help the circular economy become a reality, with policies that are better inter-linked, smart regulation and active support from research and innovation. This will – says EU Commission – unlock investment and attract financing while promoting a strong role for business and participation by consumers.

The package also suggests that resource productivity should be measured on the basis of GDP/Raw Material Consumption, and that a improvement of 30 per cent by 2030 could be considered as a possible candidate for a headline target in the forthcoming review of the Europe 2020 Strategy.

Other proposals taken forward by the Commission:

The legislative proposals refer mainly to the Waste Framework Directive, the Landfill Directive and the Packaging and Packaging Waste Directive. In addition to the targets review, waste legislation will be simplified, and co-operation between the Commission and Member States will be stepped up to ensure better implementation. Minimum operating conditions for extended producer responsibility schemes will be laid down. Tailor-made approaches will be implemented for specific waste streams, such as marine litter, phosphorus, construction and demolition, food, hazardous and plastic wastes.

The package will be forwarded to the European Parliament and EU member states for adoption. The debate promises to be tense, as many EU employers’ organisation representing the continent’s companies, reject the idea of waste targets.

EU to promote job opportunities in the green economy