EU vote attempts to drive up price of carbon-trading credits

BRUSSELS—The European Parliament voted Tuesday in favor of reinvigorating Europe’s carbon trading program despite the differences in the region over energy policy.

The legislation will help to restore financial incentives for an industrial shift away from fossil fuels and toward renewable energy. Policy makers and industry leaders have vigorously debated the effectiveness of carbon trading due to a near collapse in carbon prices. The parliament rejected similar measures in April of this year. 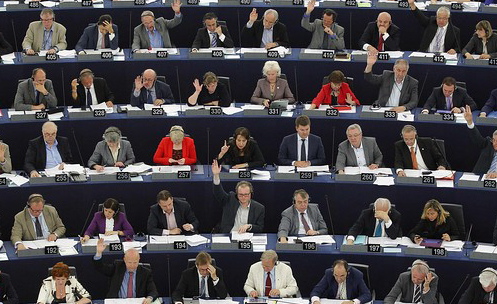 European Parliament voted in favour of “backloading” CO2 permits by 385 votes to 284, with 24 abstentions

The Wall Street Journal reported that, “The price of emitting one metric ton of CO2 rose immediately after the vote to over €4.70 ($6.10), from under €4 before the vote, according to data from IntercontinentalExchange Inc. ICE +0.94%”.

Since 2005, Europe’s Emissions Trading System is the largest and most ambitious effort yet to use markets to regulate greenhouse gases.

Under the program, industries like steel mills and coal-fired power plants have to obtain permits for their permitted emissions of carbon dioxide — these CO2 allowances can be obtained either through allocations from regulators or bought at auctions.

One allowance permits a company to emit one metric ton of carbon dioxide.

The favourable vote on Tuesday will enable officials to move forward with the proposal to keep back or freeze the auctioning of 900 million carbon allowances over the next three years.

The idea is to increase the price of each carbon credit. When the European Parliament voted against rescuing the carbon-trading program in April prices were less than €3.

Analysts said that keeping back the 900 permits is intended to reduce an oversupply of the permits that had resulted from less demand for electricity during the economic downturn.

Poland, a major source of coal, said it would continue to fight the proposal while those major European utilities that have made big investments in renewable energy embraced the legislation.

“The next step is now for the [European] Council to take a decision,” on the proposal, said Connie Hedegaard, EU commissioner for climate action. “The sooner, the better, so that we can move on to the structural reform” of the Emissions Trading System, she said.

The European Council, consisting of leaders from EU countries, will negotiate with the parliament on a final compromise proposal, including for how long the auction of the permits will be delayed. Once an agreement is reached, it is usually adopted formally.

Clean Capitalism: Financing Sustainable Innovation will be discussed at GLOBE 2014 taking place March 26-28, 2014 in Vancouver Canada, where practical solutions and innovative emission-reducing technologies will be on display. Check here for more information.

GLOBE 2014 Features Foremost Innovators in Business of the Environment Conference