Europe can save EUR 45 billion in its pursuit of renewables

GLOBE-Net, May 15, 2013 – Building and expanding renewable energy installations in the wrong locations is costing EUR 45 billion in unnecessary investment. This is the conclusion of a new study by Siemens at a Rountable held in Brussels preparatory  to the World Energy Congress (WEC) to be held in Daegu, South Korea later this year.

Siemens has analyzed the electrical power producing systems across Europe and identified considerable potential for optimization, especially in connection with plans to expand power generation from renewable energy sources.

The crux lies in the choice of location: If installations were built at the sites in Europe that offer the highest power yields, some EUR 45 billion of investment in renewables could be saved by 2030. This figure already includes the associated extension of the power grid.

As a comparison: around EUR 10 billion were invested in new solar and wind power generating installations in Germany in 2012. “In Europe, just the new photovoltaic capacity alone to be built by 2030 amounts to about 138 gigawatts. If these facilities were erected at the sunniest sites, we could save 39 gigawatts of solar equipment – for the same power yield.

The choice of site is crucial to the efficiency and economy of wind power, as well,” notes Michael Süß, member of the Corporate Executive Committee of Siemens AG and CEO of Siemens’ Energy Sector, against the backdrop of the 1st European Energy Congress in Brussels.

In an ongoing study, Siemens is working in cooperation with the Technical University of Munich to examine energy systems worldwide with the aim of ascertaining their utilization rate of resources, reliability of supply, sustainability and cost-efficiency.

Based on the realization that billions are being wasted every year as a result of inefficiencies in worldwide energy systems and markets, the study intends to precisely identify and quantify these losses, and to propose solutions.

Siemens will present its findings at the world’s most important energy gathering, the World Energy Congress (WEC), to be held in Daegu, South Korea in October 2013.

The company is hosting six Round Table discussions around the globe prepartory to the October Congress.

The first Round Table in Brussels focused on the European energy system.

Siemens has spotlighted four main levers for optimizing energy systems worldwide that can be more or less effective depending on the regional characteristics of the power grids and the power plant fleet:

Energy systems around the world vary broadly owing to their regional conditions, and are constantly changing. Norway, for instance, thanks to its favorable topology, can rely almost exclusively on hydropower. At the same time it is a major producer of natural gas, most of which it exports. By contrast, very little of its abundant hydropower is presently exported via long-distance transmission lines, despite the great demand for imbalance (i.e. balancing) energy in many countries of Europe. 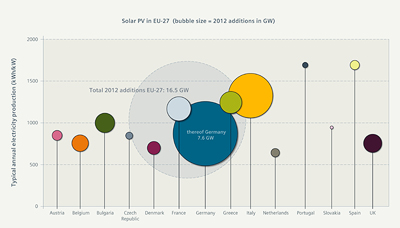 Looking to the future, Great Britain and Germany have opted for large-scale use of renewable energy resources for their power systems.

The UK intends to expand its offshore wind power capacity to meet one quarter of its power demand by 2020, while in Germany wind power’s share is to rise to 15 percent by 2030. Germany wants to generate 80 percent of its power from renewable sources by 2050. Wide fluctuations in power generation due to changing weather conditions thus dictate that large-scale energy storage or high-capacity exchange arrangements with other countries be in place. See Solar PV Potential in Figure abvove. Click here to enlarge)

The United States is currently experiencing an unprecedented natural gas boom because the high-pace exploitation of non-conventional deposits is making local natural gas up to two-thirds cheaper than in Europe. Gas-fired power plants are thus set to play a major role in U.S. power generation in the future.

The U.S. may even be on its way to changing from one of the biggest importers to one of the biggest exporters of fossil fuels. In Asia, by contrast, due to the already high and still growing demand for energy and because of the region’s strong dependence on imports, natural gas is currently about five times as expensive as in the U.S.

In its study, Siemens is examining these regional situations with allowance for predicted future developments, and identifying the implications for neighboring energy markets. One of the aims is to determine what approaches are most suitable from national and global economic perspectives for creating reliable and sustainable energy systems with high efficiency but still at affordable power prices.

Further interim findings are to be presented and discussed on June 4 in Moscow, on July 9 in Juno Beach, Florida, on August 1 in Beijing and on September 4 in Abu Dhabi. A preliminary overall analysis is to be presented in Daegu, South Korea, on October 15.

The ‘Renewables and the Changing Energy Landscape’ will be a major topic at GLOBE 2014, the next in the celebrated GLOBE Series Conferences on the business of the environment taking place in Vancouver Canada, March 26-28, 2014. Reserve your place now. Check here for more details.

Measuring the Wealth of Nations – Using a New Gauge