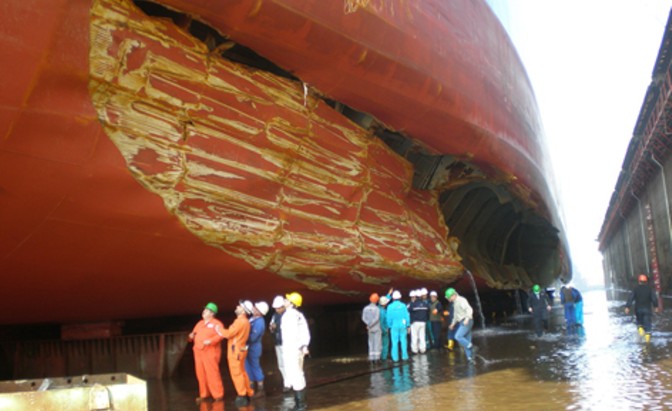 Evidence of the success of double-hull tankers: The Norwegian tanker SKS Satilla collided with a submerged oil rig in the Gulf of Mexico in 2009 and despite this damage, did not spill any oil. (Texas General Land Office)

January 1, 2015 was the deadline which the landmark Oil Pollution Act of 1990 (OPA-90) specified for phasing out single-hull tankers in U.S. waters. That act, passed after the 1989, required that all new tankers and tank-barges be built with double hulls.

Recently constructed single-hull tankers were allowed to operate, but 25 years after the Exxon Valdez, those vessels are now at the end of their operational life and will no longer be able to carry oil as cargo.

Counting Down to a New Era

There won’t be a dramatic change-over. Most of the tankers calling on U.S. ports have had double hulls years before this deadline. However, one ship which was not switched over to a double hull soon enough was the tanker Athos I. This ship, carrying 13.6 million gallons of heavy crude oil, struck a submerged anchor in the Delaware River and caused a relatively large, complicated oil spill near Philadelphia, Pennsylvania, 10 year ago.

In 1992, two years after the Oil Pollution Act, the International Convention for the Prevention of Pollution from Ships (the MARPOL Convention) was amended to require all newly built tankers have double hulls. MARPOL has been ratified by 150 countries, representing over 99 percent of merchant tonnage shipped worldwide.

Left, the single-hull tanker Exxon Valdez ran aground on Bligh Reef in Prince William Sound, Alaska, March 24, 1989, spilling 11 million gallons of crude oil. This spill inspired the Oil Pollution Act of 1990, which required the phase out of single-hull tankers and tank-barges by January 1, 2015. Right, another single-hull tanker, the Athos I, hit a submerged anchor in the Delaware River in 2004 and spilled more than 263,000 gallons of heavy crude oil. (U.S. Coast Guard)

Stay out of Trouble by Going Double

So, what is the big issue around single vs. double-hull ships? Historically, tankers carrying oil were built with a single hull, or single shell.

While we measure oil in barrels, it is not actually shipped that way. Instead, oil is pumped into huge tanks that are part of the structure of tankers and barges.

For vessels with a single hull, one plate of steel is all that separates the oil on board from the ocean. If the hull were punctured from a collision or grounding, an oil spill is pretty much guaranteed to follow.

On the other hand, a ship with a double hull has two plates of steel with empty space in between them. The second hull creates a buffer zone between the ocean and the cargo of oil.

Naval architects have debated the merits of various hull designs in reducing oil spills, and using a double hull, essentially a hull within a hull, was selected as the preferred vessel design.

However, the double hull requirements only apply to tankers and tank barges. Container ships, freighters, cruise ships, and other types of vessels are still built with single hulls. While these ships carry a lot less oil than a tanker, a large non-tank vessel can still carry a lot of fuel oil, and some have caused some pretty big spills, including the 2007 oil spill caused by the cargo ship Cosco Busan in San Francisco Bay. 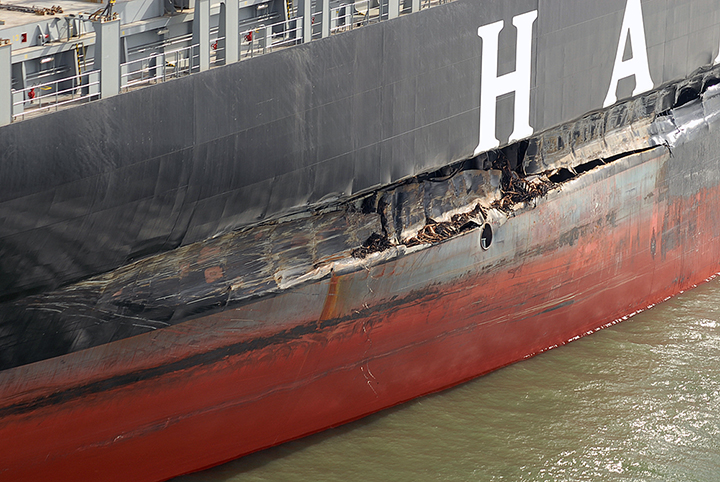 Of course, double hulls don’t prevent all oil spills from tankers either, but the design has been credited with reducing the amount spilled, especially in the cases of low-speed groundings and collisions.

And some pretty spectacular collisions have resulted in double-hull tankers not spilling a drop.

Twenty years after the Exxon Valdez oil spill, the Norwegian tanker SKS Satilla collided with a submerged oil rig in the Gulf of Mexico. The collision tore a huge hole in the side of the oil tanker, but, thankfully, none of the 41 million gallons of crude oil it had on board was spilled.

Canada a leader in phase out

In Canada the phase out of single-hulled tankers began in 2003.

Canadian regulations also require all oil tankers operating in waters under Canadian jurisdiction to be double hulled or to have equivalent protection as of January 1, 2015. This means a single hull oil tanker is not allowed to carry oil in Canada.

The double hull requirements for oil tankers are set out in the Vessel Pollution and Dangerous Chemicals Regulations.  Under these Regulations, all tankers must have double hull construction or equivalent protection as of January 1, 2015.

Under the provisions of the MARPOL International Convention for the Prevention of Pollution from Ships member countries have the option to apply certain exemptions to 2017. Canada has chosen not to do so.