GLOBE-Net, July 12, 2015 –  Warning that the world is not on track to limit the global temperature increase to 2 degrees Celsius, the  International Energy Agency (IEA) urges governments to swiftly enact four energy policies that would keep climate goals alive without harming economic growth.

“Climate change has quite frankly slipped to the back burner of policy priorities. But the problem is not going away – quite the opposite,”  IEA Executive Director Maria van der Hoeven said in London at the launch of a World Energy Outlook Special Report, Redrawing the Energy-Climate Map, which highlights the need for intensive action before 2020.

Noting that the energy sector accounts for around two-thirds of global greenhouse-gas emissions, she added: “This report shows that the path we are currently on is more likely to result in a temperature increase of between 3.6 °C and 5.3 °C but also finds that much more can be done to tackle energy-sector emissions without jeopardising economic growth, an important concern for many governments.” 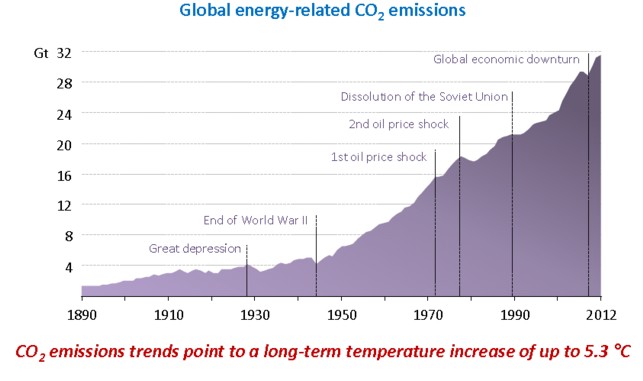 In the United States, a switch from coal to gas in power generation helped reduce emissions by 200 million tonnes (Mt), bringing them back to the level of the mid‑1990s.

China experienced the largest growth in CO2 emissions (300 Mt), but the increase was one of the lowest it has seen in a decade, driven by the deployment of renewables and improvements in energy intensity.

Despite increased coal use in some countries, emissions in Europe declined by 50 Mt. Emissions in Japan increased by 70 Mt.

The new IEA report presents the results of a 4-for-2 °C Scenario, in which four energy policies are selected that can deliver significant emissions reductions by 2020, rely only on existing technologies and have already been adopted successfully in several countries.

“We identify a set of proven measures that could stop the growth in global energy-related emissions by the end of this decade at no net economic cost,” said IEA Chief Economist Fatih Birol, the report’s lead author. “Rapid and widespread adoption could act as a bridge to further action, buying precious time while international climate negotiations continue.”

In the 4-for-2 °C Scenario, global energy-related greenhouse-gas emissions are 8% (3.1 Gt CO2‑equivalent) lower in 2020 than the level otherwise expected. 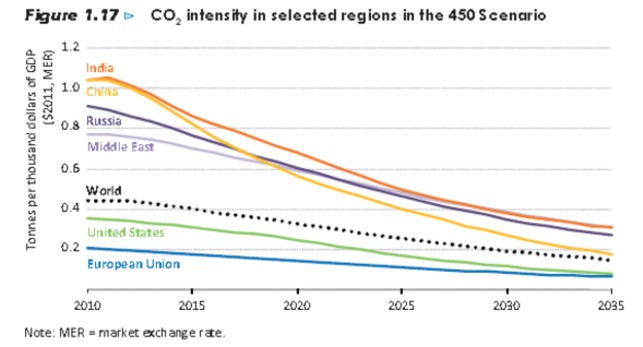 The report also finds that the energy sector is not immune from the physical impacts of climate change and must adapt. In mapping energy-system vulnerabilities, it identifies several sudden and destructive impacts, caused by extreme weather events, and other more gradual impacts, caused by changes to average temperature, sea level rise and shifting weather patterns.

To improve the climate resilience of the energy system, it highlights governments’ role in encouraging prudent adaptation (alongside mitigation) and the need for industry to assess the risks and impacts as part of its investment decisions.

The financial implications of climate policies that would put the world on a 2 °C trajectory are not uniform across the energy sector. Net revenues for existing renewables-based and nuclear power plants increase by $1.8 trillion (in year-2011 dollars) collectively through to 2035, offsetting a similar decline from coal plants.

No oil or gas field currently in production would need to shut down prematurely. Some fields yet to start production are not developed before 2035, meaning that around 5% to 6% of proven oil and gas reserves do not start to recover their exploration costs.

Delaying the move to a 2 °C trajectory until 2020 would result in substantial additional costs to the energy sector and increase the risk of assets needing to be retired early, idled or retrofitted. Carbon capture and storage (CCS) can act as an asset protection strategy, reducing the risk of stranded assets and enabling more fossil fuel to be commercialised.

To see the presentation that accompanied the report’s launch, please click  here.

‘Policies and Programs to Adapt to the Realities of Climate Change’  will be a key topic of discussion at GLOBE 2014, the next in the celebrated GLOBE Series Conferences on the business of the environment taking place in Vancouver Canada, March 26-28, 2014. Reserve your place now.  Check here for more details.