Beijing, China, 24 November 2014 – China can increase its use of renewable energy from 13 to 26 per cent by 2030, according to a new report released today by the International Renewable Energy Agency (IRENA).

The growth in renewable energy use would represent nearly a fourfold increase in the share of modern renewables between 2010 and 2030.

The report, Renewable Energy Prospects: China, prepared by IRENA in association with the China National Renewable Energy Centre, also says China can expand renewables in the power sector from 20 to 40 per cent by 2030, making it the world’s largest renewable energy user.

“As the largest energy consumer in the world, China must play a pivotal role in the global transition to a sustainable energy future,” said Mr. Adnan Z. Amin, Director-General of IRENA, at a launch event in Beijing.

“China’s energy use is expected to increase 60 per cent by 2030. How China meets that need will determine whether or not the world can curb climate change.”

The report is part of IRENA’s renewable energy roadmap, REmap 2030, which provides a plan to double the share of renewable energy in the world’s energy mix by 2030 and determines the potential for China and other countries to scale up renewables in the power sector and end-use sectors like buildings, industry and transport.

The report has acquired special significance following the major announcement by China that it intends to cap carbon dioxide emissions by 2030 and expand the share of non-fossil energy in total primary energy supply to around 20 per cent by 2030 as part of an emission reduction deal jointly made by China and the US.

“China can continue its leadership in renewable energy by accelerating action in this area,” said Mr. Amin. “If China acts now to implement more renewable energy, it can reduce air pollution, enhance energy security, benefit its economy, and play a leading role in fighting climate change.”

[stextbox id=”custom” float=”true” align=”right” width=”300″ bcolor=”e5e5e5″ bgcolor=”e5e5e5″ image=”null”]China has become a global leader in renewable energy. It has vast resources and great potential for future development. In 2013, China installed more new renewable energy capacity than all of Europe and the rest of the Asia Pacific region[/stextbox]

With current policies in place, the share of renewables in China’s energy mix will only rise to 17 per cent by 2030. REmap 2030 estimates that annnual investment of USD 145 billion is needed between now and 2030 in renewable energy technologies to reach the 26 per cent renewables mark – an  annual increase of USD 54 billion beyond business-as-usual.

The higher renewable share will result in an annual savings of USD 55 to 228 billion by 2030 when accounting for factors like human health and reduced emissions. 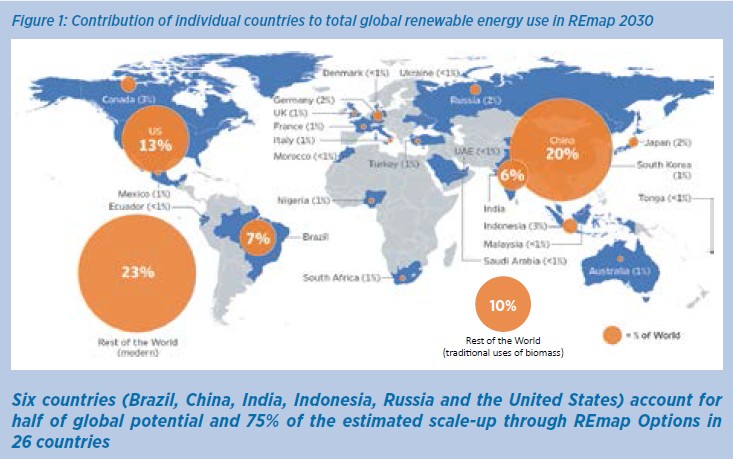 “REmap 2030 shows that China can achieve the energy revolution it’s aiming for – and that it can do so affordably,” said Dolf Gielen, Director of IRENA’s Innovation and Technology Center. “It also gives China a higher goal to aspire to, stating that an energy mix with 26 per cent renewables is achievable by 2030.”

This transformation will also have an important impact on the reduction of air pollution from coal use, a major driver for renewable energy development in China. REmap estimates a decrease of 18 per cent in coal demand in 2030 as compared to business-as-usual.

About REmap 2030
The REmap 2030 report provides a roadmap to double the share of renewable energy in the world’s energy mix between 2010 and 2030. It determines the realistic potential for countries, regions and the world to scale up renewables in order to ensure a sustainable energy future.

REmap 2030 is the first study of worldwide renewable energy potential assembled from the bottom up, starting with separate country analyses, including China, and then aggregating the results to arrive at global picture. – See more at: http://www.irena.org/News

For more information on the Remap 2030 report, including an executive summary in Chinese, please visit: www.irena.org/REmap.