CALGARY, ALBERTA- – July 8, 2014- GE and Suncor Energy announced today the signing of two agreements which provide the opportunity for an investment of up to approximately $18 million. These agreements, involving other members from Canada’s Oil Sands Innovation Alliance (COSIA), are expected to enable the development of new technologies to reduce greenhouse gas emissions and water usage in the oil sands.

One agreement relates to a promising oil sands water treatment pilot project expected to reduce water use, energy consumption and greenhouse gas emissions, while simultaneously reducing capital and operating costs for in situ oil sands operators. An existing partnership between GE, Suncor and Alberta Innovates – Energy and Environment Solutions (AI-EES) has been extended into a Joint Industry Project within the collaboration framework of COSIA.

In addition to this pilot project, six COSIA member companies have also signed a Memorandum of Understanding to pursue other Joint Industry Projects with a potential investment of up to approximately $13 million. These projects are expected to develop technologies leading to even further environmental performance improvements, primarily in the areas of greenhouse gas reductions and advances in water treatment technology.

“Today’s announcements are a step toward a new generation of environmental technologies,” notes Elyse Allan, President and CEO GE Canada. “With the ongoing input of Alberta Innovates – Energy and Environment Solutions (AI-EES), we look forward to collaborating with COSIA member companies to fast-track technology development in Canada’s oil industry, which is an important driver of the country’s economy.”

“We have a world-class resource in Canada’s oil sands that will supply energy for decades to come,” said Steve Williams, Suncor president and chief executive officer.

“And, responsible development of this resource is as important to everyone in the industry as it is to our stakeholders. By collaborating with our industry peers, cooperating with government bodies, and – of course – teaming up with companies like GE who have internationally-renowned technical expertise, we are continuing to take steps toward implementing innovative technologies that will make a difference in continued environmental improvements.” 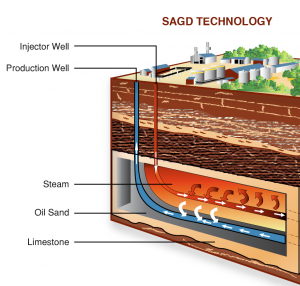 During the in situ process, steam is injected into wells to mobilize bitumen, before being pumped to the surface as a stream of bitumen and condensed steam (water).This stream passes through de-oiling processes to remove most of the bitumen, but the remaining produced water needs further treatment before it can be re-used again as steam.

The SAGD Produced Water Treatment pilot is testing new technology so water can be treated more efficiently, and to enable increased re-use of water within the in situ process.

The additional support from COSIA member companies (as mentioned above) will help extend the pilot’s testing phases to obtain more data, and allow for additional laboratory-scale testing to further refine the processes involved in the pilot. Extending the project to COSIA members will also allow improvements to be shared across the oil sands sector.

Note: Suncor’s Quarterly Report and Management’s Discussion & Analysis dated April 28, 2014 and Suncor’s most recently filed Annual Information Form/Form 40-F, Annual Report to Shareholders and other documents it files from time to time with securities regulatory authorities describe the risks, uncertainties, material assumptions and other factors that could influence actual results and such factors are incorporated herein by reference. Copies of these documents are available without charge from Suncor at 150 6th Avenue S.W., Calgary, Alberta T2P 3Y7, by calling 1-800-558-9071, or by email request to info@suncor.com or by referring to the company’s profile on SEDAR at sedar.com or EDGAR at sec.gov.

The End of Sustainability