In order to limit global warming to 2°C, the limit scientists agree is needed to avoid serious risks of runaway climate change impacts, global economies must cut carbon emissions more than five times the current rate – roughly by 6.2% every year from now to 2100 for every $ of GDP growth.

The reduction target is an estimate of how much countries need to reduce their energy related emissions by, while growing their economies.

For the sixth successive year PwC analysis of the Low Carbon Economy Index finds that the global carbon intensity (greenhouse gas emissions per $GDP) reduction target has been missed. The gap between what countries are doing and what’s needed continues to grow.

Current total annual energy-related emissions are just over 30 GtCO2 and rising, on the back of GDP growth of 3.1%. In the same period, carbon intensity was reduced by only 1.2%, a fraction of what was needed. As a result the global challenge going forward is tougher than before – averaging 6.2% every year, to 2100.

In the Index’s G20 analysis, an unexpected champion surpassed the annual target. Australia recorded a decarburization rate of 7.2% over 2013, putting it top of the table for the second year in a row.

Five countries, however, increased their carbon intensity over 2013 – France, the US, India, Germany and Brazil.

Current rates of carbon intensity means the total amount of carbon the Intergovernmental Panel on Climate Change (IPCC) has advised the world can emit this century to limit climate change to 2°C, will be depleted within 20 years. 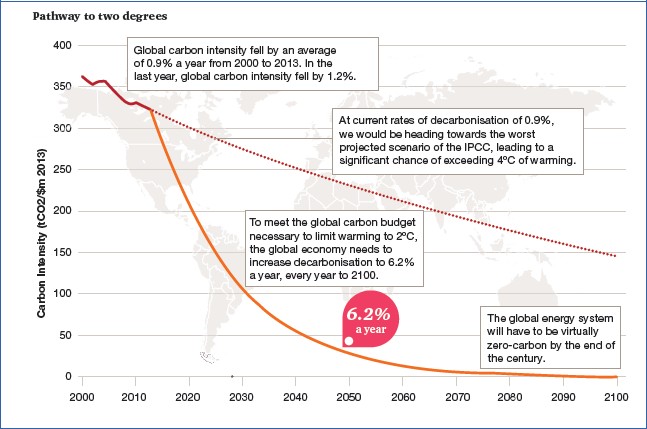 However the analysis shows encouraging signs that momentum is building in critical areas for low carbon economic growth:

The E7 outperformed the G7 in carbon reduction (1.7% vs. 0.2%) for the first time in six years, indicating how it can be possible to maintain economic growth while slowing the rate of growth in emissions.

Leo Johnson, partner, PwC sustainability and climate change said: “After a decade of carbon inertia, we are way behind, and now need to decarbonize at more than five times our current rate to avoid 2°C.”

“But there are reasons for optimism,” he noted. “The E7 has woken up to the business logic of green growth, decarbonizing faster than the G7 for the first recorded time. And globally renewables are emerging fast. As they approach cost parity the stage is set for a policy framework that shifts subsidies away from fossil fuels and accelerates the renewables rollout.”

Making up for the inadequacy to date will be technologically harder, financially costlier, and climactically riskier in the future notes the PwC report, 2 degrees of separation – ambition & reality.

The research is released just two weeks before a UN summit on climate change in New York (23 Sept) to be attended by world leaders, aiming to up the ante on national commitments to reduce GHG emissions.

See GLOBE-Net article “Is this the end or the beginning for global action on climate change?

The PwC research demonstrates the disconnect between the global climate negotiations aiming for a 2°C limit on global warming, but national pledges may only manage to limit it to 3°C, and current trajectory actually on course for 4°C.

The analysis describes as “unforgiving”, the timeline to achieve what is now necessary in terms of carbon emissions reduction: Annual energy-related emissions in the G20 bloc need to fall by one-third by 2030 and just over half by 2050 to stay within the 2°C budget.

For the E7, a carbon intensity reduction of 8.5% per annum is required from 2020, followed by further reductions of 5.3% a year from 2030 to 2050 to stay within the 2°C budget – a fivefold increase on current levels of decarburization.

“What we’ve seen over the past twelve months is a subtle change in the carbon rhetoric. The costs of climate inaction – from flooding to energy costs to commodity pricing, to food insecurity – appear to be growing stronger.”

“A broader recognition is needed by both business and political leaders that taking decisive action to avoid the extremes of climate change is a pre-condition for sustained economic growth,” he added.

BASF’s product portfolio to be evaluated for sustainability