Green bonds usher in a new era of environmental finance

Green bonds are emerging as a frontrunner to fund environmental investment and have garnered a considerable amount of attention from both investors and environmentalists, states TD Economics in a recently released special report.

There is a desperate need for funding of environmental initiatives, and the reality is that governments around the world lack the financial resources to meet all of the current and future requirements.

The natural solution is to attract private sector investment into environmental initiatives, and one way to accomplish this is to issue debt instruments, particularly bonds, with the raised capital dedicated to the initiative.

What is Different about “green bonds”?

“With their exclusive focus on supporting green initiatives, they are a good way to secure large amounts of capital to support many different environmental investments – from renewable energy technologies to public transportation – as was seen with this week’s green bond announcement from the Ontario government.” he added.

While similar in many ways to traditional bonds issued for general corporate use, green bonds differ in that they are monitored to ensure funds are being used to exclusively support environmental projects. This monitoring process is transparent and made available to investors.

Who invests in green bonds?

Institutional investors – such as pension funds, mutual funds, insurance companies and sovereign wealth funds – are the natural market for green bonds. These investors are attracted to bonds because they are long term financial instruments. 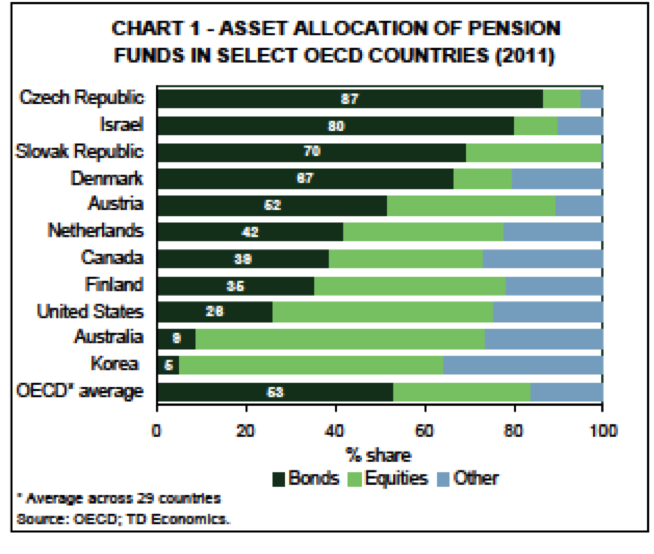 As a result institutional investors hold about 72% of long-term investment in the global bond market, and have significant portfolio requirements for fixed-income investments.

Environmental investments have become a way for institutional investors to adhere to their individual mission statements and reduce risk exposure to the impacts of climate change.

Some of the world’s largest pension funds such as the California State Teachers’ Retirement System have a mandate that incorporates climate risk into their asset allocation and investment strategy , as well as corporate governance voting practises.

Other institutional investors have portfolio requirements for environmental investments.

The report claims that as the environment becomes an increasingly important part of institutional investor decision making, demand for green financial investments will grow considerably.

However, green bonds also have a broad appeal, albeit on a smaller scale, with retail investors who have indirect exposure to bonds through pension and mutual fund holdings.

Environmentally-conscious individuals who manage their own retirement savings, or persons looking for long-term investments may find that green bonds give them an opportunity to support their local communities while meeting fixed income portfolio requirements and enhancing portfolio diversification states the report.

A case in point, some green bonds issued abroad have experienced demand from households. It points out an example of the World Bank issue of green bonds, with specifications tailored to households, targeted specifically at Japanese individual investors.

The outlook for green bonds is very promising. Demand for green bonds is significant and has been growing rapidly over the past six years. Current estimates place the value of the green bonds market between US$10-346 billion – a broad range due to various definitions adopted and the absence of a standardized format.

Investing in environmental projects can often be lucrative for investors. Many green bonds are deemed low risk because they are issued with strong credit ratings and they often generate a higher return than traditional benchmark bonds. In light of the relative outperformance, investors are finding that going green is win-win – it’s good for both the world and their wallets.

One issue the green bond market today faces is a lack of standardization in definitions, format and projects, making assessing its size problematic. But even using the broadest definition, the green bond is small today but has great room to grow.

“Current definition challenges should be conquered as the green bond market matures and grows,” concluded Mr. Alexander. “That being said, structure and return will remain the key considerations for continued success and increased demand.” 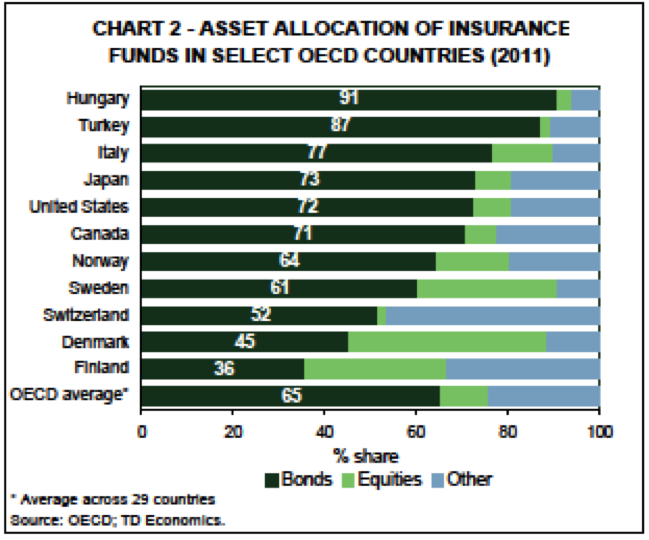 Green bonds can be issued by governments, private corporations, commercial banks and international financial institutions like the World Bank.  In 2008, the World Bank issued its first labeled green bond and since then has made  over 40 issues of green bonds  resulting in US$4 billion.

To date no Canadian municipality has issued a green bond, but the Province of Ontario recently announced that it intends to issue green bonds in 2014. Proceeds will be used to finance infrastructure development such as transportation.

Canadian private corporations have issued slightly more than US$5 billion of  “climate bonds,”  mostly in rail transportation and the renewable energy sector.

Current estimates of the market size for green bonds vary widely, the report cautions, but states that it is anywhere from US$10 billion  to US$346 billion. Some of the variance depends on the different methodologies for defining what exactly constitutes a green bond.

Some promising conclusions can be drawn.

Even though direct comparisons cannot be made across the different estimates of the size of the green bond market as a whole, the report draws some favourable conclusions:

1. The market for green bonds is significant and likely growing rapidly.

2. The multiple issues and reissues of green bonds by institutions suggest that both issuers and investors are generally satisfied with green bonds as an investment vehicle and

3. Gains in issuance are indicative of growth in demand among investors and increased confidence in the products by the issuers.

The Bottom line is that cash strapped governments need to fund environmental initiatives for current and future requirements. One way to accomplish this is to issue debt instruments for environmental capital projects. As the report concludes, “Investors, governments, the financial services sector and environmentalists will all continue to eagerly watch the evolution of green bonds closely, in the hopes that they usher in a new era of environmental financing.”

Innovations in Financing Sustainable Development will be a major topic of discussion at GLOBE 2014 taking place in Vancouver, Canada March 26-28.  Check here for more details.

Conexiones Magazine – A gateway for doing business in Ecuador