How green is your city? And how do you know?

In a new book, an engineer and an architect lay out a program for urban development based on the cold hard facts about environmental sustainability.

by Peter Dizikes, MIT News Office
GLOBE-Net, November 4, 2013
Suppose a real-estate developer in Manhattan is constructing a new office building, and the architect decides to use granite as a primary material. There is a good chance the granite will come from a quarry in Minais Gerais, in southeastern Brazil. From there, it may well be shipped to Carrara, in northern Italy, where much high-grade stone is processed into building-ready form. Then the granite will be shipped to New York, although some of it may be rejected, leading to new rounds of cutting, shipping, and inspections on three continents.

In short, a whole lot of carbon emissions have been produced in the service of that impressive new skyscraper in New York. 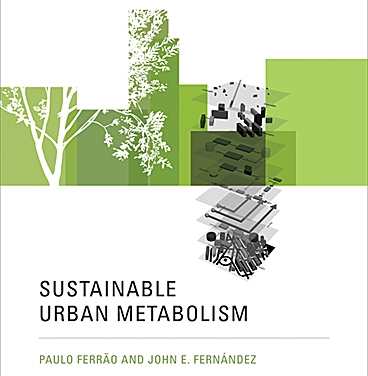 Such an example is “cautionary,” as Paulo Ferrão and John Fernandez write in their new book about making cities more environmentally sustainable. It suggests, they observe, “the ease with which one individual, a well-educated modern professional, can set forth the movement of massive amounts of materials and the expenditure of enormous amounts of energy globally in the effort to provide a service locally.”

For this reason, in the book, “Sustainable Urban Metabolism,” newly published by MIT Press, the authors set out a new program for doing something that has not yet been achieved: understanding just how many resources cities consume, and establishing, in effect, a holistic framework for producing an environmental balance sheet for every city.

“The world needs to make a shift to become more sustainable,” says Ferrão, who is the director of the MIT-Portugal Program and a mechanical engineer by training. “Cities are really the engines of growth, so whatever is going to happen in the world will happen in cities, particularly consumption of material resources.” Indeed, some organizations estimate that about half the world’s people now live in cities, a number likely to increase.

To be clear, as the authors emphasize, actually quantifying the natural resources that a city consumes, and the emissions it produces — the “metabolism” of the book’s title — is a hard problem, because there are so many factors involved. In essence, their book is a blueprint for researching this difficult topic.

After all, when it comes to reducing their environmental footprints, “Cities are under huge amounts of pressure to articulate their paths forward,” says Fernandez, an associate professor of architecture and building technology and engineering systems at MIT, and an expert on the materials used in building construction. “But if they don’t know what they’re consuming now, how are they supposed to articulate environmental targets, such as a 20 percent reduction in carbon emissions in the next 10 years?”

To see how Ferrão and Fernandez want us to change our thinking about cities and the environment, consider the problem from a different angle. Perhaps you live in a metropolitan area that has implemented a few green projects, such as new bikeways or weatherproofing in public buildings. Those things can help reduce carbon emissions and save energy.

But suppose your city has also approved a new development project to expand business and economic growth. Helpful as that growth might be, the new development might easily negate the environmental benefits of all the other piecemeal projects. If public officials, planners, and other citizens want to see net improvements on the environmental front, Ferrão and Fernandez believe, they need a holistic approach with a bottom line showing overall results.

But there are no agencies compiling all the relevant information into handy charts. Just figuring out how to proceed logically represents a large step forward. In “Sustainable Urban Metabolism,” the authors lay out many tools intended to help us gain traction on the subject — such as a 15-part typology of cities, based on consumption of eight different basic resources, emissions, and other factors.

Cities in the developed world tend to produce more emissions, so at one extreme of this framework — Type 15, in the book — lie heavily resource-consuming cities such as Phoenix and Chicago. At the other extreme — Type 1 — are metropolises in developing regions with low resource consumption, such as Jakarta, in Indonesia, and Kinshasa, in the Democratic Republic of Congo. Most world cities, of course, lie in between: What the authors call Type 8, for instance, includes some of the world’s biggest cities, with low electricity consumption, medium-level resource consumption, and ease of access to natural resources: Beijing, Mexico City, and Istanbul, among others.

Being able to standardize data, from world trade statistics and other resources, would help planners grasp what kinds of changes each city needs to become greener.

“If you can quantitatively support this idea of typologies, then you can compare cities and use benchmarking,” Ferrão says. “If you have two cities with similar typologies and one is not as efficient as the other, you need more detailed analysis: Is it a matter of infrastructure, housing, climate, or something else? That is a next logical step.”

Other researchers have responded positively to “Sustainable Urban Metabolism.” John Ehrenfeld, a senior research scholar at the Yale School of Forestry and Environmental Studies, says it contains “a set of powerful practical tools and methodologies for analysts and designers,” while Christopher Kennedy, a professor of civil engineering at the University of Toronto, calls it “beautifully composed and with appropriate technical details.”

The authors express optimism about the topic, even as they note the urgency of the situation. Japanese cities, as the book notes, consume electricity at high levels while maintaining a relatively small environmental footprint, showing that affluence can coexist alongside a more sustainable mode of urban living.

“Our motivation is to be honest about our consumption,” Fernandez says. “Cities are great at creating wealth and, inevitably, increased consumption results. So there really does need to be an effort to study the city itself: how it grows, changes, respires, and consumes resources.”

Building Resilient Cities is a major theme to be discussed at GLOBE 2014, the next in the celebrated GLOBE Series of Conferences and Trade Fairs on the business of the environment taking place in Vancouver Canada, March 26-28, 2014. Reserve your place now. Check here for more details.