Washington, D.C.—-Efforts by a variety of organizations to quantify global support for fossil fuels have generated estimates that range from $523 billion to over $1.9 trillion, depending on the calculation and what measures are included.

What is clear is that the level of support has rebounded to 2008 levels following a dip in 2009-10 during the global financial crisis, writes Worldwatch Research Fellow Philipp Tagwerker in the Institute’s latest Vital Signs Online trend report. (www.worldwatch.org).

While production subsidies predominate in Organisation for Economic Co-operation and Development (OECD) countries, consumption subsidies are favored in developing countries to reduce the burden on poor households’ income, as poor people have to use a greater share of their income to buy fossil fuel products.

The International Energy Agency (IEA) estimates that coal, electricity, oil, and natural gas consumption subsidies in 38 developing economies were $523 billion in 2011. Using a price-gap approach, the IEA figure includes subsidies that bring the price of fossil fuels below the international benchmark.

Subsidies that lower the price just to the international level or slightly above it are not captured. In a parallel study by the OECD, support measures for the production and consumption of fossil fuels in its 24 member countries were inventoried. Using a broader definition than the price-gap method (including direct budgetary transfers and tax expenditures), support for fossil fuels in OECD countries alone averaged $55-90 billion per year between 2005 and 2011. 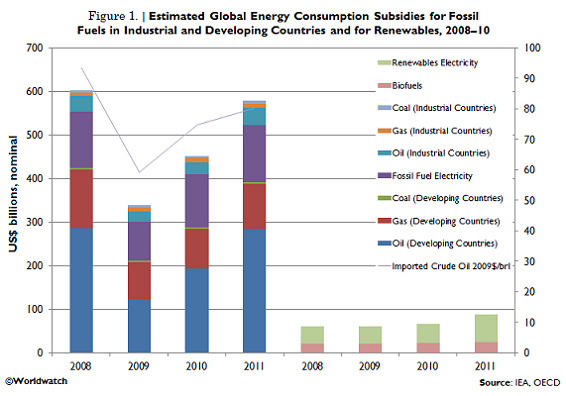 The lack of a clear definition of “subsidy” makes it hard to compare the different methods used to value support for fossil fuels, but the varying approaches nevertheless illustrate global trends. Fossil fuel subsidies declined in 2009, increased in 2010, and then in 2011 reached almost the same level as in 2008. The decrease in subsidies was due almost entirely to fluctuations in fuel prices rather than to policy changes.

Externalities have so far not entered into the calculation of subsidies, although the additional costs associated with increased resource scarcity, the environment, and human health are enormous. Without factoring in such considerations, renewable subsidies’ cost between 1.7¢ and 15¢ per kilowatt-hour (kWh), higher than the estimated 0.1-0.7¢ per kWh for fossil fuels. If externalities were included, however, estimates indicate fossil fuels would cost 23.8¢ more per kWh, while renewables would cost around 0.5¢ more per kWh.

From an emissions perspective, 15 percent of global carbon dioxide emissions receive $110 per ton in support, while only 8 percent are subject to a carbon price, effectively nullifying carbon market contributions as a measure to reduce emissions. Accelerating the phaseout of fossil fuel subsidies would reduce carbon dioxide emissions by 360 million tons in 2020, which is 12 percent of the emission savings that are needed in order to keep the increase in global temperature to 2 degrees Celsius.

Subsidy estimation and transparency initiatives need to be scaled up and consolidated. A common methodology and definition can aid in analyzing the distortions that subsidies cause in the economy and allow for a better-informed dialogue to negotiate their phaseout. The same analysis could help alleviate the political resistance toward fuel price increases, as countries can be guided in their decision making and supported in the reallocation of funds.

Further highlights from the report:

Worldwatch is an independent research organization based in Washington, D.C. that works on energy, resource, and environmental issues. The Institute’s State of the World report is published annually in more than a dozen languages. For more information, visit www.worldwatch.org.

The Changing Energy Landscape will be a major part of the upcoming GLOBE 2014 Conference and Trade Fair taking place in Vancouver Canada March 26-28, 2014. Check here for more details on the Conference sessions and the expert speakers who will be presenting.