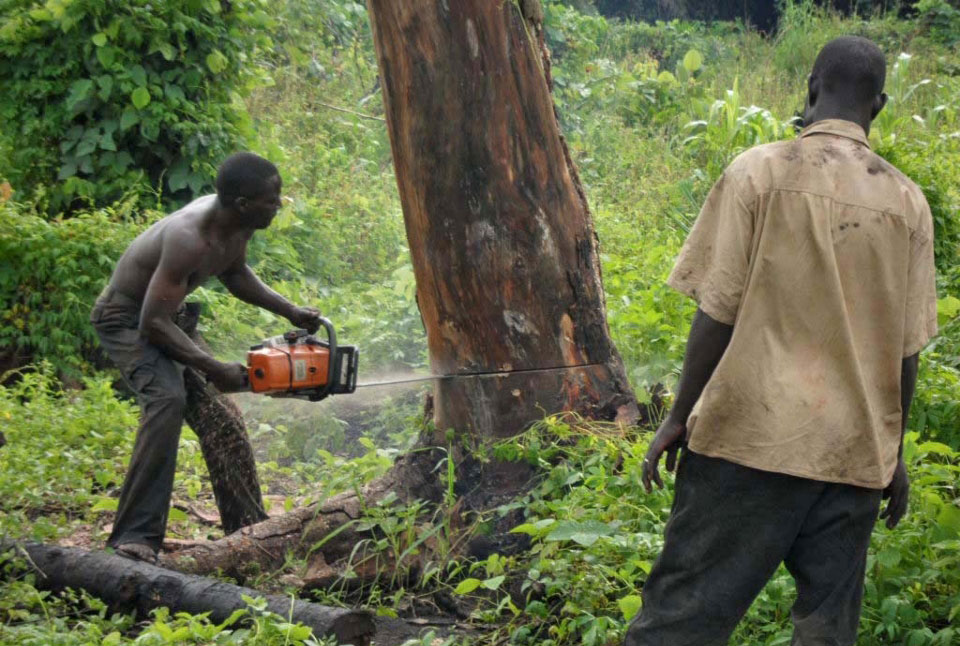 Foreign demand for agricultural products worth an estimated $61 billion annually is driving up the devastating rate at which tropical forest is being cleared illegally – and pushing up carbon emissions.

LONDON, 12 September, 2014 – A report by the US non-governmental organisation, Forest Trends, says 49% of all recent tropical deforestation is the result of illegal clearing for commercial agriculture.

It says that most was driven by foreign demand for agricultural products, including palm oil, beef, soya and wood products – and the impact on forest-dependent people and on biodiversity is “devastating”.

The report, funded by the UK Department for International Development, estimates that the illegal conversion of tropical forests for commercial agriculture produces 1.47 gigatonnes (1,470,000,000 tonnes) of carbon a year − equivalent to 25% of the European Union’s annual fossil fuel-based emissions. NASA said in 2012 that tropical deforestation had accounted for about 10% of human carbon emissions from 2000 to 2005.

“This is the first report to show the outsize role that illegal activities play in the production of hundreds of food and household products consumed worldwide,” said Michael Jenkins, the president of Forest Trends.

The report’s author is Sam Lawson, founding director of the investigative research organisation, Earthsight. He said that the equivalent of “five football fields of tropical forest are being destroyed every minute to supply these export commodities. There is hardly a product on supermarket shelves that is not potentially tainted.”

He said the report’s figures were obtained using conservative estimates based on documented violations of significant impact.

The study says that 90% of Brazil’s deforestation between 2000 and 2012 was illegal, and was caused mainly by a failure to conserve a percentage of natural forests in large-scale cattle and soya plantations, as required by Brazilian law. Much of the deforestation, the study acknowledges, happened before 2004, when the Brazilian government implemented an action plan to reduce deforestation.

Eighty per cent of deforestation in Indonesia was illegal − mostly for large-scale plantations producing palm oil and timber, 75% of which is exported. Brazil and Indonesia produce the highest level of agricultural commodities destined for global markets − many of them winding up in cosmetics or household goods (palm oil), animal feed (soya), and packaging (wood products).

Illegal deforestation is widespread across Asia, Latin America, and Africa.

In Papua-New Guinea, millions of hectares of forest have been illegally licensed for deforestation in recent year, and a recent parliamentary inquiry in the country found that 90% of these licences were issued by corrupt or fraudulent means.

In Tanzania, forests have been illegally razed to make way for jatropha, a plant commonly used to produce biofuels.

“All over the tropics, companies are bribing officials to obtain permits, trampling the legal or customary rights of indigenous peoples and other forest-dwelling communities, clearing more forest than they are allowed, and causing pollution and environmental devastation by flouting the law,” Lawson said.

The report says the international trade in agricultural commodities produced on land illegally converted from tropical forest is worth an estimated US$61 billion annually. The EU, China, India, Russia and the US are among the largest buyers of these goods.

The problem is spreading. The study says that in the Congo Basin, for example, two of the three largest new oil palm projects have been found to be operating illegally. One of these, in the Republic of Congo, is set to double the country’s deforestation rate.

“The current unfettered access to international markets for commodities from illegally-cleared land is undermining the efforts of tropical countries to enforce their own laws,” Lawson said. “Consumer countries have a responsibility to help halt this trade.” − Climate News Network