Presenting their report at UN Headquarters, New York, officials of UN University and the UN Office for Sustainable Development said unmet water goals threaten many world regions and form a barrier to key universally-shared ambitions including stable political systems, greater wealth and better health for all.

Continued stalling, coupled with population growth, economic instability, disrupted climate patterns and other variables, could reverse hard-earned development gains and preclude meaningful levels of development that can be sustained into the future.

Says lead author Bob Sandford, EPCOR Chair, Canadian Partnership Initiative in support of the UN Water for Life Decade: “The consequence of unmet water goals will be widespread insecurity creating more international tension and conflict. The positive message is that if we can keep moving now on water-related Sustainable Development Goals we can still have the future we want.”

Published in the run-up to the adoption this September of universal post-2015 Sustainable Development Goals (SDGs), the report provides an in-depth analysis of 10 countries to show how achieving water and sanitation-related SDGs offers a rapid, cost effective way to achieve sustainable development. 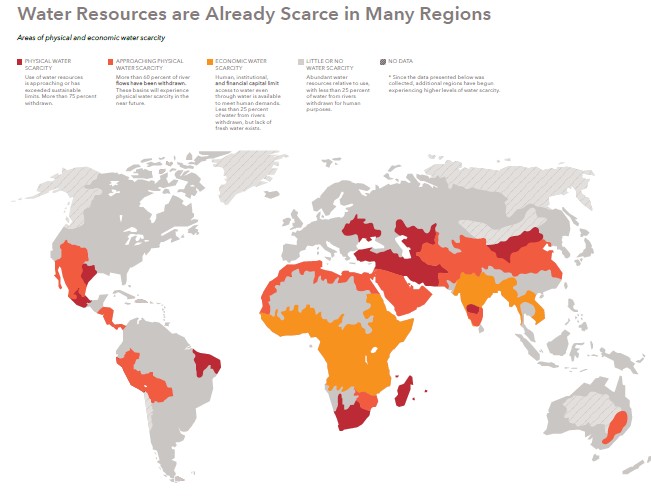 Based on the national case studies, the report prescribes country level steps for achieving the global water targets.

Among top recommendations: Hold the agriculture sector (which guzzles roughly 70% of world water supplies), and the energy sector (15%), accountable for making efficiencies while transitioning to clean energy including hydropower.

Prepared in association with the Global Water Partnership and Canada’s McMaster University, the report says the success of global efforts on the scale required rests in large part on a crackdown on widespread corruption in the water sector, particularly in developing countries.

“In many places … corruption is resulting in the hemorrhaging of precious financial resources,” siphoning an estimated 30% of funds earmarked for water and sanitation-related improvements. 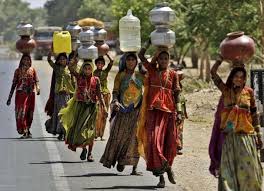 Given accelerating Earth system changes and the growing threat of hydro-climatic disruption, corruption undermining water-related improvements threatens the stability and very existence of some nation states, which in turn affects all other countries, the report says.

“Corruption at any level is not just a criminal act in its own right. In the context of sustainable development it could be viewed as a crime against all of humanity.”

The report notes that the world’s water and wastewater infrastructure maintenance and replacement deficit is building at a rate of $200 million per year, with $1 trillion now required in the USA alone.

To finance its recommendations, the report says that, in addition to plugging the leakage of funds to corruption, $1.9 trillion in subsidies to petroleum, coal and gas industries should be redirected by degrees.

The estimated global cost to achieve post-2015 sustainable development goals in water and sanitation development, maintenance and replacement is US $1.25 trillion to $2.25 trillion per year for 20 years, a doubling or tripling of current spending translating into 1.8 to 2.5 percent of global GDP.

The resulting benefits would be commensurately large, however – a minimum of $3.11 trillion per year, not counting health care savings and valuable ecosystem service enhancements.

Changes In Fundamental Hydrology “Likely To Cause New Kinds Of Conflict”

Sandford and co-lead author Corinne J. Schuster-Wallace of UNU-INWEH underline that all current water management challenges will be compounded one way or another by climate change, and by increasingly unpredictable weather.

“Historical predictability, known as relative hydrological stationarity … provides the certainty needed to build houses to withstand winds of a certain speed, snow of a certain weight, and rainfalls of certain intensity and duration, when to plant crops, and to what size to build storm sewers. The consequence is that the management of water in all its forms in the future will involve a great deal more uncertainty than it has in the past.” 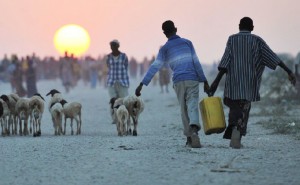 “People do not have the luxury of living without water and when faced with a life or death decision, people tend to do whatever they must to survive … Changes in fundamental hydrology are likely to cause new kinds of conflict, and it can be expected that both water scarcity and flooding will become major trans-boundary water issues.”

And by 2030, expect overall global demand for freshwater to exceed supply by 40%, with the most acute problems in warmer, low-resource nations with young, fast-growing populations, according to the report.

An estimated 25% of the world’s major river basins run dry for part of each year, the report notes, and “new conflicts are likely to emerge as more of the world’s rivers become further heavily abstracted so that they no longer make it to the sea.”

Meanwhile, the magnitude of floods in Pakistan and Australia in 2010, and on the Great Plains of North America in 2011 and 2014, “suggests that the destruction of upstream flood protection and the failure to provide adequate downstream flood warning will enter into global conflict formulae in the future.”

The report cites the rising cost of world flood-related damages: US$53 billion in 2013 and more than US$312 billion since 2004.

Included in the global flood figures: roughly $1 billion in flood damage in the Canadian province of Manitoba in both 2011 and 2014. The disasters have affected the province’s economic and political stability, contributing to a budget deficit, an unpopular increase in the provincial sales tax and to the consequent resignation of political leaders.

[stextbox id=”custom” float=”true” align=”right” width=”300″ bcolor=”d2d0d1″ bgcolor=”dbdbdb” image=”null”]It is common to hear that water is essential for life on Earth. Without its meaningful and effective preservation, our ability to grow, advance and sustain ourselves, as a species, will grind to a halt. This project represents a conscientious attempt to bridge a critical knowledge gap, one which must be crossed if our broaching of sustainable water strategies and actions are to succeed, for without understanding how water is used, we may never fully comprehend how it can be saved. (Canada consultation, 2014)[/stextbox]

UNU-INWEH Director Zafar Adeel and Jong Soo Yoon, Head of the UN Office for Sustainable Development, state: “Through a series of country case studies, expert opinion, and evidence synthesis, the report explores the critical role that water plays (including sanitation and wastewater management) in sustainable development; current disconnects between some national development plans and the proposed SDGs; opportunities for achieving sustainable development through careful water management; and implementation opportunities.”

The report, they add, “fills a critical gap in understanding the complexities associated with water resources and their management, and also provides substantive options that enable us to move forward within the global dialogue.”

The True North, Strong and Ice-Free – A GLOBE-Net Special Report