Washington, D.C.—-There may now be as many as 6.5 million direct and indirect jobs in renewable energy, according to updated data from the International Renewable Energy Agency (IRENA). Earlier assessments had put the global estimate at 2.3 million jobs in 2008 (United Nations Environment Programme) and at 5 million jobs in 2012 (International Labour Organization).

The overall upward trend in renewable energy jobs has been accompanied by considerable turmoil in some industries. Nowhere are the upheavals more noticeable than in the solar photovoltaic (PV) sector, where intensified competition, massive overcapacities, and tumbling prices have caused a high degree of turbulence in the last two to three years, but they have also triggered a boom in installations. Global PV employment is thought to have expanded from 1.4 million jobs in 2012 to as many as 2.3 million in 2013. 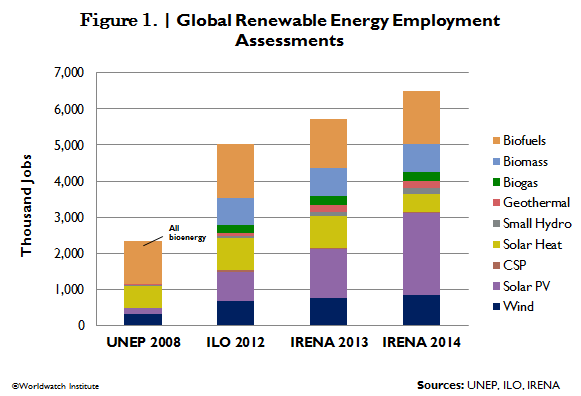 Solar PV has bypassed biofuels (ethanol and biodiesel) as the top renewable energy job generator. Most of the 1.45 million biofuels jobs are found in the growing and harvesting of feedstock such as sugar cane, corn, or palm oil. This involves physically demanding manual work, and workers often contend with oppressive workplace conditions. Processing of the feedstock into fuels offers far fewer jobs, but the ones created are higher skilled and they pay better.

Employment in the next-largest renewables sector, wind power, is estimated to run to some 834,000 jobs. Uncertainty about the future direction of policies in several countries weakened job creation in this field in 2013, leading to a sharp drop in new installations in the United States and to weak markets in large parts of Europe and in India. In contrast, developments in China and Canada were more positive.

Countries that are home to half of the world’s population-China, members of the European Union, Brazil, the United States, and India-account for the bulk of renewable energy employment: 5.8 million direct and indirect (supply chain) jobs out of 6.5 million worldwide.

Better information is necessary for a range of countries to generate a more complete and accurate renewable energy employment picture. Attention is also needed on the question of whether development of renewable energy leads to job loss elsewhere, including in the conventional energy industries.

All in all, available information suggests that renewable energy has grown to become a significant source of jobs. Rising labor productivity notwithstanding, the job numbers are likely to grow in coming decades as the world’s energy system shifts toward low-carbon sources.

Country Highlights from the Report:

About the Worldwatch Institute:

Worldwatch is an independent research organization based in Washington, D.C. that works on energy, resource, and environmental issues. The Institute’s State of the World report is published annually in more than a dozen languages. For more information, visit www.worldwatch.org.

Natural Disasters – Calamity is Not Inevitable