By Ken White and Peter Gunther

February 19, 2015 – The Bank of Canada (BoC), the International Monetary Fund (IMF), the International Energy Agency (IEA) and the World Bank (WB) all have commented recently on the causes and various impacts of the recent substantial fall in crude oil prices.

These organizations based their analysis largely on changing global supply and demand factors including the impact of new tight oil fields in North Dakota and a slowdown in the Chinese double-digit growth to single digits. While OPEC is still a major player, its role is diminished.

What are the Impacts?

The Bank of Canada highlighted the impacts of recent oil price declines as follows:

Global economic growth has fallen far short of the expectations in the aftermath of the financial crisis of 2007–08.  Critical head winds to global economic growth that stem from the Recession seven years ago are still painfully evident especially as “public and private indebtedness at a global level is at a historic high.

While strong progress is occurring in the United States due to timely monetary policies, structural factors suggest that, over the longer term, world economic growth will be slower than in the past”. These structural factors include demographics (aging of populations) and a developing maturity of the Chinese economy.

“It is probably impossible for China to sustain economic growth at the double-digit rates of the 2000s—although its growth rate is still expected to stabilize at an enviable annual pace of 7 per cent for the foreseeable future. “Demand for oil is likely to expand on a slower track than in the past”

While the BoC identified some positive benefits for Canada including lower energy costs, increased discretionary income for consumers and growing international exports attributable to a declining currency, they have concluded that “these gains will be more than reversed over time as lower incomes in the oil patch and along the supply chain spill over to the rest of the economy.

The decline in Canada’s terms of trade will also reduce the country’s wealth. The lower prices, if they are expected to persist, will significantly discourage investment and exploration in the oil sector.”

We agree with the supply and demand analysis that the BoC, IMF and IEA have recently completed on international crude oil markets. However, we disagree with the conventional conclusion that that lower oil prices provide a net contraction to the Canadian economy in spite of greater consumer and business disposable income associated with lower energy costs.

This pessimistic view, in our opinion, underscores critical issues regarding the longer-term benefit of lower energy input costs, especially in Canada’s manufacturing sector and on more discretionary money for consumers.

These savings will likely be used to purchase highly needed machinery and equipment, which will increase Canada’s business productivity and global competitiveness. Unfortunately, these dynamics are not reflected immediately in the National Accounts. It takes time, likely years, for this paradigm shift to be quantified. However, they are real.

In order to illustrate the importance of energy input costs to the Canadian economy we examined mineral fuel intermediate expenditures for the total economy and manufacturing from 2007 to 2011 relative to the WRI per barrel price of crude oil. 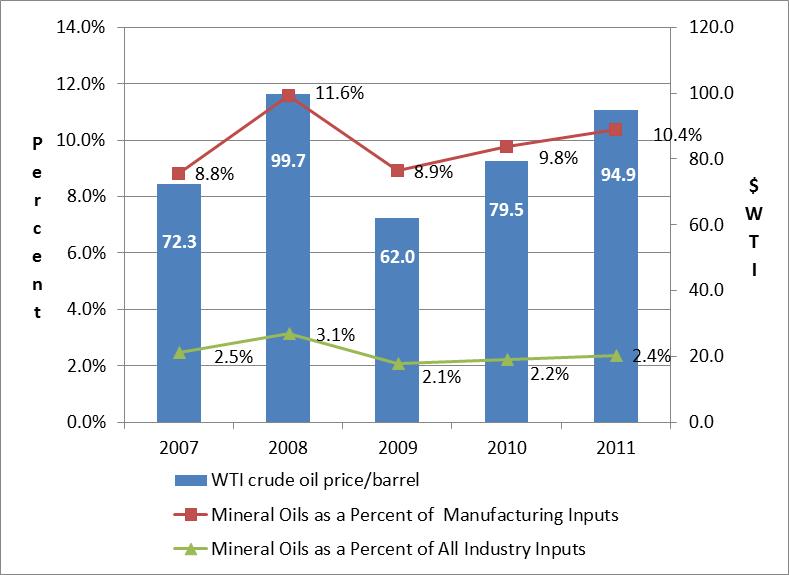 Figure 1: Crude Oil Prices and Mineral Oils as a Percent of Manufacturing and All Industry Input Costs

Mineral Oil relative costs for All Industries in Canada followed a similar trend.

In addition to examining intermediate Mineral Oil expenditures as a percentage of manufacturing input costs from 2007 to 2011 relative to crude oil prices, we analyzed productivity trends in Canada’s manufacturing sector. 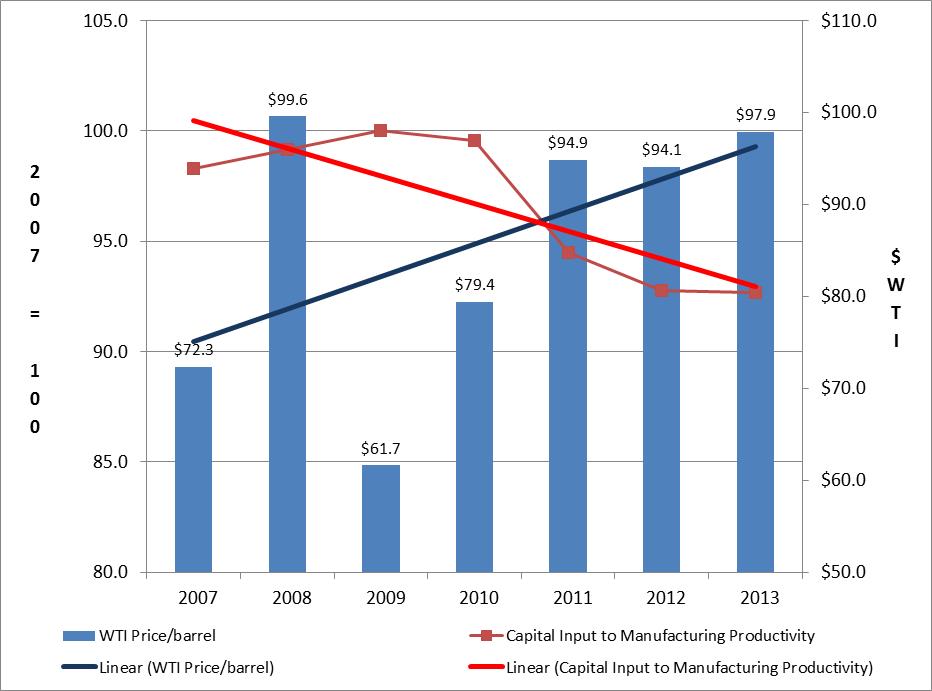 OPEC is a major geopolitical force that substantially influences international crude oil prices. The game is changing, however as ISIS, Al‐Qaeda, and similar organizations are being financed from petro‐dollars. And their arms and weapons are being supplied by oil rich countries. Lower oil prices have the effect of reducing the petro‐dollars flowing to their funders and arms providers.

With very low costs, the Saudis have refused to curtail output in 2014 in the face of increased supplies from Canada and the United States. Oil prices were cut by half. It is totally uncertain when markets will stabilize. Meanwhile investors are incurring considerable risks. The international economy, which had adjusted to high oil prices, is left in disarray, which carries with it its own set of risks.

Crude oil and commodity markets are highly volatile and geopolitical factors are playing a huge role. Canada’s current and future industrial competitiveness resides much better within a framework favouring greater manufacturing and value added rather than on raw resources production.

The recent decline in crude oil prices, while devastating to short-term investments in the “Oil Patch”, may be a blessing in disguise for Canada’s highly energy intensive manufacturing sector.

Speeding up climate action in the transportation sector