Meeting the 2 Degree Global Temperature Goal Can be Done – UNEP

‘Too Little, Too Late’ could be one way to sum up the key message in the latest United Nations Emissions Gap Report assessing what is needed to keep global temperature rise to below 2°C by 2050. But in fact, the message is far more subtle, and more positive than one might assume from reading the press headlines.

The 2013 Emissions Gap Report, released by the UN Environment Programme (UNEP) on the eve the next round of UN climate talks, says what most people already know, namely if we don’t act to lower greenhouse gas emissions, the likelihood of keeping global temperatures below 2°C this century will diminish and that opens the door to all sorts of problems.

What the report really says is that ways do exist to reach the 2oC target, but if we don’t narrow the gap between the current level of emission reduction commitments and what is needed to meet that target, things get dicey in terms of climate mitigation challenges after 2020.

Put another way, the report estimates that even if nations meet their current climate pledges, greenhouse gas emissions in 2020 are likely to be 8 to 12 gigatonnes of CO2 equivalent (GtCO2e) above the level that would provide a likely chance of remaining on the least-cost pathway. 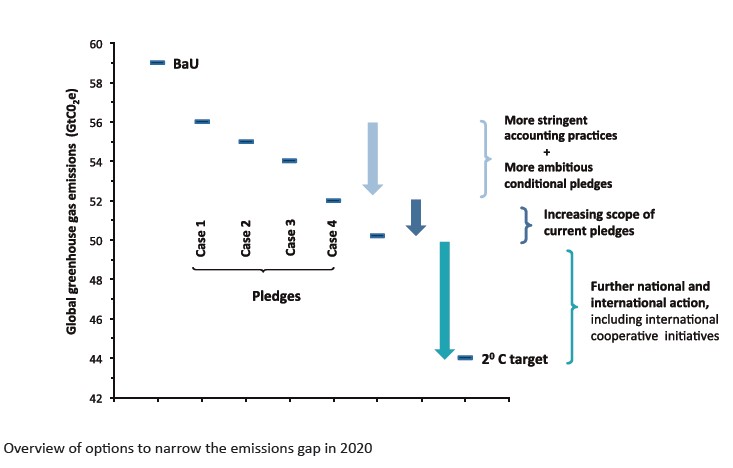 Therein is the subtle message – the least-cost pathway. If we don’t act more aggressively to close this gap or significantly reduce it by 2020, the available options to limit temperature increase to a lower target of 1.5° C will be closed, further increasing the need to rely on faster (and more costly) energy-efficiency improvements and biomass with carbon capture and storage.

As summed up by UN Under-Secretary-General and UNEP Executive Director Achim Steiner, “delayed actions means a higher rate of climate change in the near term and likely more near-term climate impacts, as well as the continued use of carbon-intensive and energy-intensive infrastructure. This ‘lock-in’ would slow down the introduction of climate-friendly technologies and narrow the developmental choices that would place the global community on the path to a sustainable, green future.”

“However, the stepping stone of the 2020 target can still be achieved by strengthening current pledges and by further action, including scaling up international cooperation initiatives in areas such as energy efficiency, fossil fuel subsidy reform and renewable energy,” he added.

“Even agriculture can contribute, as direct emissions from this sector are currently responsible for 11 per cent of global greenhouse gas emissions-more if its indirect emissions are taken into account.”

His message is reinforced by Christiana Figueres, Executive Secretary of the UN Framework Convention on Climate Change. “As we head towards Warsaw for the latest round of climate negotiations, there is a real need for increased ambition by all countries: ambition which can take countries further and faster towards bridging the emissions gap and a sustainable future for all.”

“However, increased national ambition will not be enough to meet the scientific realities of climate change, which is one reason why a universal new agreement-able to catalyze international cooperation-is urgently needed by 2015.”

This target was based on scenarios of action beginning in 2010. But total global greenhouse gas emissions in 2010, the last year for which data are available, already stood at 50.1 GtCO2e, highlighting the scale of the task ahead.

Should the world continue under a business-as-usual scenario, which does not include pledges, 2020 emissions are predicted to reach 59 GtCO2e, which is 1 GtCO2e higher than estimated in last year’s gap report.

Scientists have confirmed the risks of irreversible damage to the environment would increase significantly if the global average temperature rises above 2°C in relation to pre-industrial levels by the end of the century. The latest report of the Intergovernmental Panel on Climate Change confirmed that human activity is ‘extremely likely’ (95 to 100 per cent probability) to be the cause of this warming.

But here is the kicker – Meeting the 2020 goal is possible

Even though the window of opportunity is narrowing, it is still possible to attain the 2020 goal of 44 GtC02e/year through firm and rapid action. Studies reveal that, at costs of up to US$100 per tonne of carbon dioxide equivalent, emissions could be reduced by 14 to 20 GtCO2e compared to business-as-usual levels.

These include covering all emissions in national pledges, having all countries pledge emission reductions, and reducing emissions from international transport.

Adding up the reduction from the tightening of rules, implementing ambitious pledges, and expanding the scope of the current pledges could bring the global community about halfway to closing the gap. The report says that the remaining gap could be bridged by further international and national action, including through “international cooperative initiatives”.

There are an increasing number of international cooperative initiatives, through which countries and other bodies cooperate to promote technologies or policies that have climate benefits, even though climate change mitigation may not be the primary goal of the initiative.

The report identified several areas ripe for such initiatives, with many partnerships already in place that can be expanded and replicated to bring the needed gains:

However, in order for international cooperative initiatives to be effective, the report finds that they must have:

This year’s report pays particular attention to the agriculture sector as, although few countries have specified action in this area as part of implementing their pledges, estimates of emission-reduction potentials for the sector range from 1.1 GtCO2e to 4.3 GtCO2e.

The report outlines a range of measures that not only contribute to climate-change mitigation, but enhance the sector’s environmental sustainability and could provide other benefits such as higher yields, lower fertilizer costs or extra profits from wood supply.

As examples, three key practices that should be scaled-up more widely are highlighted:

Summing up, the UNEP report says we can do it, and if we act now, the costs will be lower overall than what they will be under a ‘business as usual’ scenario.

The Executive Summary to the report is available here

The full report can be downloaded here: