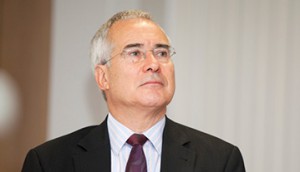 GLOBE-Net, December 10, 2014 – Governments should not insist that a new international agreement on climate change due to be signed at a summit in Paris in December 2015 be an internationally legally-binding treaty.

Rather, says famed climate scientist Lord Nicholas Stern, they should be ambitious, dynamic and collaborative in their negotiations.

Speaking at the start of the second week of the United Nations climate change summit in Lima, Peru, Stern said that “International agreements on climate change should be structured so as to facilitate the kind of collaboration needed to achieve mutual confidence and equitable access to sustainable development.”

“They should be dynamic in the sense that countries’ ambitions for emissions reductions can be encouraged by, and captured in, international processes and in ways that promote increased ambition over time,” he added.

Stern’s comments were drawn from a new policy paper he authored published by the Grantham Research Institute on Climate Change at the London School of Economics and Political Science, where he is a Professor.

He cited Canada’s withdrawal from the Kyoto Protocol as a case in point. “Canada’s penalty for failing to achieve its target was to do more in the second commitment period. However, Canada simply withdrew from the Protocol and avoided that sanction altogether.”

We have to understand clearly that the risks are immense

Stern’s comments in no way minimized the importance of universal action to deal with climate change. He noted that The Paris agreement should explicitly acknowledge that the risks from unmanaged climate change are potentially immense and delay is dangerous.

Writing in the policy paper he noted that human, economic and other activity results in emissions of greenhouse gases that are currently at higher levels than the planet can absorb.

This results in the greenhouse effect where temperatures rise and the climate changes. The effects are in large measure via water, or its absence, in some shape or form: extreme events, including hurricanes and storms, sea surges and sea-level rise, floods and inundations, desertification and so on.

Delay is dangerous, he adds. There is a ratchet effect of GHG concentrations, where flows of GHGs from human activity are continually added to the existing stock of GHGs present in the atmosphere; carbon dioxide is long lasting. The influence of increased concentrations can last for many centuries.

“The window to limit temperature increases to 2°C is still open, but is closing rapidly. Urgent and strong action in the next two decades, with global, deep and economy-wide progress this decade, is necessary if the risks of dangerous climate change are to be radically reduced.”

Indeed strong, notes the paper clear policies are likely to lead to strong investment and innovation and rapid learning and discovery.

The path to a low-carbon economy can be highly attractive, says Stern, embodying strong and high-quality growth, investment and innovation, in the context of rapid global structural transformation.

“The agreement should be based on a shared commitment to creating equitable access to sustainable development. And it should be structured to facilitate dynamic and collaborative interactions between countries,” he said.

Stern suggests the journey to Paris must be constructive and creative. “We are already seeing promising signs such as the joint announcement by the United States and China in Beijing in November 2014, and the adoption of the 2030 climate and energy package by the European Council last month.”

These decisions are important and substantive steps in a sensible direction and suggest seriousness about a strong agreement in Paris in 2015, he notes.

However, taken together, they do not add up to being on track for an emissions path that would mean a reasonable chance of avoiding dangerous global warming of more than 2 centigrade degrees above pre-industrial level.

“All involved are now discussing the possibility of raising ambition on emissions reductions. That is a task of great importance.”

Will be choose the right path forward?

We are at a fork in the road, notes the policy paper. Two remarkable processes are occurring simultaneously over the next two decades: profound structural transformation of the world’s economies, and the transition to the low-carbon economy.

If the former is managed well over the next two decades, in relation to congestion, efficiency, pollution and care of our land and natural resources, then we will do much of what is necessary for the latter and we will create sound foundations for the low-carbon transition which must proceed strongly throughout this century.

That these two periods coincide presents both opportunity and time for decision: an opportunity we can use or lose.

Download Growth, climate and collaboration: towards agreement in Paris 2015

United to advance the fight against climate change