Vancouver, BC, Canada and Birmingham, UK – Nexterra Systems Corp.(www.nexterra.co.uk), a global leader in energy-from-waste gasification systems, announced today that it has signed a contract with MWH to supply a biomass gasification system for the Birmingham Bio Power Ltd. (BBPL) renewable energy power plant in Tyseley, UK.

Developed by Carbonarius, the plant will be capable of producing over 10 MW of renewable electricity for sale to the grid. The project will create more than 100 engineering, project management and construction jobs and 19 full time jobs on site once operational.

The Nexterra gasification system is a cornerstone of the £47.8 million project that will use 67,000 tonnes/year of locally-sourced class A – C recovered wood diverted from landfills to produce steam that will be converted into electricity through a steam turbine and generator system.[stextbox id=”custom” float=”true” align=”right” width=”300″ bcolor=”e5e5e5″ bgcolor=”e5e5e5″ image=”null”]The plant will supply enough electricity to power 17,000 homes and is expected to reduce greenhouse gas emissions (CO2e) by 107,000 tonnes per annum.[/stextbox]

Nexterra will design and supply the complete biomass gasification-to-steam generation system from feedstock handling to emission controls, including four gasifiers, a high pressure boiler, and a flue gas treatment system. 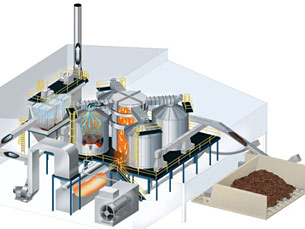 Nexterra’s 1st biomass gasification system in the UK will produce 10 MW of renewable electricity for the BBPL power plant. This illustration shows the inner workings of the system.

The Nexterra system qualifies as an Advanced Conversion Technology (ACT) under UK legislation, meaning that the power generated by the project will receive the highest band of Renewables Obligation Certificates (ROCs).

MWH, a global environmental, engineering and construction services company, will be responsible for construction and installation of the system as well as the balance of the plant, including the steam turbine and associated equipment used to produce the power.

This is Nexterra’s first project in the UK after successfully delivering seven commercial plants in Canada and the United States. Export Development Canada (EDC), Canada’s export credit agency, has provided support for this first UK Project.

Mike Scott, Nexterra President and CEO, commented: “We are very pleased to be selected by MWH, Carbonarius and the investor consortium for our first project in the UK. We believe that this is an attractive market for our gasification solutions and look forward to establishing our energy-from-renewable-waste systems across the UK. Nexterra was first introduced to these UK market opportunities by BAE Systems in2011 as part of its commitment to Canadian industry, so it is rewarding to have signed this contract today.”

Ian Brooking of Carbonarius commented: “Nexterra has demonstrated that they have a proven, robust gasification platform that will handle the wood waste feedstock available in the UK while still meeting the stringent UK emission regulations. We look forward to working with them on this and other projects in the UK.”

Ian Miller of MWH commented: “To execute this project we needed a gasification technology that was proven, reliable and bankable. After looking at different technologies we determined that Nexterra’s technology and track record was the best fit for the project. We look forward to working with them on this project.”

John Rossall, BAE Systems’ Industrial Participation Director, commented: “BAE Systems’ support of Nexterra’s entry into the UK renewable energy market is part of a long-term commitment we have to Canadian industry. Nexterra has a fantastic technology and we are delighted it has secured its first project here. We hope this is just the beginning for Nexterra in the UK and we look forward to continuing our support to its growth in this market.”

Shaun Kingsbury, Chief Executive of UK Green Investment Bank, said: “As the UK works towards its targets to generate more power from green sources, it’s important that we bring on new technologies. I’m pleased the Green Investment Bank has been able to support the first gasification plant of its kind in the UK and hope it offers a positive demonstration effect that others will follow.

“The project also highlights the wider economic benefits of investing in new green technologies with a hundred new jobs to construct the plant, 19 good quality new jobs in its ongoing operation and a long term contract for a local small business.”

Nexterra Systems Corp. is a global leader in plant-scale, energy-from-waste gasification systems for the production of clean, renewable heat and power. The company offers a proven gasification technology with over 150,000 hours of commercial operation and uptime of over 90%. Nexterra’s gasification technology delivers lower costs, higher reliability, lower emissions and greater fuel flexibility compared to conventional biomass energy systems. Nexterra has completed seven commercial projects in Canada and the US, and has completed the sale of its first project in the United Kingdom. www.nexterra.ca

The Changing Energy Landscape will be discussed at GLOBE 2014 taking place March 26-28, 2014 in Vancouver Canada, where practical solutions and innovative emission-reducing technologies will be on display. Check here for more information.

Cleantech To Rebound in 2014