The Joint Review Panel reported in December 2013 that construction and operation of the Northern Gateway Pipelines project was in the public interest, subject to 209 conditions being met by the proponent, Enbridge.

“Moving forward, the proponent must demonstrate to the independent regulator, the NEB, how it will meet the 209 conditions,” said the Minister. “It will also have to apply for regulatory permits and authorizations from federal and provincial governments,” he added, noting that in addition, consultations with Aboriginal communities will be required under many of the 209 conditions established as part of the process for regulatory authorizations and permits.

“The proponent clearly has more work to do in order to fulfill the public commitment it has made to engage with Aboriginal groups and local communities along the route,” said the Minister.

Many First Nations and environmental groups are expected to block the pipeline’s construction through legal actions, protests and possibly by means of a referendum.

“Enbridge and our partners in the Northern Gateway Project welcome today’s decision,” said Enbridge President and Chief Executive Officer, Al Monaco. “The Joint Review Panel recommendation and the GIC approval are important milestones and reflect years of work by all stakeholders,” he added. “However, we have more work ahead of us. The decision is one more step in the process; a process that requires a considered and respectful approach with our stakeholders.”

Today’s decision is the next step in a regulatory process that began in May 2010, when Enbridge submitted its application to the National Energy Board.

Before construction can begin, Enbridge will need to seek approval from the NEB for the detailed pipeline route and location of the final right of way.

As part of this process, it must publish a notice in local newspapers and provide a written notice to all owners of lands proposed to be acquired.  Where objections are filed, the NEB will hold public hearings on the detailed route in the affected areas to consider landowner concerns.

Several municipalities, including Kitimat, Terrace, Prince Rupert, and Smithers have voiced opposition to the project. 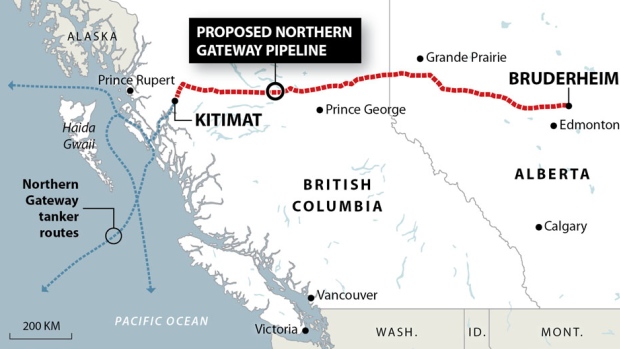 In parallel, Enbridge will need to seek various regulatory approvals from the federal government and the governments of British Columbia and Alberta. Federally, these include:

Enbridge must demonstrate how it will meet the 209 conditions imposed on the project including requirements such as preparing a Caribou Habitat Restoration Plan and developing a research program on the behaviour and cleanup of heavy oils.

In addition before Enbridge proceeds with construction, it must fulfill a public commitment it made to engage with Aboriginal groups and local communities along the route, to better understand their concerns and find ways to address them.

The Joint Review Panel review included feedback from over 1,450 participants in 21 different communities, plus a review of over 175,000 pages of evidence and 9,000 letters of comment.

More information on the 209 conditions in the Review Panel report is available here: