Ontario is failing in fight against Climate Change

Ontario appears to have lost the ambition it once had!

GLOBE-Net, July 14, 2014 – This was the conclusion reached by Ontario’s Environmental Commissioner Gord Miller in his latest report submitted to the Legislative Assembly last week.

Ontario appears to have lost the ambition it once had and needs to get back in the game on climate change, said Miller, in his characteristic no-nonsense style.

“The latest scientific evidence shows that the pace of climate change is accelerating,” says Miller. “Extreme weather events have increased dramatically around the world. Here in Ontario though, the provincial government hasn’t even delivered on commitments it made seven years ago.”

The report shows that the government will likely meet its 2014 target (a 6% reduction in emissions below 1990 levels) largely because of the shutdown of the province’s coal plants. 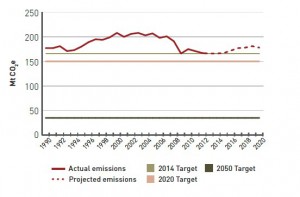 “But it’s not going to meet its 2020 target,” says Miller, “because it has taken very little additional action to implement the Climate Change Action Plan it released seven years ago.”

The Environmental Commissioner points out that transportation, mainly cars and trucks, is the biggest source of GHG emissions in the province.

“The 2007 Action Plan said the government would reduce transportation emissions by 19 megatonnes (Mt) by 2020. That goal, unfortunately, has now been cut by almost 80%. I have been given no reason why, and no explanation about what the Ontario government plans to do instead.”

Miller says the province has lost the leadership position it once had. “British Columbia has brought in a carbon tax, Quebec has implemented a cap-and-trade system for carbon credits.

Meanwhile, Ontario appears to have lost the ambition it once had and won’t even look at directives to ensure more compact urban development or a serious commitment to using electricity for transportation.” 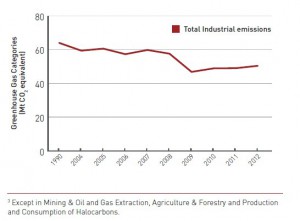 The Environmental Commissioner says society has to end its reliance on carbon-based fuels, especially for transportation.

“We need to limit the increase in global temperatures to 2 degrees Celsius. But that can only be done if we leave two-thirds of the existing oil and natural gas reserves in the ground. People need to understand that brutal fact.”