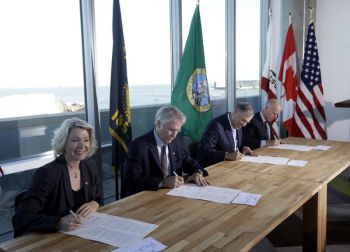 The Hon Mary Polak, BC Minister of Environment, with the Governors of the three Western States

At the end of October, Christy Clark, BC’s Premier, signed a high profile agreement with the Governors of Washington, Oregon and California in which the four leaders make a strong and clear commitment to lead national and international policy on climate change. (1)

What’s in the Small Print?

So what was in the agreement? They affirm their “shared vision of Pacific North America as a model of innovation that sustains our communities and creates jobs and new economic opportunities for our combined population,” and they acknowledge “the clear and convincing scientific evidence of climate change, ocean acidification and other impacts from increasing concentrations of carbon dioxide in the atmosphere.”

This is a bold, courageous statement, of exactly the kind that is needed. So what are they planning to do about it? Their grand declaration contains 15 relevant stories:

1. Put a Price on Carbon

The media is reporting that there will in effect be a common carbon tax. Not quite. BC and California will continue their existing carbon-pricing, while Oregon will build on existing programs to set a price on emissions.

The main news is that Washington State will now set binding limits on GHGs and use market mechanisms to meet them. And “where possible”, the four jurisdictions will link their programs for consistency and predictability. So that’s big news for Washington State. (2)

3. Affirm the Value of Climate Science

Yea! The leaders of all four governments are standing strong behind the new IPCC report, and agreeing to ground their actions in the scientific understanding of climate change. (3)  The IPCC concluded that if we are to avoid crossing the highly dangerous 2°C line in the atmosphere, as a planet, we can only afford to release a further 311 gigatonnes of carbon. Of the known listed carbon reserves of 2,795 gigatonnes, the rest – 80% of the reserves – will need to remain in the ground.

And the four leaders have just signed onto this. Did they know what the IPCC report said? We are currently releasing 10 gigatonnes tonnes a year. Maybe they weren’t briefed on that.(4)

The second report whose findings they are standing firmly behind is Scientific Consensus on Maintaining Humanity’s life Support Systems in the 21st Century, endorsed by 520 leading scientists. This calls for the rapid scaling-up of carbon-neutral energy to replace fossil fuels at a pace that will require specific legislation and policies, and states that if we want even a 50% chance of holding the global temperature rise to 2°C, nations will need to reduce their emissions by 5% per year for the next 38 years.

This is a commitment to work with states and governments around the world to press for an international agreement on climate change at the big annual climate conference in Paris in 2015.

All four jurisdictions share a Pacific coastline, and the ocean is becoming rapidly more acidic as it absorbs the CO2 released by our burning fossil fuels. They agree to enlist support for research, and action to combat it, and will urge their respective federal governments to act. So any action on this file depends on Ottawa picking up the ball.

Oregon and Washington will adopt the low-carbon fuels standards that California and British Columbia have already adopted, and all will work together to build an integrated West Coast market for low-carbon fuels. To the extent that this builds the market for non-sustainable biofuels, it could be counted as bad news, and of marginal climate benefit. But let’s give it the benefit of the doubt since the next commitment covers transportation too.

This is groundbreaking stuff. The four jurisdictions will work to achieve the goal by encouraging public and private fleet managers to buy electric vehicles and continue to invest in electric vehicle charging infrastructure.

In 2012, Canadians bought 1.6 million new vehicles. BC’s population is 13% of Canada’s, so BC’s new-vehicle market in 2012 was 208,000. 10% of this would be 20,000 zero-emissions vehicle being bought a year by 2016. This compares to the sale of 431 EVs in 2011, so it is definitely a welcome and important stretch goal but it’s going to need significant government fleet purchasing to drive the market since it’s a 20-fold ramp-up within three years.

8. Continue the deployment of high-speed rail

The vision lives: the leaders of the four jurisdictions are still committed to high-speed rail.

This is about commercial trucks, buses, rail, ports and marine transportation. The four jurisdictions will develop targets and action plans to accelerate public and private investment, with an eye on biofuels, electricity, natural gas and other low-carbon fuels. Good news if they are electric; not if they are natural gas, since the total emissions from fracked natural gas may be as bad as they are from coal.

10. Lead the way to greater energy efficiency and “net-zero” buildings

Next, we come to buildings. The title includes reference to net-zero buildings, but there’s no further mention in the paragraph. Alas! The governments will work to harmonize appliance efficiency standards, which is excellent. They will also support a policy that ensures that energy efficiency is valued when buildings are bought and sold. That means EnerGuide rating and labelling being required before a house can be sold, which is great news for BC.

It would be good if it could come soon, so that when ‘Pay-As-You-Save’ is rolled out next year on Vancouver Island and in the Okanagan region, as a way of financing a home energy upgrade through a loan on the utility bill, there would be a requirement for anyone selling a house to get it energy-tested and labelled accordingly before it is sold. The step from there to an energy upgrade is relatively small. If there is follow-through, this is good news for BC. The standard home sale Property Disclosure Statement already contains a line item to this effect.

This is about coal-fired power plants in the US, supporting the EPA’s new initiative to regulate greenhouse gas emissions.

This is about finding new ways to finance the upgrade of schools, roads, bridge, dams and sewage plants through a relatively new entity called the West Coast Infrastructure Exchange. The climate resilience component comes through the use of best practices and certification standards. I’m not sure what impact this will have.

This is about scaling up wind, solar and the like (such as run-of-river power) by working with permitting agencies to streamline approvals. Not much in this for BC, since BC Hydro’s new Integrated Resources Plan includes no plans to bring any more renewable energy onto the grid. That may change, and if it does, some streamlining may be useful.

This is about connecting the regional grids to increase utility flexibility and reliability and expand access to renewable energy sources such as wind power. This could signal a willingness by BC to approve with the proposed Sea Breeze 550 MW HVDC transmission line across the Juan de Fuca Strait from Victoria to Port Angeles, enabling BC Hydro to import surplus wind energy from Washington and Oregon at times of wind energy surplus. (6)

15. “This Action Plan shall have no legal effect”

Yes: those are the words of the final clause. It will “have no legal effect; impose no legally binding obligation enforceable in any court of law or other tribunal of any sort, nor create any funding expectation.”

At the end of the day, what does this mean for climate action in BC? This is the final practical tally:

(a) A new target for GHG reductions in BC by 2035
(b) The goal of 20,000 EV purchases a year in BC by 2016
(c) Harmonized appliance efficiency standards
(d) EnerGuide home energy labelling before a property sale
(e) Maybe a willingness to approve better grid connections to the US.

We need these things to happen, and for The Hon. Mary Polak, BC’s new Environment Minister, it’s a good beginning.

And for a transnational agreement of this kind, which probably involved months of complex negotiations between teams from four different jurisdictions, it’s a good beginning.

By 2020, we need to cover a further 2,700 metres. This requires that we run three times faster, at a pace of 385 metres a year. The Pacific Coast Collaborative Agreement will help, but we’re going to need an awful lot more effort if we are to complete the 10 km course by 2020. For some ideas as to how we could increase the pace, see www.earthfuture.com.

Guy Dauncey is a speaker, author and eco-futurist who works to develop a positive vision of a sustainable future, and to translate that vision into action. He is founder and Communications Director of the BC Sustainable Energy Association, co-founder of the Victoria Car Share Cooperative, and author or co-author of nine books, including the award-winning The Climate Challenge: 101 Solutions to Global Warming. He is currently completing a new book titled City of the Future: The View from 2032. He is an Honorary Member of the Planning Institute of BC. His personal website is www.earthfuture.com

A European launch to mark the importance of Industrial Symbiosis