IEA forecast sees renewable power as a cost-competitive option in an increasing number of cases, but facing growing risks to deployment over the medium term

PARIS, 28 August, 2014  – The expansion of renewable energy will slow over the next five years unless policy uncertainty is diminished, the International Energy Agency (IEA) said today in its third annual Medium-Term Renewable Energy Market Report.

According to the report, power generation from renewable sources such as wind, solar and hydro grew strongly in 2013, reaching almost 22% of global generation, and was on par with electricity from gas, whose generation remained relatively stable. Global renewable generation is seen rising by 45% and making up nearly 26% of global electricity generation by 2020.

Yet annual growth in new renewable power is seen slowing and stabilizing after 2014, putting renewables at risk of falling short of the absolute generation levels needed to meet global climate change objectives.

Non-OECD markets, spurred by diversification needs in many countries and increasing air quality concerns in China, in particular, comprise almost 70% of the growth. Renewables are seen as the largest new source of non-OECD generation through 2020.

Yet they meet only 35% of fast-growing electricity needs there, illustrating the still-large role of fossil fuels and the potential for further renewable growth. Renewables account for 80% of new power generation in the OECD, but with more limited upside due to sluggish demand and growing policy risks in key markets.

“Renewables are a necessary part of energy security. However, just when they are becoming a cost-competitive option in an increasing number of cases, policy and regulatory uncertainty is rising in some key markets. This stems from concerns about the costs of deploying renewables,” said IEA Executive Director Maria van der Hoeven.

“Governments must distinguish more clearly between the past, present and future, as costs are falling over time,” she added. “Many renewables no longer need high incentive levels. Rather, given their capital-intensive nature, renewables require a market context that assures a reasonable and predictable return for investors. This calls for a serious reflection on market design needed to achieve a more sustainable world energy mix.”

The report noted that policy and market risks threaten to slow deployment momentum. For example, in many non-OECD markets including China, constraints include non-economic barriers, an absence of needed grid integration measures, and the cost and availability of financing. In the European Union (EU), uncertainties remain over the precise nature of the post-2020 renewable policy framework and the build-out of a pan-European grid to facilitate the integration of variable renewables.

For the first time, the annual report provides a renewable power investment outlook. Through 2020, investment in new renewable power capacity is seen averaging over USD 230 billion annually. That is lower than the around USD 250 billion invested in 2013.

The decline is due to expectations that both unit investment costs for some technologies will fall and that global capacity growth will slow. With decreasing costs, competitive opportunities are expanding for some renewables under some country-specific conditions and policy frameworks. 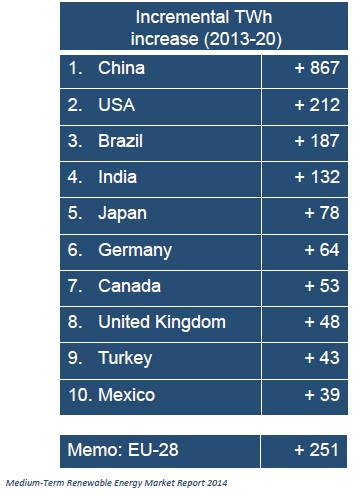 The roles of biofuels for transport and renewable heat are also increasing, though at slower rates than renewable electricity. Uncertainty over policy support for biofuels is rising in the EU and the United States, slowing expectations for production growth and threatening the development of the advanced biofuels industry at a time when the first commercial plants are just coming online.

The annual report highlights the potential energy security implications of energy use for heat, which accounts for more than half of world final energy consumption and is dominated by fossil fuels.

But the contribution of renewables to meet heating and cooling needs remains underdeveloped, with more limited policy frameworks compared with the electricity and transport sectors. Although modern renewable energy sources are expected to grow by almost 25% to 2020, their share in energy use for heat rises to only 9%, up from 8% in 2013.

The Medium-Term Renewable Energy Market Report is part of a series of annual reports the IEA devotes to each of the main primary energy sources: oil, gas, coal, renewable energy and – as of last year – energy efficiency.

Focus On Energy and Water As Global Leaders Gather In Stockholm