How quickly do CO2 emissions start to cause harm? 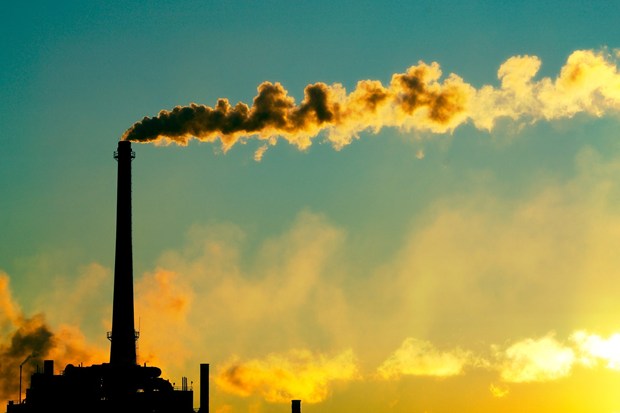 We used to think our grandchildren would suffer the most from CO2 emissions. In fact, the peak impact will occur during the lifespan of the emitter – i.e. you.

GLOBE-Net, December 3, 2014 – It’s well known that carbon dioxide emissions cause the Earth to warm, but no previous study has focused on examining how long it takes to reach maximum warming following a particular CO2 emission.

It is a widely held misconception that the main effects of a CO2 emission will not be felt for several decades. Some studies have estimated a 40 year lag between greenhouse emissions and elevated temperatures.

Even former US Energy Secretary Steven Chu – a Nobel Laureate – has been quoted as saying, ‘It may take 100 years to heat up this huge thermal mass so it reaches a uniform temperature … The damage we have done today will not be seen for at least 50 years’.

Others have suggested it takes several decades for the climate system to fully respond to reductions in emissions.

The climate warming caused by a single carbon emission takes only about 10 years to reach its maximum effect. This is important because it refutes the common misconception that today’s emissions won’t be felt for decades and that they are a problem for future generations.

For the first time, a study conducted by Carnegie’s Katharine Ricke and Ken Caldeira has evaluated how long it takes to feel the maximum warming effect caused by a single carbon emission. Their work is published in Environmental Research Letters.

“A lot of climate scientists have intuition about how long it takes to feel the warming from a particular emission of carbon dioxide,” Ricke said. “But that intuition might be a little bit out of sync with our best estimates from today’s climate and carbon cycle models.” 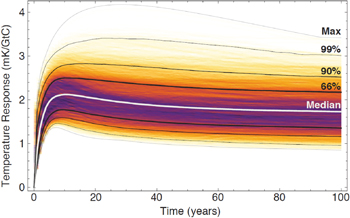 Temperature increase from an individual emission of carbon dioxide (CO2)

Many climate model simulations focus on the amount of warming caused by emissions sustained over decades or centuries, but the timing of temperature increases caused by particular emission has been largely overlooked.

Ricke and Caldeira sought to correct that by combining the results from two large modeling studies one about the way carbon emissions interact with the global carbon cycle and one about the effect of carbon on the Earth’s climate used by the Intergovernmental Panel on Climate Change.

They found that actions taken to avoid emissions today would be felt within the lifetimes of the people who acted, not just by future generations.

“CO2 emissions cause global temperatures to increase for about a decade, but then temperatures stay high for a long time,” Caldeira said. “This means if we avoid an emission, we avoid heating that would otherwise occur this decade. This will benefit us and not just our grandchildren. This realization could help break the political logjam over policies designed to reduce greenhouse gas emissions.”

The authors note, however, that while the warming caused by a single emission reaches a maximum quickly, damage caused by this warming can play out over longer periods, including effects of sea level rise and harm to ecosystems caused by sustained warming.

Quoting from the research paper, the authors note:

Using conjoined results of carbon-cycle and physical-climate model intercomparison projects (Taylor et al 2012, Joos et al 2013), we find the median time between an emission and maximum warming is 10.1 years, with a 90% probability range of 6.6–30.7 years. We evaluate uncertainties in timing and amount of warming, partitioning them into three contributing factors: carbon cycle, climate sensitivity and ocean thermal inertia. If uncertainty in any one factor is reduced to zero without reducing uncertainty in the other factors, the majority of overall uncertainty remains. Thus, narrowing uncertainty in century-scale warming depends on narrowing uncertainty in all contributing factors. Our results indicate that benefit from avoided climate damage from avoided CO2 emissions will be manifested within the lifetimes of people who acted to avoid that emission. While such avoidance could be expected to benefit future generations, there is potential for emissions avoidance to provide substantial benefit to current generations

See video below where Professor Ricke explains the findings of this important research.