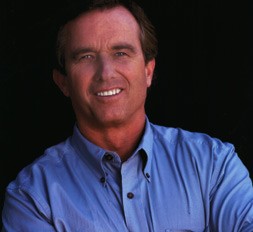 March 6, 2014 – Vancouver, Canada –  The iconic GLOBE Conference, which started in 1990, is known as the quintessential gathering of global senior businesses, investors, environmental advocates and government representatives who meet to network and to advance the key issues at the nexus of global business and sustainability agendas.

The conference has attracted CEOs of companies as diverse as Virgin, Suncor Energy, Royal Bank of Canada, Walmart, GE Canada, Honda and BP to collaborate and engage on solutions that make a difference to our environment, our communities, and make business better. The next event in the GLOBE Series is coming to Vancouver this March 26-28 and promises to be the best event yet.

Robert F. Kennedy Jr, the son of the late Senator Robert F. Kennedy and nephew of President John F. Kennedy Jr, has built a solid reputation as a champion of the environment as the President of the Waterkeeper Alliance with over 150 chapters worldwide. He’s taken that advocacy to free-market capitalism, by becoming a strong advocate for clean technology investment.

As a Venture Partner and Senior Associate in one of North America’s largest venture capital companies investing in clean technology – Vantage Point Capital – Bobby believes that market security – the kind that oil and gas benefit from – is critical for renewable energy and clean technology.

Wal van Lierop, CEO of Chrysalix will share the stage with Robert F. Kennedy Jr.  Wal is an energy technology veteran who has raised over $1 billion for early stage technology ventures. With a long standing passion for clean energy innovation, he has been honoured at number 16 within the Clean Capitalism Top 50, and sits on several clean energy and venture boards.

The talk has been sponsored by Met Gas Industries, a sustainable natural gas exploration company that has developed a unique and patented extraction process for natural gas that does not use chemicals.  “We are honoured to sponsor this event, and the MetGas vision is closely aligned with Mr. Kennedy’s belief in the need for clean technology innovation in the energy space, ” said Jason Leikam, CEO of Met Gas Industries Ltd.

The plenary session and talk will be produced by James Riley, CEO of the Kumu Agency, a leading digital advertising agency which has a practice focused on sustainability and philanthropy for Fortune 500 brands. Kumu Agency partnered with Keppler Speakers in securing RFK’s participation in the GLOBE event.

Robert F. Kennedy Jr. will speak at GLOBE 2014 at the Vancouver Convention Centre on Wednesday, March 26 to an audience comprised of business and government executives from around the world.

GLOBE 2014 is produced by GLOBE Events a member of the Group of companies, a conglomerate of privately-held companies dedicated to the business of the environment. GLOBE’s expertise lies in project management, event development, and management consulting in the fields of environment and energy, urban development, and corporate responsibility. The GLOBE Group is North America’s longest operating producer of environmental events.

Metgas is a Vancouver based natural gas technology company which has developed a successful patented gas extraction technology that is environmentally benign. The Metgas technology process is based on a closed loop system which extracts gas from non-potable gas rich water aquifers. The company does not frack, and does not use chemicals. California, which has some of the strictest environmental regulations in the world, has approved the Metgas extraction process on 1120 leased acres.