A new report from the International Energy Agency (IEA) says the widespread deployment of “smart grids” – networks that monitor and manage the transport of electricity from all generation sources to meet the varying electricity demands of end users – is crucial to achieving a more secure and sustainable energy future.

With current trends in the supply and use of energy becoming increasingly untenable – economically, environmentally and socially – the IEA believes smart grids can play a significant role in enabling nearly all clean energy technologies, including renewables, electric vehicles and energy efficiency.

The report, Smart Grids Technology Roadmap, provides a consensus view from more than 200 government, industry, academia and consumer representatives on the current status of smart grid technologies, and charts a course for expanding their use from today to 2050.

This report is the latest in the IEAs series of technology roadmaps to guide governments and industry on the actions and milestones needed to achieve the potential for the full set of clean energy technologies.

As well as addressing current concerns with existing electricity systems, such as ageing infrastructure and increasing peak demand, smart grids are an important element for expanding the use of a number of low-carbon technologies, such as electric vehicles. But governments need to multiply their efforts.

“We need to see a much more aggressive investment in large-scale regional pilots in order to deploy smart grids at the scale they are needed,” said IEA Executive Director Nobuo Tanaka, speaking at the launch in Paris on 4 April.

“In addition to funding regional pilots, governments need to establish clear and consistent policies, regulations and plans for electricity systems that will allow innovative investment in smart grids. It will also be vital to gain greater public engagement. This can be done by educating all relevant stakeholders – but especially customers and consumers – about the need for smart grids and the benefits they can offer.” 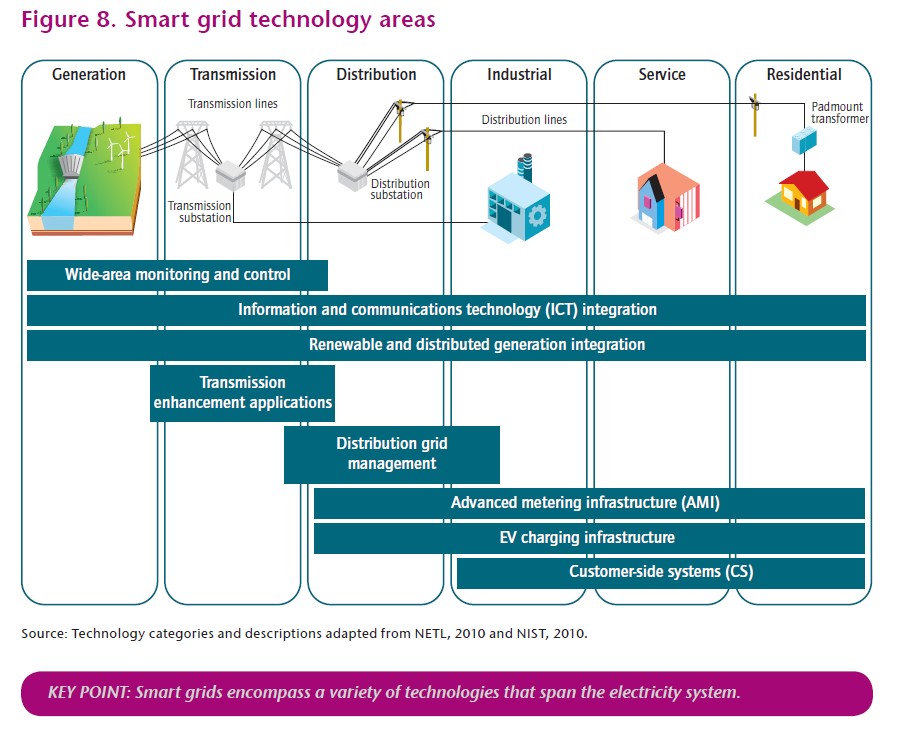 The report recommends that smart grids play a critical role in the deployment of new electricity infrastructure in developing countries and emerging economies.

As well as enabling more efficient operations, grids can also help to keep downward pressure on the cost of electricity, the report says.

It also outlines the potential for smart grids in rural areas of developing countries further down the line. “Small remote” systems – not connected to a centralised electricity infrastructure and initially employed as a cost-effected approach to rural electrification – could later be connected easily to a national or regional infrastructure, ” says David Elzinga, the reports author and an Energy Technology Policy analyst at the IEA.

The report adds that smart grids could be used to get electricity to sparsely populated areas by enabling a transition from simple, one-off approaches to electrification (e.g. battery-based household electrification) to community grids that can then connect to national and regional grids.

While many countries have plans to develop smart grids, the report argues that there is a need for increased co-ordination to enable countries to share lessons they have learned on a global basis.

The report recommends greater international collaboration in sharing experiences of pilot programmes and in leveraging national investments in the development of required technology.

It also stresses a need to develop common standards between countries that will help optimise and accelerate both the development and deployment of necessary technology while at the same time, reduce costs for all stakeholders; namely governments, industry, and the public.

“Major international collaboration is needed to expand research, development, demonstration and deployment investment in all areas of smart grids – but especially in the development of standards, policies, regulations and business models,” says Mr Elzinga.

What is a smart grid?

While there are different interpretations, the IEA defines a smart grid as an electricity network that uses digital and other advanced technologies to monitor and manage the transport of electricity from all generation sources to meet the varying electricity demands of end users. Smart grids co-ordinate the needs and capabilities of all generators, grid operators, end users and electricity market stakeholders to operate all parts of the system as efficiently as possible, minimizing costs and environmental impacts while maximizing system reliability, resilience and stability.