PARIS, 29 September — The sun could be the world’s largest source of electricity by 2050, ahead of fossil fuels, wind, hydro and nuclear, according to a pair of reports issued today by the International Energy Agency (IEA).

The two IEA technology roadmaps show how solar photovoltaic (PV) systems could generate up to 16% of the world’s electricity by 2050 while solar thermal electricity (STE) from concentrating solar power (CSP) plants could provide an additional 11%.

Combined, these solar technologies could prevent the emission of more than 6 billion tonnes of carbon dioxide per year by 2050 – that is more than all current energy-related CO2 emissions from the United States or almost all of the direct emissions from the transport sector worldwide today.

“The rapid cost decrease of photovoltaic modules and systems in the last few years has opened new perspectives for using solar energy as a major source of electricity in the coming years and decades,” said IEA Executive Director Maria van der Hoeven. “However, both technologies are very capital intensive: almost all expenditures are made upfront. Lowering the cost of capital is thus of primary importance for achieving the vision in these roadmaps.”

The Executive Director also stressed that the two reports do not represent a forecast. As with other IEA technology roadmaps, they detail the expected technology improvement targets and the policy actions required to achieve that vision by 2050, highlighting priority actions and milestones for governments, research and industry stakeholders. 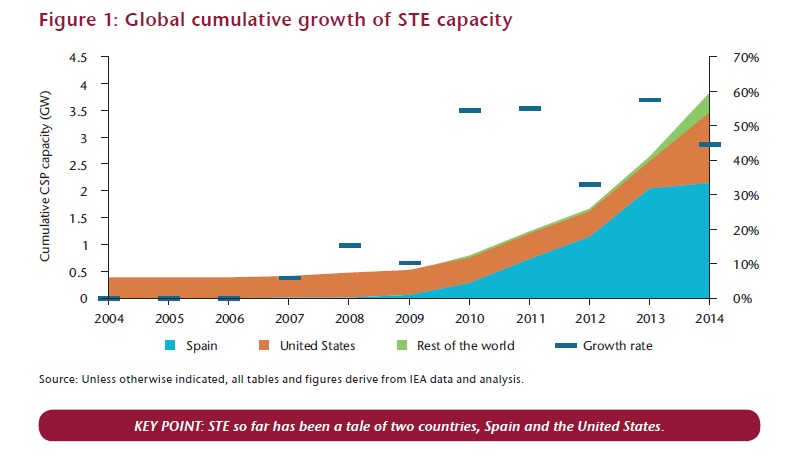 A central message in both publications deals with the need for clear, credible and consistent signals from policy makers, which can lower deployment risks to investors and inspire confidence.

“By contrast,” Ms. Van der Hoeven said, “where there is a record of policy incoherence, confusing signals or stop-and-go policy cycles, investors end up paying more for their investment, consumers pays more for their energy, and some projects that are needed simply will not go ahead.”

The two documents underline the complementary role of the two technologies. With 137 GW of capacity installed worldwide at the end of 2013 and adding up to 100 MW each day, PV deployment so far has been much faster than that of STE, mainly thanks to massive cost reductions.

Under the scenario described in the roadmaps, most of the growth of solar electricity comes from PV until 2030. However, the picture changes afterwards. When reaching shares between 5% and 15% of annual electricity generation, PV starts to lose value in wholesale markets.

Massive-scale STE deployment takes off at this stage thanks to CSP plants’ built-in thermal storage, which allows for generation of electricity when demand peaks in late afternoon and in the evening, thus complementing PV generation.

PV expands globally, with China being by far the leading country, followed by the United States. Over half of total capacity is situated at the final consumers’ place – whether households, shopping malls or industries. STE expands in very sunny areas with clear skies, becoming a major opportunity for Africa, India, the Middle East and the United States. 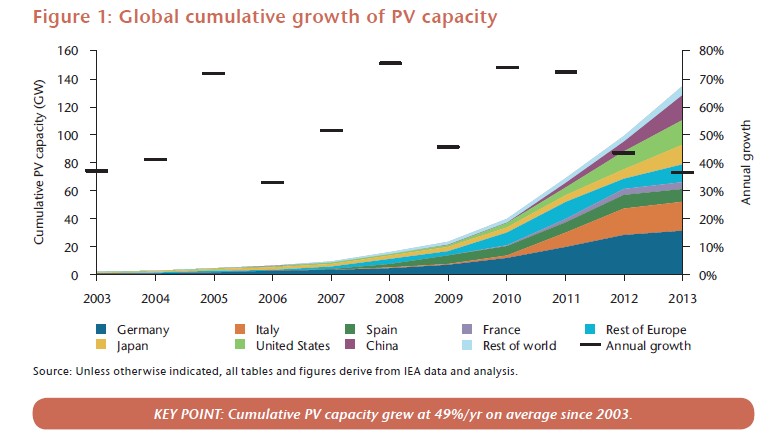 Both roadmaps provide a vision for deployment based on updated modelling results consistent with the IEA’s Energy Technology Perspectives 2014 and its “high-renewables” climate-friendly scenario. Each publication also offers a set of key actions for policy makers for the next five years.

For both solar PV and STE, these key actions include: setting or updating long-term targets for deployment; developing streamlined procedures for providing permits and connection; and implementing remuneration schemes that reflect the true value for power systems.

Boundary Dam – A Carbon Capture and Storage First for Canada