GLOBE-Net, February 8, 2015 – That is a key question asked in a February 2nd Press Release from Wood Mackenzie, a world leader in commercial intelligence for the energy, metals and mining industries.

Just as shale extraction technologies took oil and gas markets by storm, solar technologies too hold the potential to turn gas and power markets on their heads, according to Wood Mackenzie’s latest outlook.

“Since the widespread collapse of solar module prices over the past six years, the role of solar in the North American power market has snowballed from a science experiment and a niche technology at best, to a key renewable competitor to wind power, a regional threat for non-renewable technologies, and a potential disruptor of utility business models and the power industry at large. Just as shale extraction technologies reconfigured oil and gas markets, no other technology is closer to transforming power markets in a similar fashion than distributed and utility-scale solar.”

Since the late 2000s and early 2010s, module costs have driven rapid declines in installed solar costs, notes the release. During the last few years, module costs have gone from comprising nearly 40% of the installed price to just fewer than 20%.  As such, the cost of building solar plants has fallen and Wood Mackenzie expects this trend to continue. 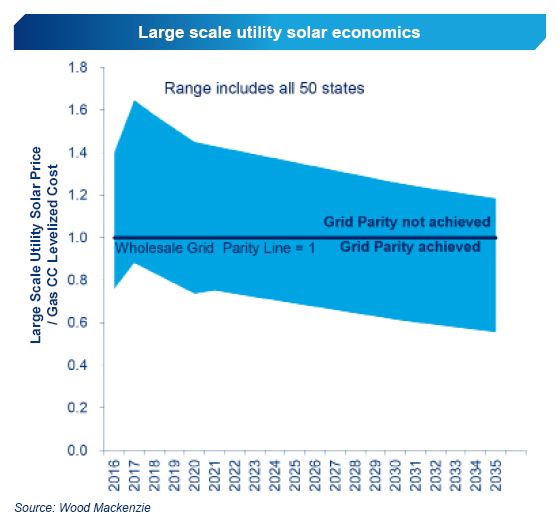 “With module costs at historical lows, efficiency improvement has become the next frontier as the best way to reduce balance of system and labor costs as less panels  produce similar output levels,” notes Ghosh.

“Thus, while more efficient solar technology may command a higher module price, the capacity gains per square meter usually make high-efficiency modules more economic on a $/W basis. That said, savings will also be driven by changes outside of manufacturing. Non-module costs will increasingly depend on heightened downstream competition, market structuring and regulatory redesign.”

Wood Mackenzie underscores that efficiency improvements are not the only technological advances that could push the game forward. New photovoltaic materials like perovskite, creative applications of photovoltaics in building material, windows, and even paint are some of the technologies that could conceptually have an impact.

“While these technologies are nowhere near commercial availability at the moment, photovoltaics have a promising potential as an immensely versatile source of power generation” says Chad Singleton, Senior Analyst for Americas Power & Renewables Research at Wood Mackenzie.

The reach of solar in the market is now well beyond California alone and is expected to grow across multiple markets.  Wood Mackenzie’s outlook emphasizes that the levelized costs of solar energy are already at grid parity* in many states and will continue to fall while combined cycle costs, in contrast, remain on the rise.

By 2020, solar energy in 19 states is expected to reach grid parity with twice as many states reaching grid parity by 2030.  Wood Mackenzie has identified many evolutionary parallels to shale and believes that solar has the potential to make a similar scale of transformation across markets.

Wood Mackenzie’s forecast for the US assumes 26 gigawatts (GW) of distributed solar and about 45 GW of large scale solar by 2035, which totals over 71 GW of solar. Ghosh adds:

“While the potential for solar energy penetration could be much larger in North America, reliability concerns, legal statutes, and other factors could limit growth prospects. There is little material linkage between lower oil prices and solar energy penetration. However, the indirect impact of lower oil prices on drilling activity and consequent gas prices could potentially hurt solar economics.”

Current wholesale market structures are not designed to accommodate large amounts of solar energy. Should solar energy penetration rapidly increase, other forms of capacity will still be necessary to meet needs during low-solar hours such as night time and periods of heavy cloud cover, Wood Mackenzie asserts.

Keeping backup capacity on the grid becomes increasingly difficult as solar energy lowers power prices and worsens the economics of other technologies.  Thus, Wood Mackenzie emphasizes that today’s energy and capacity market design and compensation mechanisms will need to evolve to maintain reliability.

“Similarly, rate design on the retail side will need to change. Solar rooftops reduce the need for grid-connected power but do not eliminate it.  Thus, issues around assigning fixed cost charges to maintain the grid have and will continue to arise” Ghosh concludes.