New report finds stronger climate policies needed to encourage a switch away from coal use, and a reduced role for natural gas in a carbon-constrained world

GLOBE-Net, October 27, 2014 – A new study commissioned by the Pacific Institute for Climate Solutions (PICS) and written by the Pembina Institute concludes liquefied natural gas (LNG) use won’t help the problem of global climate change in the absence of stronger policies internationally that limit carbon pollution.

Without stronger policies that limit carbon, the study finds demand for coal, oil and natural gas continues to increase, pushing the world toward dangerous climate change.

The report uses scenarios that limits atmospheric concentrations of greenhouse gas to 450 parts per million (ppm), representing an acceptable chance of avoiding 2°C of warming. It contrasts these results with “Business as Usual” scenarios, which fall between 650 and 850 ppm by 2100.

The report notes that the policies required to give the world a reasonable chance of avoiding dangerous climate change — commonly held as being less than 2°C of global warming — would cause three main shifts in the global energy mix:

1. less demand for all fossil fuels relative to business as usual,
2. less overall energy demand because of better energy efficiency, and
3. more demand for renewable and nuclear energy.

Such policies would see a slight increase in natural gas in the short-term, peaking around 2030. Gas use then falls below current levels by mid-century due to a drop in overall fossil fuel demand. 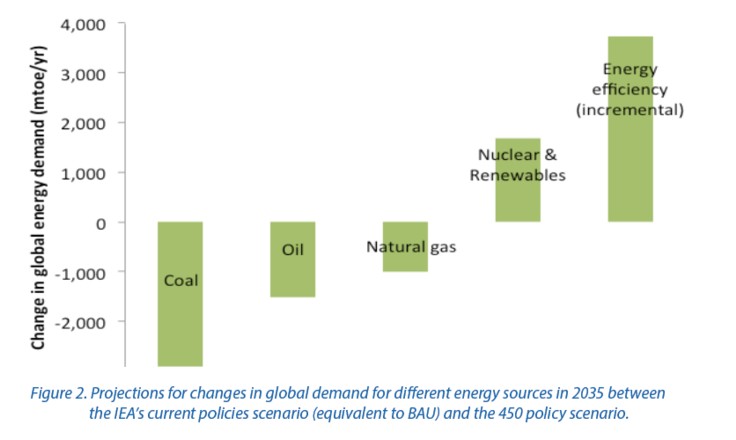 The study, prepared mainly as a commentary on British Columbia’s strategy to promote the use of LNG as a bridge fuel, states that given the climate policies currently in place globally, the B.C. government’s claim that LNG will necessarily displace coal use is inaccurate.

By considering coal and gas in isolation, the study suggests B.C. is ignores the broader mix of competing energy sources.

“Natural gas is often described as a bridge fuel. The question is, how long should that bridge be?” says Josha MacNab, B.C. Regional Director for the Pembina Institute. “Our research suggests it must be very short if we’re going to be able to get off the bridge in time to avoid the worst impacts of climate change.”

The authors make three recommendations for the B.C. government:

“The science is clear that we need to stay within two degrees of warming to avoid the worst impacts of climate change,” says Dr. Tom Pedersen, Executive Director of the Pacific Institute for Climate Solutions. “It is imperative that the global community implement the kinds of policies we need to stay within this limit and that will mean that the role for natural gas is reduced.”

The overall policy message emerging from the report is that holding GHG concentrations in the atmosphere to 450 ppm, or 2°C, will require strong climate policies such as putting a price on carbon pollution, phasing out fossil fuel subsidies and creating GHG emissions standards for power plants.