World Food Day, October 16, 2013, gives everyone an opportunity to focus on what a sustainable food system might look like. 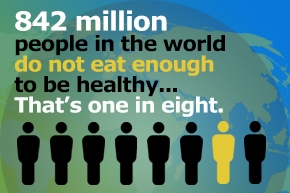 Healthy populations depend on healthy food systems made up of the environment, people, institutions and processes by which agricultural products are produced, processed and brought to market.

The Food and Agricultural Organization of the United Nations (FAO) explains that, “Addressing malnutrition requires integrated action and complementary interventions in agriculture and the food system, in natural resource management, in public health and education, and in broader policy domains.”

Canada has made increasing food security to developing countries a priority.

“We also contribute actively to the G-8 New Alliance for Food Security and Nutrition, which aims to bring 50 million people out of poverty over 10 years.” 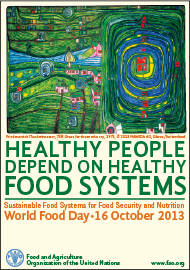 The FAO has a free eBook that addresses the multi-dimensions of food security, “The State of Food Insecurity in the World 2013″. It tells of some progress that has been made in reducing world hunger. For example the number of 842 million people is lower than the 868 million reported with reference to 2010–12. The total number of undernourished has fallen by 17 percent since 1990–92.

This series raises awareness about global hunger issues, discusses underlying causes of hunger and malnutrition and monitors progress towards hunger reduction targets established at the 1996 World Food Summit and the Millennium Summit.

“The State of Food and Agriculture 2013”  is another free eBook from the FAO. It offers several key messages that address the complex causes of malnutrition stating that; “malnutrition requires a multisectoral approach that includes complementary interventions in food systems, public health and education.”

Another program is “Feeding Minds, Fighting Hunger,” a global education initiative designed to prepare and encourage young people, and their leaders and teachers, to become actively involved in helping create a world free from hunger and malnutrition.

Feeding Minds was created by a group of 10 international partners and non-profit organizations including the World Bank, the International Food Policy Research Institute (IFPRI), the American Federation of Teachers and the National Peace Corps Association – led by the FAO and the U.S. National Committee for World Food Day

Together they have created a “global classroom”  – an interactive forum to discuss the key issues of hunger, nutrition and food security.

About the FAO and World Food Day: here

Get the free FAO eBook, The State of Food Insecurity in the World 2013 here

Get the free FAO eBook, The State of Food and Agriculture 2013 here

The Future of Global Food Security will be a major issue discussed at GLOBE 2014, the next in the celebrated GLOBE Series of Conferences and Trade Fairs on the business of the environment taking place in Vancouver Canada, March 26-28, 2014. Reserve your place now.  Check here for more details.

Air pollution a leading environmental cause of cancer deaths