Sustainable Production in the Movie Industry

GLOBE-Net, November 21, 2014 – Governments, industries, and corporations have made strides to integrate sustainability into their policies and operations. Recent examples are the mandatory transparency by the European Union and Singapore Stock Exchange and declarations by corporate leaders at the UN Global Climate Summit in New York to reduce their carbon footprints.

The ripple effect of these actions sets a precedent for similar initiatives in all industries.

The motion picture industry is already in the game. Studios and regional consortiums in popular film production centers such as Vancouver, Los Angeles, and London are incorporating sustainable production practices that take into consideration environmental, social, and economic issues, but despite the high profile visibility of the film industry, this push for more sustainable film production practices is not widely known or appreciated.

In British Columbia, sustainable production dates back to the 2006 creation of Reel Green.  Presently housed at Creative BC, an independent agency responsible for promoting the development of creative industries, Reel Green provides tools and information for companies and individuals wishing to produce motion pictures in an environmentally responsible manner.

Vendors such as Keep it Green Recycling and Green Spark Group have emerged to help productions with recycling and greenhouse gas (GHG) accounting. Tomorrowland (Walt Disney Pictures), filmed in Vancouver, is a recent example of a production that employed an environmental steward and achieved a 91% waste diversion rate from landfills by following a comprehensive zero waste initiative.

In the Los Angeles area, 20th Century Fox, NBC Universal, and Sony Pictures are examples of studios that are sharpening their focus on sustainable production.

This blockbuster is touted as the most eco-friendly film in the history of Sony Pictures and has grabbed attention in publications like The Hollywood Reporter.  Altogether, The Amazing Spider-Man 2 saved an estimated $400,000 by going green.

Sustainable production of motion pictures is not confined to North America. Overseas, the British Academy of Film and Television Arts (BAFTA) is aggressively encouraging sustainable production through a consortium of 12 of the UK’s largest production companies and broadcasters. Consequently, the Academy has its own carbon calculator, certification scheme, and a nonprofit organization named Media Greenhouse that promotes sustainable production practices in the industry.

Films produced in North America and the UK only represent part of the global movie industry. According to the UNESCO Institute of Statistics, an average of approximately 6,200 feature films have been produced globally each year since 2005. There are a growing number of international examples of the shift away from business-as-usual practices.

When thinking about filmmaking closer to home in British Columbia, Creative BC notes that in the reporting year ending 31 March 2014, there were 248 film and television productions shot in BC with budgets totaling $1.447 billion CAD. Additionally, the Vancouver Economic Commission includes Film and Television Production as a key business sector with an estimated 36,000 total direct and indirect full-time-equivalent jobs generated.

Cost savings associated with sustainable production practices increasingly are being highlighted as part of the film project’s business case.

Green Screen Toronto led the way in 2009 by publishing Green Practices Handbook, one of the first industry reports to note cost savings due to sustainable practices on large feature films. This report focused on consumptive uses of supplies. 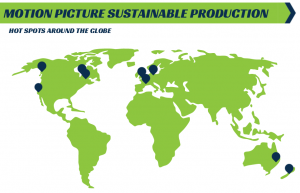 For example, feature productions can use hundreds of thousands of pieces of paper for scripts and revisions, call sheets, and office activities. By reducing office paper use by 20% and printing double-sided, a production could save approximately $17,500.

In the construction department, reducing set construction by 20% and then reusing 25% of the material could save approximately $20,500.

Just this year, Going Green & Saving Green: A Cost-Benefit Analysis, a report meant to spread awareness about sustainable filmmaking, was published by PGA Green, a nonprofit organization formed by the Producers Guild of America in 2009. This analysis estimated a run-of-show budget line savings of 60% was possible by such simple measures as using rechargeable batteries and a 50% savings on the water budget by switching from plastic water bottles to five gallon water jugs.

Despite the evidence that sustainable film production can save money, sustainable production documentation, transparency, and coordination in the motion picture industry remains a rather new concept.

While the development of these efforts might seem daunting, organizations like the U.S. Green Building Council and their well-established Leadership in Energy and Environmental Design (LEED™) suite of rating systems may serve as models for the motion picture industry to organize and strengthen the sustainable production movement worldwide.

The organization of an industry-wide performance assessment that includes sustainable production best practices from around the world could provide consistency across film productions, a platform for documentation and a coordinated approach to greening the screen.

Being green could play a leading role in the global movie scene.

Zena Harris is co-founder of Green Spark Group, a sustainable production change agency in Vancouver, BC. She has a master’s degree from Harvard University in Sustainability and Environmental Management and experience running large, international, multi-stakeholder projects and consulting with the corporate sector. She may be contacted at zena.harris@greensparkgroup.com