Taking on the challenges of an increasingly electrified world

May 12, 2014 – Electricity will increasingly power the world’s economies in the 21st century, rivaling oil as the dominant energy carrier, according to a new report by the International Energy Agency. Actively managing this transformation is the only way to ensure we meet global energy security and climate goals economically, the report says.

The report, Energy Technology Perspectives  (ETP 2014), offers a comprehensive, long-term analysis of trends in the energy sector and of the technologies that are essential to achieving an affordable, secure and low-carbon energy system.

ETP 2014 also features the IEA’s annual progress report on global efforts to engineer a clean-energy transformation. It shows that while clean energy technology deployment in emerging economies has rallied over the past year – making up for declines in the industrialized world — the overall picture of progress remains bleak. Indeed, the level of progress described in the 2014 report is arguably less than what was documented in the IEA’s previous tracking report.

“Electricity is going to play a defining role in the first half of this century as the energy carrier that increasingly powers economic growth and development. While this offers many opportunities, it does not solve all our problems; indeed, it creates many new challenges,” said IEA Executive Director Maria van der Hoeven, who launched the report during the Fifth Clean Energy Ministerial meeting in Seoul.

“We must get it right, but we’re on the wrong path at the moment,” she added. “Growing use of coal globally is overshadowing progress in renewable energy deployment, and the emissions intensity of the electricity system has not changed in 20 years despite some progress in some regions. A radical change of course at the global level is long overdue.”

[stextbox id=”custom” float=”true” align=”right” width=”300″ bcolor=”d2d0d1″ bgcolor=”dbdbdb” image=”null”]“Growing use of coal globally is overshadowing progress in renewable energy deployment, and the emissions intensity of the electricity system has not changed in 20 years despite some progress in some regions. A radical change of course at the global level is long overdue.” IEA Executive Director Maria van der Hoeven[/stextbox]

ETP 2014 presents three scenarios to show how the global energy system – and especially electricity production and use – could evolve between now and 2050. In all of its scenarios, the IEA sees electricity’s role in the energy system growing faster than any other source. The main scenario, the 2 Degree Scenario, or 2DS, aligns with Intergovernmental Panel on Climate Change analysis and demonstrates the actions needed in the energy sector to limit the rise in global temperatures to no more than 2 degrees C. The 2DS reflects a concerted effort to drastically reduce current dependence on fossil fuels: under the 2DS, electricity overtakes oil products to become the dominant final energy carrier.

The report finds that an additional USD 44 trillion in investment is needed to secure a clean-energy future by 2050, but this represents only a small portion of global GDP and is offset by over USD 115 trillion in fuel savings. The new estimate compares to USD 36 trillion in the previous ETP analysis, and the increase partly shows something the IEA has said for some time: the longer we wait, the more expensive it becomes to transform our energy system. Attracting capital investments will be key to financing the transition to a clean energy system, but higher capital costs (despite lower operating costs) of low-carbon technologies mean investors will need support to alleviate their exposure to a shift in risk profiles. 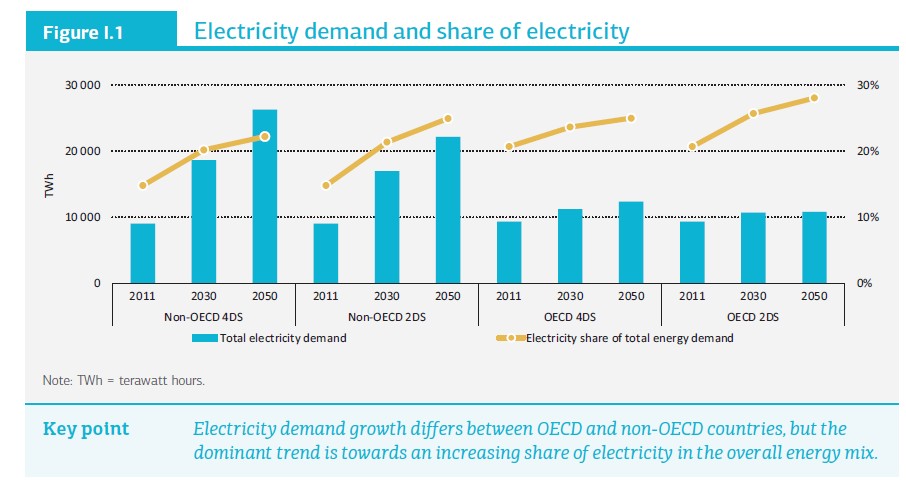 ETP 2014 notes that the energy goals of emerging economies may be different than those of the developed world, and therefore require different approaches. For example, very few countries face challenges of the magnitude that confront India in its quest to maintain strong economic growth while providing electricity to its 300 million citizens who currently lack access. In a chapter devoted to India, ETP 2014 examines the institutional and structural barriers that are hampering the much-needed expansion of the country’s power sector. 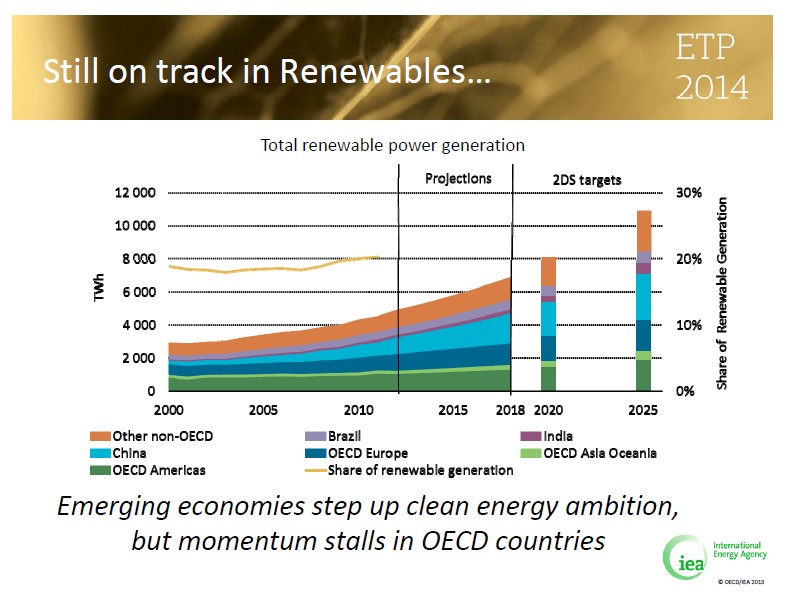 The analysis in ETP 2014 provides decision makers from governments and industry alike with the vision to unlock new opportunities to enhance the efficiency, security and reliability of the energy system, while reducing the cost of the required infrastructure, and carbonizing the overall energy supply. But to identify and resolve all the challenges of this transition, ETP 2014 demonstrates that the decision-making process needs to be revised, abandoning the short-term, siloed attitudes of the past, and embracing a longer-term systems approach that identifies synergies within all sectors of the energy system.

How to define measure and use energy efficiency