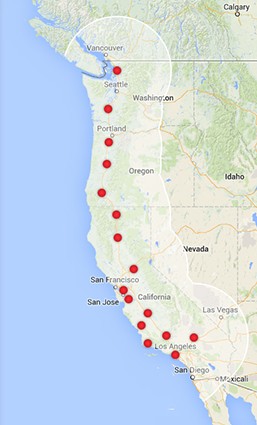 More than 99 percent of Californians and 87 percent of Oregon and Washington owners are now within 200 miles of a Supercharger.

Tesla Superchargers are substantially more powerful than any other charging technology in the world, capable of charging Model S 20x faster than most public charging stations. Superchargers deliver up to 120 kW DC (Direct Current) power directly to the Model S battery, providing half a charge in as little as 20 minutes.

Superchargers are strategically placed along major highways connecting city centers. Stations are located where customers want to stop, near amenities like roadside diners, cafes and shopping centers, so owners can stop for a quick meal while their Model S charges for free.

This morning in San Diego, two Model S will embark on a 1,750 mile #DriveFree road trip to Vancouver powered only by Tesla Superchargers.

The journey will take them through Santa Barbara, San Francisco, Sacramento, Mt. Shasta, Portland, Seattle, and Vancouver, with stops at popular destinations such as the Santa Monica pier, Monterey Bay and the world famous Pike Place Fish Market.

New Optimism for a Cleantech Future

Where do I park my EV to get a charge?